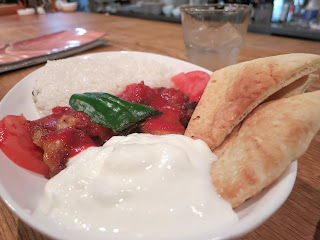 On Thursday I went out to have dinner, and since I had to go back to the university to work late after that I tried some restaurants just outside the campus. They were all full. It is the start of the Japanese school year now (it starts in April) and all the student clubs and circles are trying to get new students to join them. This means taking first year students to restaurants around the campus area, every night...

I tried three different restaurants that all sent me away, but at a Turkish place I used to go to a lot a few years ago had space for me. The food is very nice, and the owner is fun to talk to. He is from Turkey but has lived something like 15 years in Japan.

Then I went back to our lab and worked until 1:30 a.m. writing a paper that my professor will publish as his paper (for funding related technical reasons, I am told), manually redoing lots of calculations for a program that another colleague wrote but that he though "would take too much time" if he had to fix his program to do the calculations etc. properly himself... Not a great evening. But I worked a lot of overtime every evening this week, so it was not a big surprise.

Since there are no more trains after midnight, I went home by jogging (about 35 minutes), which at least sounds healthy :-) There was a storm brewing, and a few signs and similar things that had been ripped away were flying around, so it was a bit exciting to dodge stuff like that too.
Posted by Jonas at 2:55 PM