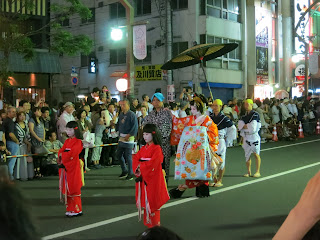 Yesterday our Susukino festival started here in Sapporo. Last year our magic bar participated and had a barbecue stand. It was way too much work, so everyone agreed that "never again!"...


This year I changed into a yukata and walked over to take a look at the other stalls in the streets, and see some of the events going on. I arrived just in time for the "oiran parade". Oiran (花魁) were Japanese high level courtesans. The oiran parade of the festival were two women selected because of their beauty and walking abilities in oiran clothes, if I understood the announces correctly. There were also people portraying "the husband", helper girls, and other roles.


Lots of people were gather to watch and take photos, so it was difficult to get good pictures.

After they had passed me, I went around looking at the food stalls. One place served Turkish shishkebab, so I sat down there. It turned out to be in the same group of restaurants as an Italian place I often go, so they recognized me there.


I also kept running into customers from our magic bar. Some of them told me that our boss in the magic bar was also drinking at some other place, though it took me over an hour before I found him (since he also kept moving around). 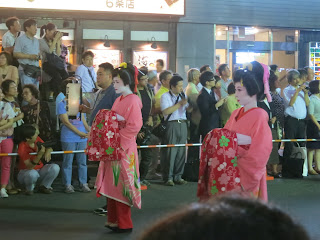 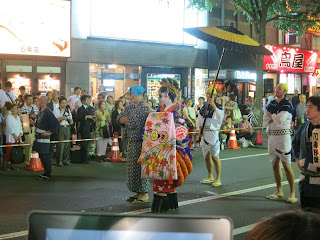 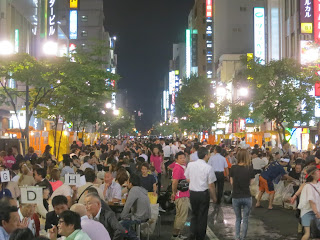