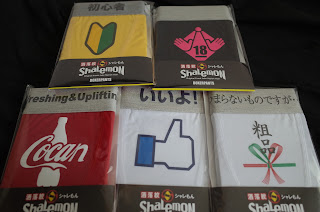 The red one could be read as a Japanese abbreviation of  "Cola can" (a can of Coca Cola) but also is the word meaning "crotch". The other two are the ones I already had, the Facebook symbol but the text changed to "green light tonight!" instead of "like" by changing one letter, and the Japanese present wrapping for very unpresuming gifts.
Posted by Jonas at 7:35 PM