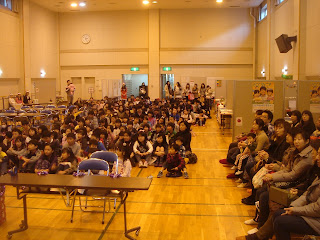 On Sunday I did a volunteer magic show for over 100 kids (and over 40 grownups). The English conversation school ECC had a Christmas party at the Toyohira Kumin Center. There is a huge stage there that was quite nice to use. 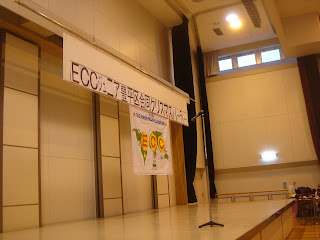 I showed up early to the party (my show was the final point in the programme) and played with the kids for two hours before doing the magic show. I was introduced as a native speaker of English (which was a surprise to me, haha) and as "Dr Hato". That is my user ID and mail address for many of my digital accounts, since I am a doctor (Ph.D. in computer science) and since Jonas comes from the Hebrew word for dove (as in the symbol of peace) and that would be "hato" in Japanese. It is not really a name I use when talking to people though, but they asked if they could introduce me like that and I said fine.

I did a 15 minute show for the kids and despite the angles being quite severe (people where mainly in front, but there were people behind, and to both sides as well, and some were looking more or less from underneath...) everything went well. The kids seemed very happy.

After the show, a girl of about five years came up to me and scolded me though. She said, "So you can speak Japanese! If you can speak Japanese, why didn't you talk to me in Japanese from the start?!"... :-) Well, I had been asked to speak English to all the kids since it was an English conversation practice thingy that held the party. Doing magic in English is difficult for me since I am not used to it, and impossible for the kids to follow along with anyway, so the magic show I did all in Japanese. The girl thought that for communication purposes it would be better to chose a language where we both are fluent enough to understand each other :-)
Posted by Jonas at 5:11 PM