We spent an hour or so in a bar with people wearing interesting clothes. There was a snake crawling around on the bar counter, but they said it was shy and "never" bit people (it was also a non-poisonous snake, so getting bitten would "just" hurt, not be dangerous). Seemed like an interesting place, with lots of interesting people working there. 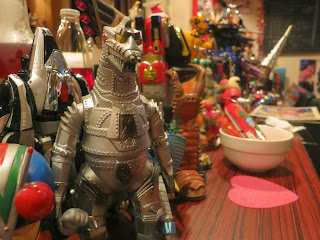 We also went to an anime-nerd-bar, where the staff were dressed in anime character costumes, and the whole place was filled with plastic figures. It turns out to be the very bar that I met people from at the plastic model competition I went to in August (the people who sold me the "eat me" cookies). The two girls working on Monday were not at the event, but they had heard stories about a "weird foreigner in a crazy t-shirt", which sounds like me...