In need of a new facial expression

My birthday started on a high note (actually, the partying started about 15 minutes before it technically became my birthday) with cake and two of my friends. The rest of the day was less exciting, and I ended up staying at work until quite late, and got home at around ten in the evening. I was thinking of going out to eat, but since no one wanted to join me and I was a bit tired, I had a luxurious dinner consisting of one "CalorieMate", all alone. This makes it possibly even more lonely than last years birthday dinner, which I spent with a fake dove that I made myself, haha.

Anyway, when dressing up as a zombie for Halloween, lots of people want to take pictures of themselves together with me. When being a zombie, a good pose is never a problem. You can pretend to bite the other people, or you can look generally scary.

With my latest face painting experiment, people also came up and wanted to take photos of themselves with me. I still have not figured out a good pose. A big problem is that I am not really sure what it was supposed to look like. It was kind of supposed to be a broken porcelain doll, but it does not look very much like that. The best photo from that day is when I am sitting in the subway, pretending not to notice the camera. My second favorite is me holding a fork.

I am thinking maybe the same style can be used for a clown/jester/harlequin instead. Then it would also be easier to figure out what clothes to wear (but not easier to get hold of such clothes, perhaps).

Having nothing to do on my birthday, I spent the few hours after work trying out facial expressions at home. Clowns should perhaps be smiling? 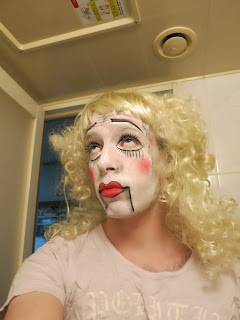 I also got hold of a wig. It is probably made for girls trying to look like blond girls (Japanese girls are generally not blond, and even if they bleach and color their hair, it never really becomes blond). My friend told me it makes me look like an 80-ies heavy metal band member if I put it on when not having painted my face. After painting my face, it kind of makes me look like Dee Snider.

Before going to bed, I also learned that if you glue fake eyelashes to your face, you should consider doing that before painting your face white. While the face paint washes of easily, mixing the paint with glue or putting glue on top of the paint actually makes it really REALLY hard to get off...
Posted by Jonas at 4:11 PM