I went to "Cafe Tout le Monde" and their Halloween party, which is a very nice place. I know the people that run the place, and at the Halloween party there was one more person that I knew too.

The party was very nice. There was lots of very good food, the price was cheap, and there were funny games and funny people. There were also Swedish things placed around the room, a Mumin book in Swedish (and another one in Finish) and a Dalahäst.

There were games of charades, an impromptu salsa lesson, and other things. I was asked to do a short magic show, so I hammered a nail into my nose and determined which card had been selected by a girl dressed like Alice in Wonderland.

Other interesting things that happened included a group of weirdly dressed people suddenly coming into the cafe, taking out iPads and taking pictures together with some of us and then leaving. They were from a different Halloween party (of course).

One girl was dressed in a Japanese "kigurumi" (roughly translates as "wearable stuffed animal", meaning a pajama like suit usually looking like Pikachu or some other animal or anime character). When asked what she was supposed to be, she claimed to be a bat. Everyone else kept calling her "momonga" (a flying squirrel). I think they were all wrong. She had a devil like tail, and as far as I know, neither bats nor flying squirrels have hooked tails like that. She looked more like the Night Fury in "How to train your dragon" to me, so I thought she was some Japanese cartoon monster like that.

After the party I left for the subway. I just missed my train, and since it was quite late I had to wait for a long time for the next train. So long that six other people from the party showed up, ready to take the same train. The reason they were so much later than me was that they had changed into normal clothes. They all thought I was a complete nut for going home without washing off the face paint. 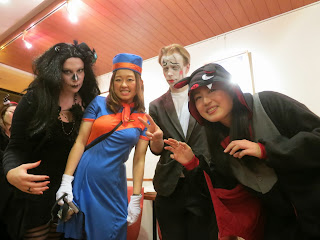 They also said that "you meet a lot of strange [in a good way] people at Cafe tout le monde". There are lots of foreigners there, and that in itself is strange. But they said: "You meet a lot of weird people there, but you are number one" to me... I said that indeed many (of my few) friends tell me I am a weirdo. They said that they meant it more like "unique" than "barking mad", but I think they were mainly trying to be polite. And while they are not wrong (by the Japanese standard of what behavior is weird), I was a bit surprised that they thought so after just this party. I did not really do that much at the party, and I did not tell any of the stories of weird things I have done. Maybe it was the hammering a nail into my nose? Going to a Halloween party and looking weird is surely allowed, since it is a dress up party.

In the subway, some of the other people were going many stops in the same direction I went. Since they thought it was weird to ride the subway with a face like mine, they also took photos of me in the subway. And they were kind enough to explain to me that: "This girl that does not know us and that is laughing very much, she is laughing at you". Which I already knew, but still it was nice of them to explain such things.