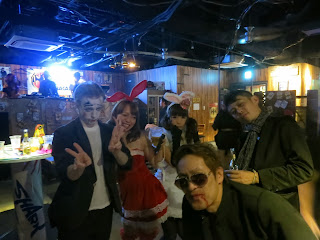 After having been photographed in the subway because I looked weird, I also went to Afro Play, a bar close to where I live. I know some of the people working there.


When I got to the Halloween party it was already quite late, and since it was a Sunday not that many people where still partying. The people there were still having lots of fun, though.


I saw some nice costumes. I liked the Mario costume of a Japanese girl. She had a kind of fat suit (no Japanese girl is as fat as Mario) instead of looking like "sexy Mario" which was common on Saturday. She also had glasses and a mustache that were pixellated like low resolution graphics. I like that kind of attention to funny details.

I met some guys that talked to me about Sweden. One of them said that his name was Larsson (a common name in Sweden, but he meant it specifically as the soccer player Henrik Larsson) so I said my name was Ibrahimovich. That guy then undressed almost completely, and ran up on a (very) elevated stage and danced there for 10 minutes. One of the other guys bought me a drink (rum).

They later also asked (forced) me to play the game "otogi janken" with them. Janken is the Japanese rock-paper-scissors. Otogi means manliness. So this is "manly rock-paper-scissors". The goal is to try to win, and it is very manly to win because you have to do things you would not want to do unless you were very manly. Normally this means spending lots of money. This is common in funny TV-shows, where they gather male celebrities that have a "manly" image to defend, and then they go around to different places and do things like "who wants to pay for this meal for 20 at a super expensive restaurant?", and everyone has to say they want to pay. Since everyone wants to pay, they decide who gets to pay buy playing rock-paper-scissors. The winner then pays 500,000 yen or whatever the bill they rack up ends up being.

In my case, I am apparently super manly because I defeated everyone in the first round of rock-paper-scissors. Usually you have to do several rounds before things are decided when you play Japanese rock-paper-scissors with many players, but I was so strong it ended immediately. I then had to drink a glass of some strong alcohol that no one told me what it was. I also had to pay for all the drinks of all the girls at the counter. Luckily, it was so late that most people had left and it was actually quite cheap for me.