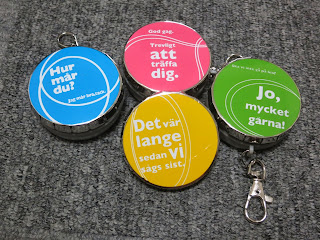 When I was out looking for Halloween stuff, I stumbled upon these portable ash-trays. Apart from having a very interesting locking/unlocking mechanism, they also have Swedish written on them. The Swedish does seem to be written by a non-native speaker, though... Two of them contain weird typos, and one of them sounds very unnatural though not actually wrong. They say:

"Ska vi inte gå på bio? Jo, mycket gärna!" (I would never reply with "mycket gärna" to a question like that.)
Posted by Jonas at 7:15 PM