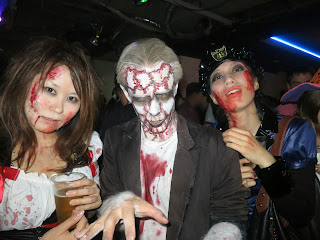 A friend of mine said that: "We are all going to a Halloween party. We are all going as zombies! We even bought latex for make-up effects. And I bought a Halloween costume that has a skirt that is so short I was super surprised. Also, there will be a foreigner doing a magic show at the party." The event was also located about two minutes by foot from my apartment.

Actually, she mainly wanted to ask me what kind of paint I had used last year and other make-up related questions, but with all that information... A party with a magic show. A foreigner who does magic. People going like zombies. In my back yard. There were just too many factors telling me the Japanese gods wanted me to go to that party, so I asked to have some time off from the magic bar and spent the early hours in a FIFO party.

FIFO here is not what I first think of when I see the abbreviation (which is a queue, similar to LIFO, a stack) but it stands for "Furtherment of International Friendship Organization". So there were quite a lot of foreigners there, and a lot of Japanese people that wanted to talk to foreigners (which is not that easy in Sapporo, since there are relatively few foreigners here).

My friends showed up an hour or so later than I did. I also ran into a Korean girl I know a little (we are Facebook friends, and we have met at some hanami (cherry blossom viewing) party and some Hokkaido University event). The magician also turned out to be someone I have met. Five years or so ago I met a guy called Johnny Samoa (from New Zealand) at a hanami event, and since I had just started practicing magic at that time he mentioned that he too does magic and we talked a bit about magic. We have not met since then, but he was the magician at this FIFO party, and he still remembered me.

The magic show was fairly short, but had some interesting magic. First there was the "kiss trick" currently quite popular on YouTube. A spectator selects a card and signs it. It is folded and the spectator keeps this card in her mouth. The magician then takes another card and signs that. This is folded and put in the magician's mouth. When the magician and the spectator exchange a kiss, the cards also change places. This is a nice trick, and I saw it performed in a magic bar in Fukuoka too (there, two spectators who came to the bar together kissed and exchanged cards they had in their mouths). 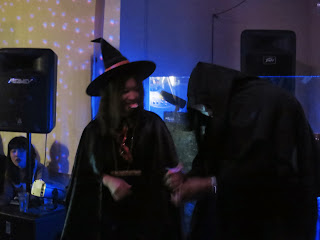 Then he had another spectator pick and sign another card. This card disappeared from the deck after having been returned there. The spectator then took out a key-ring from a paper bag that had been standing on a table since before the show started. The key-ring had a plastic thing with what seemed to be a folded card inside the (un-openable) plastic. The magician by some magic made the card inside the plastic block disappear (or come out) and now held a folded card in his hand that turned out to be the spectators signed card. 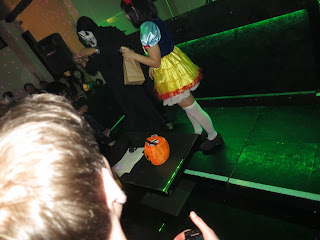 Then the magician had five spectators come up, and gave them each a card from the royal straight flush in spades. After explaining what a royal flush is, he returned the five cards to the deck and shuffled the cards. After some shuffling and flourishes, he produced the five cards in different ways again. 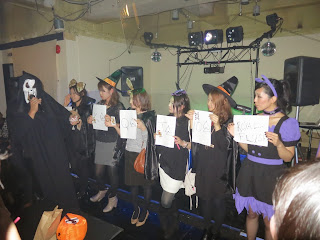 Finally, he did some "card from thin air" productions ("million cards"). The Japanese girls standing next to me seemed to have some trouble in understanding what magic was being done, so maybe he should have explained the goal of the tricks in Japanese too (he spoke mainly English), though I had no problems following what he wanted to show.

I met and spoke to quite a few interesting people, and I saw many nice costumes. All in all, a quite nice Halloween party.