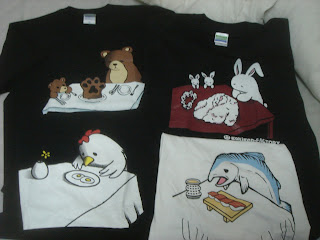 I bought some more t-shirts in Tokyo on my way home from Saitama. I already have t-shirts with pigs eating a Japanese pork dish, cows eating beef steak, and a hen eating eggs. I bought one more with the hen, since my old one is a yellow shirt and the black looks better. I also found a salmon eating salmon sushi, bears eating bear paws (a Japanese dish), and rabbits looking at a rabbit fur coat.

I also wanted to buy a t-shirt that said "aho gaijin" ("idiot foreigner") in Japanese, but they only came in the size "large as a tent". There was also a nice t-shirt that said "Starwars coffe" and had a picture of a storm trooper instead of the Starbucks woman, but again they only had tent sized shirts left.
Posted by Jonas at 8:14 PM