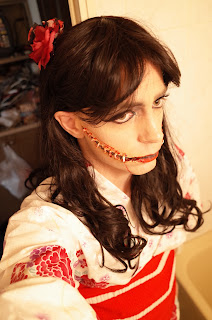 Last year I became the "kuchisake onna" (slit mouthed woman) for Halloween. I was not entirely happy with the result, but it was quite fun. I decided to try it again for O-Bon and the Bon-Odori costume competition. Since Bon-Odori is traditionally done in a yukata (summer kimono), I practiced getting in and out of womens' yukatas. It turns out yukatas for women are much more complicated to wear than yukatas for men, but with YouTube as your friend it is not that bad. 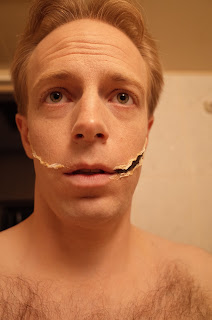 After having done zombie makeup a few times, I am getting reasonably good at doing blood and gore effects on my face. It is more difficult if you want most of your face to have a natural skin color, though. Normally it does not matter if the gory parts are not skin colored, since I just paint the rest of the face in the same color afterwards anyway.


Something else that turned out to be difficult was the eye makeup. The kuchisake onna is (according to the urban legends) a woman with strong flashy fashion sense, and would probably have strong eye makeup. Since I do not use makeup normally, trying to make this look good was difficult...


I also spent 20 minutes in front of YouTube trying to tie a female style obi knot. The instructions included things like "and now you should have about 60 centimeters of obi left, so use that to fasten the knot" etc. But since I am not as skinny as average Japanese girls, there was more like 5 cm left, which made it difficult to fix the knot. 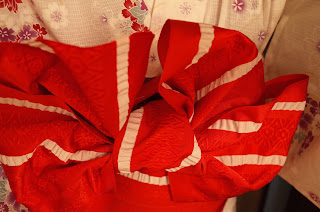 The end result was not great, but the new wig was cuter than the ghost wig I had last year so the result was slightly cuter than Halloween. One of the problems at Halloween was finding high heels in my size (impossible in Japan), so I remember having extreme foot pain. In a yukata you normally wear geta or sandals. There are no geta for women in my size either, but I have Japanese style unisex sandals that are fine for my feet. So that was nice. 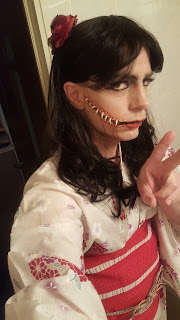 When I got to the Odori Koen park in the middle of Sapporo, I found several of my friends there. One guy I know who works at Bic Camera (and who sold me my new camera the day before) was there so I asked him to take some photos of me with the new camera. I also met the couple that I had udon with for lunch. They had an even better camera with them, and sent me many good photos later, from when I was dancing the Bon-Odori. 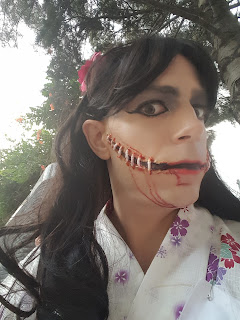 At last years O-Bon, I made a small girl cry in the park because my ghost costume was too scary. This year no one cried as far as I noticed, but one small boy took one look at me and then ran away. 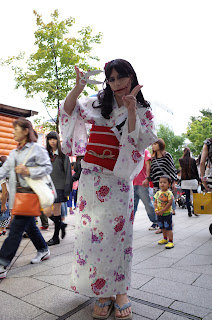