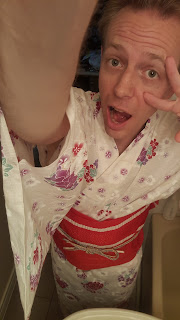 In preparation for the last day of the Bon-Odori, when there is the costume competition, I practiced wearing a yukata the way women wear them. This turned out to be much more complicated than the male style.


For men, you stick your arms into a bathrobe and tie a belt in a fairly simple knot. That is all. For women, you have to adjust the length of the yukata by complicated folding, tie several hidden ropes to keep things in place, and tie a gigantic obi (belt) into a complicated shape. And it is also very hot under all those layers of cloth...

I had to stand in front of YouTube and follow the instructions over and over until I got things down so I could get into a yukata quickly enough that I could make it on time to the costume competition the next day even after having lunch.

Since I had decided to go as the "kuchisake onna" urban legend (a ghost-like creature who has had her mouth slit up and kills or mutilates children with her scissors), I also had to practice girly eye-makeup. I did the same character for Halloween last year, but thought it would be nice to be the kuchisake onna in a yukata too.

I found a really cheap and pretty nice yukata in a recycle shop. They also had cheap wigs there. They did not have any obis, though. I went to a used kimono store and asked them about an obi that would go well with my white yukata and with the image of the kuchisake onna (who wears flamboyant red, normally). They remembered me from O-Bon last year, when I was there looking for something white to wear as a ghost. They said they saw me in my ghost costume on TV, and they gave me lots of stuff for free, haha.
Posted by Jonas at 6:50 PM