Every year there is a Bon-Odori dance in Sapporo from August 14 to 20, every evening in the big Odori Koen park in central Sapporo. People show up and dance the traditional Hokkai-Bon-Odori, which has a few simple moves repeated over and over and over for three hours. You can join and leave whenever you want, and everyone dances in a circle around a tower where people are playing the same song over and over and over on drums and flutes.


The last day of the Bon-Odori there is a costume competition. This is apparently a Hokkaido only thing, and people in the south do not have this custom, though O-Bon and Bon-Odori is celebrated all over Japan. I participated last year, as a ghost (O-Bon is the time when the spirits of the ancestors come visiting, like Halloween, so ghost would be appropriate).


This year I went as the kuchisake onna (the slit mouthed woman). I had lots of fun, and met some people who also participated last year. For the competition, you have to register in advance, and you get a big number to stick to both front and back. Then you dance all alone (one team at a time) in front of the judges. After passing the judges you join the main Bon-Odori circle and dance for one more hour or so together with people not in costume. Then there is an award ceremony where the winners get nice prizes. When this finishes, they tear down the Bon-Odori musician tower and remove all traces of the celebration from the park.


I have never won anything at the costume competition (though you do get one PET bottle of tea and a tissue box as a "participation prize") but I have always been very popular with the people that come to watch. Hundreds of people have asked me if they can take photos of me or together with me, and many more just snap photos without asking. Last year I was apparently even on TV, while waiting for a green light on my way to the park, haha.


The people I find impressive at the competition also almost never get any prizes, so apparently my view and the judges do not agree on what the competition is about, haha. I have fairly recently got to know a girl who lives in my neighborhood, and she said that her father has lots of photos of me. For instance from the Bon-Odori last year. She also sometimes mentions things like "My father saw you at Seven-11 last week" etc. I have no idea who her father is, though. 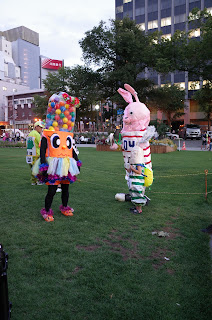 This year, she found me at the Bon-Odori and dragged her parents along with her and introduced us. So now I finally know what her father looks like, haha. He had already taken photos of me this year too.


When you register for the competition you have to write down things like where you are from, the average age of the team members, anything you had problems with or something you want to brag about in your costume. I wrote down that it was very difficult to get the yukata for women on, because of size problems and because the ways women and men wear yukatas are apparently completely different. The announcer who was commentating all the teams when you passed in front of the judges (and a few hundred people looking from the sides) said that from his point, I seemed to have got the girly look down pretty much perfectly.


My friend's mother also said that my dancing style was very girly too. I guess it was a compliment, but since I just danced the way I always do, this means that I normally dance like a girl even when dressed like myself... Which is probably not that great. But I learned Bon-Odori by looking at the other people dancing and just mimicking them, so since most of the participants that seemed to know what they were doing were women, I guess that just stuck. 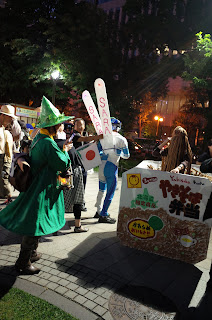 I did not win any prize this year either, but I had lots of fun. Now I just have to figure out something clever for next year. If I manage to extend my visa. 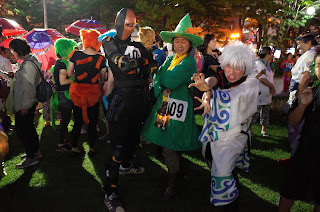