Chance meetings at the first day of 4 Bangai Festival 2015


Last weekend we had something called the "4 bangai festival". There are two days of street performances and other festival like things going on. Several friends of mine were performing, so I stopped by to watch them perform.


I saw the clown "Gucchi" do a stage performance for the first time. A few weeks ago, I saw him do smaller performances out in Sweden Hills. He was very good. Very funny. Very good at dealing with the people he had up on stage to help him out, and very good at making himself understood without talking.


The juggler Yu-ki who I also saw quite recently was in Sapporo again, doing all kinds of juggling. He is also very entertaining.

Since it was a festival, people were also carrying around a small portable shrine. The gods also need to have some fun. 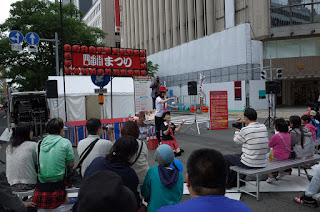 I also saw the juggling group Lily Blossom, and they were quite funny too.

I also kept running into people that I know. I met a Polish guy who is in the lab at my university where I used to work. I met a Swedish guy I went to university with back in Sweden, who is here on vacation now. I met at least 10 people I know from a bar where jugglers and street performers hang out. I met a guy I know from the store where I buy my cameras. I met a magician from Sendai (further south in Japan) who turned out to know who I am (the most surprising thing that day). I met a Sapporo magician who also stumbled upon a street performance magic show by chance. I met a girl who came to one of magic shows in Bottom Cafe. I met a woman from a kimono store who said: "Wow, you are even fatter than last year". Nice that she remembers me visiting the store, but a strange choice of greeting phrase... I saw a girl from the bondage circuit where I did some magic shows too. And maybe some other people that I don't remember now.