When work is not as pleasant as you could hope 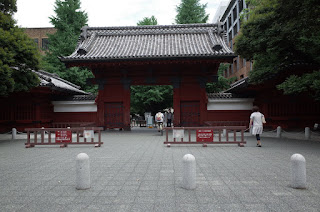 This week I got up and left my home at 6:30 in the morning to take an early flight to Tokyo. I was scheduled to attend a meeting at Tokyo University. It was in some mysterious building far away from all subway stations so I had asked for tickets for the evening before but the administrative office told me that meetings that do not start really early mean you should take a morning flight. Evening flights look like you just want to go to Tokyo and have fun, so I had to buy an expensive morning flight ticket (not that it is my money, but still) and get their in a sleep deprived zombie state. 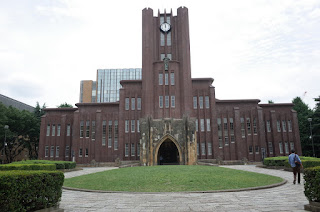 After arriving punctually to Haneda airport and asking the information there for the faster train changes to get to Tokyo University, and then using Google Maps and cell phone GPS I ended up reaching the meeting 10 minutes before we were about to start, so that went fine. During the meeting I noticed that the server back in Sapporo that I was supposed to use when presenting our system live was actually down. I got hold of one of my colleagues in Sapporo who confirmed that the problem was with the server (not just with my connection) but the only guy who can do something about server problems (because he does not let anyone else have such permissions) was away on a trip somewhere and could not be reached.

So I had to improvise a new presentation from scratch using old video clips, slides in English, and other random things related to our system that happened to be available on my laptop or on the machines in Sapporo that were still up. But the end result was not that bad. I was a little surprised that the Tokyo University does not allow guests to use their Internet (for the same reasons our server guy does not let anyone else access our servers, I guess), so I had to use tethering through my cell phone to download the things I needed for my presentation too.

Other people had worse problems. One guy never reached the meeting because he was coming here using the Shinkansen super express trains from Kyoto but someone had poured oil on the Shinkansen tracks and set them on fire, which stopped all the train traffic for many hours (and some people died). 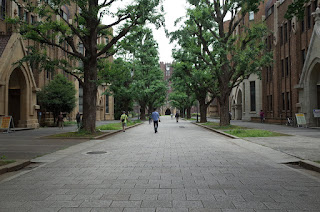 I had some troubles when travelling too. In the early morning security check at the Sapporo airport, the X-ray staff asked me: "Do you have any more lighter on you?" Since I do not smoke, I was surprised that they thought I had even one. It turned out that I had a fork, a nail, and a lighter bundled up in my bag. I use the lighter to sterilize the nail before hammering it into my nose (using the fork). I did not expect there to be a need to hammer nails into my nose in Tokyo and had not thought to bring this kit, but since I got up too early I had apparently ended up bringing that stuff too. They told me it was OK to have up to 4 lighters with me, and the metal fork was OK too, so no problems.

On the way back, I was stopped at the security in Haneda airport too. They asked if the could X-ray my bag one more time. I said sure, of course (is "no" actually an option?). They then came and asked me if I had a nail in my bag, which I did, and asked me to take it out. They then asked me if they could X-ray the nail again. I said sure. So they X-rayed the nail and the fork and the lighter again. Then they asked me if they could measure the length of the nail. I had no objections, so they produced a tape measure and measured the nail a few times. They then informed that nails up to 6 cm are OK but this nail was 2 mm too long. So I would have to go and check the nail in as checked luggage. I was tempted to do that to see if it would arrive, considering this nail was very small (much smaller than the baggage tag, for example) but since I did not have much time before the last flight of the evening left, I said they could throw the nail away. I buy them in huge packs for almost nothing anyway.

So I made my return flight and got back to my house slightly before midnight. But with one less nail. This made me realize that you can actually jam the fork handle up your nose instead, though, so all in all some pretty useful information came out of this.
Posted by Jonas at 9:32 PM