"Take off your pants" in the middle of the street 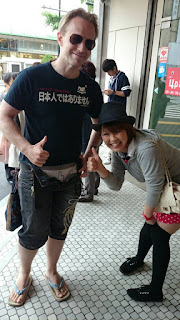 On Saturday I ran into the girl who told me that Amazon sells Japanese Facebook style joke underwear. She usually asks me what underwear I am wearing and tells me to show her. This day was no exception, so I ended up getting photographed in front of one of our biggest department stores.

Since some people I know started taking photos, random people I have never seen before, also not known to my friends, came up and figured that since so many people are taking photos, something worth photographing must be going on so they also came over with their cameras...which got a bit weird.
Posted by Jonas at 8:37 PM