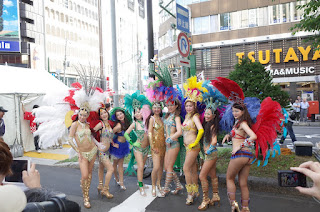 On Sunday I woke up late since I had been in our magic bar until past 6 in the morning. When I woke up my phone had several messages for me. One of them said: "Do you want to have lunch wearing a yukata today?" 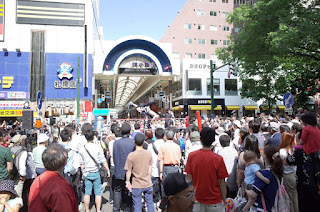 Since it was already past lunch time I said that I had planned to go to the 4 Bangai Festival and see some friends perform, but that I might as well go there in yukata. My friend said that she would also go in a yukata then.


When we watched one of my friends performing, there was a professional cameraman taking photos. He might have been working for the festival, or perhaps a newspaper. He took photos of the performance, but also of the audience. He had a huge camera pointing at me and my friend for a long time. Perhaps because we were in yukatas and almost no one else was. Anyway, I kept doing "ohh!" and "wow!" faces, and my friend later said she also noticed him and did the same, so he should have got a few good photos. 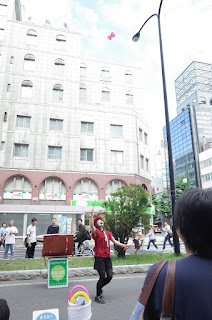 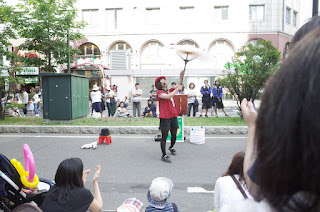 My friend wanted to go see the body builder exhibition, so I watched some of the juggling by myself while she looked at almost naked men. She came back and said that that was great. 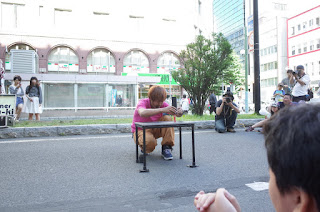 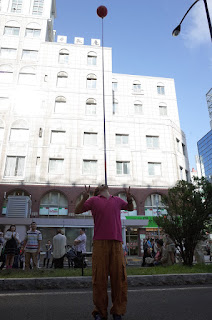 My friend also noticed that there was a "Samba dancing" point in the program, so we went over to watch that too. My friend also dances and the first time we met she was part of a dance performance at an event where I was doing a magic show. 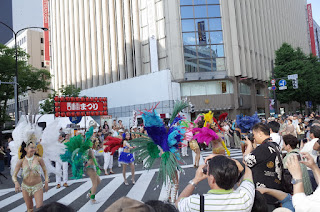 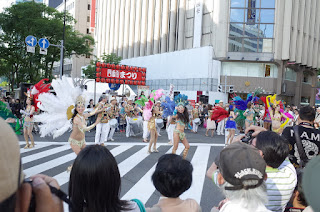 The samba group was great. They had very colorful costumes. My friend spoke to one of them (who she knew, I think) afterwards, and they said that they would walk home dressed like this, since there was no place nearby where they could change clothes...