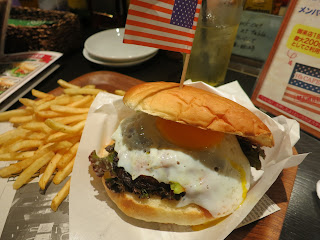 On Thursday I finally got around to going back to a hamburger place that my Greek friend told me about. We went there three times together while he was still in Sapporo and they have very nice hamburgers so I thought I should go there alone too. I never got around to it though, even though it is only about a ten minutes walk from my home.

This time I ordered a "The Mexican Burger", which comes with Jalapenos, egg, avocado, and tomato. It was good.

The place is called "H's Cafe", which is a somewhat strange name in several ways. It is not a cafe, and they do not have coffee, so the "cafe" part is a bit weird. When talking to someone who knows someone who works at H's cafe, there was a discussion on how you would read the "H's" part. A lone "h" in Japan is often read "ecchi" (a Japanese version of the English pronunciation of "h") and then often means obscene, pornographic, sexy, or things along those lines. Since H's Cafe is an "American bar", it might make sense to read it in English, something like "eich's bar", I though.

It turns out that according to people that work in H's Cafe, the proper way to read it is like you would read "his cafe" in English. Probably because the owner is named something that starts with "H", probably "Hi"-something. Perhaps "Hiroshi" or some other common Japanese name. So it is a shortened form of "Hiroshi's Cafe" (or whatever the name may be).
Posted by Jonas at 1:15 PM