On Sunday I went to our neighboring city of Otaru with one of my magic bar colleagues. There was the Ushio Matsuri ("Tide festival") with lots of festival food and some fireworks. 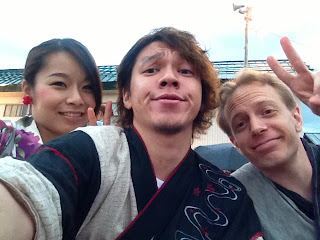 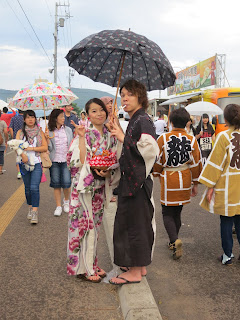 My friend does not have a yukata, despite being Japanese, so he borrowed one of mine. I also wore a yuakata, of course (another Japanese friend tells me that "you have to wear a yukata when you go to festivals"), and my friend's girlfriend also came along, wearing one of her yukatas.


At the festival, I passed a foreigner and it sounded like he spoke Swedish to the Japanese woman he was there with. I asked him in Swedish why he was in Japan, and it turned out he has a Japanese girlfriend and they were in Japan to visit her family. She also spoke Swedish to me, and her Swedish was very good. Meeting Swedish people in Hokkaido is not very common.

It turned out to be raining on and off, which was a bid sad. There was a big fireworks event at the end of the festival, but 5 minutes before it started the rain picked up and we became completely drenched. I had brought my new umbrella but it was too small for all three of us to fit. We left in a hurry after only ten minutes of fireworks. By the time the fireworks were finishing, the rain stopped. By then we were already at the train station, though. 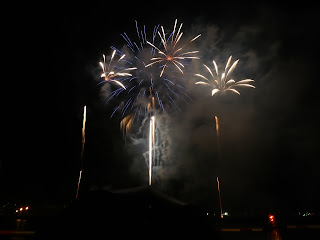 We had a quick stop at Don Quixote (a chain of stores all over Japan that are open very late and sell weird things cheaply) and bought some clothes for my friend's girlfriend. She changed into the dry clothes in the store while the rest of us rode the train back to Sapporo still completely drenched.

Back in Sapporo, we had a late meal at Bikkuri Donkey ("The surprised donkey"), a chain of restaurants serving Japanese hamburger patties cheaply.