Two days in a row at Ropossa 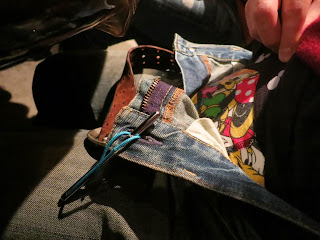 On Tuesday I tried to go to Ropossa to talk to some friends of mine, but since Ropossa is very popular it was full and I ended up eating somewhere else. On Wednesday I tried again, and it was fine. I got the only empty seat, more or less.

Lots of people kept telling me that my t-shirt "looks completely normal", and they were unhappy about that. I was wearing a shirt with kanji, cherry blossom embroidery, and a glow-in-the-dark earth, which according to some people does not qualify as "normal".

A man I had never met before came up to me and started speaking (drunken) English to me. He asked where I was from, what I do for a living etc. He was surprisingly good at English. He became more and more exciting with every question, though. It turns out his father has been to Sweden more than ten times, so hearing that I am from Sweden made him excited. Then it turned out that his father used to work at Hokkaido University, where I work, which made him even more excited. And it kept on like that.

The "mama" of Ropossa also became excited and said: "Jonas can actually speak English?! This is the first time I ever hear him say anything in English!" Which confused the Japanese man talking to me, but was generally thought to be quite funny.

On Thursday, a magician friend e-mailed me and said: "I am thinking of going to Ropossa today. Do you want to go together?" So I ended up at Ropossa again. This time, I made sure I wore a "weird" t-shirt, so as not to get lots of complaints again. I picked "ある意味神".

My friend arrived before me, since I could not get away from the university work until after eight, and when I arrived he had a metal pin stuck in his jeans button hole. It is a puzzle kind of thing, and when he left a few hours later he had still not figured out how to get it off, so he went to work with that thing dangling from his jeans.

Ropossa is always nice, and I ran into many nice customers both times, including magician Akkey who I have not seen in a while.
Posted by Jonas at 2:03 PM