Who walks around with 40 raw eggs? 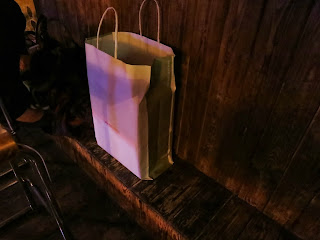 Yesterday I went out to eat and an hour or so later than me, a young woman also showed up and ended up sitting next to me at the counter. She was carrying around a large bag which contained a paper carton filled with 40 raw eggs.

I asked her why she was carrying around 40 raw eggs and she said someone had given them to her...

After some more discussion, it turned out that she had won them as a prize in a bingo game, presumably at an "End of the year"-party or something similar. She was dressed up in very nice clothes too.

She tried to give away lots of raw eggs to the other people in the restaurant, but since she did not have anything to carry them in, everyone declined. Putting a couple of raw eggs in your pocket did not seem like a great idea.

The eggs also had an expiration date stamped on the carton. December 11. So she has 20 days to finish off the 40 eggs. She said she lives alone, so she will have to eat two eggs per day every day for three weeks, I guess. This reminded me of the time I saw people win 40 liters of bottled water (lots of PET-bottles) in a bingo game here in Sapporo. They were less than thrilled, since they were flying back to Tokyo the next day, haha.

When I wrote about this egg incident on Facebook, a lot of people chimed in with egg themed puns. This is probably my most commented Facebook post so far (not the most liked, though, which was probably my first ever zombie photo). Since I do not have that much to blog about recently (because I am too diligent and always working, of course), I decided to include that stuff here too. I removed some non-pun comments, fixed some spelling errors, and reordered things to make make sense of the unthreaded Facebook comments, so it is not exactly the original exchange.

My original post: Today I ended up eating dinner sitting next to a woman who came into the bar carrying 40 raw eggs in a (big) bag. I asked why she was walking around with 40 eggs and she said that she had been given these today. Also, the expiration date is about 20 days from now, so she (who lives alone) will have to eat two eggs per day every day for three weeks now to finish them all  Strange country.

Daniel Westin:  Would you say they are a bit eggcentric?
Me: Yes, eggsactly!

Shawn Knzw [Since you are a magician,] Why don't ya change into that 40 eggs to Chicken Yocchan!
Me: 40 chickens running around in a bar is not good for business, so the staff would have been angry, probably

Jake Edge She didn't give you any of her eggs?
Me: She tried giving raw eggs to several people, but everyone declined because it is difficult to get raw eggs home without breaking them if you for instance put them in your pocket.
Jake Edge But you're a magician, Jonas! You of all people could pull it off.
Me: You might be right, but since I am so humble, I also do not want to brag about it in front of all the other people who could not pull it off.

Radoslaw Komuda Strange?: 2 eggs per day x 20 days = 40 eggs. Makes peggfect sense to me.
Me: That it makes sense to you is not a very strong argument against this being a strange thing to happen. Despite your eggspert calculations.

Radoslaw Komuda I eggree that the whole situation might have been strange but since you've made the comment just after presenting her calculations - you just can't eggspect that everybody wil miss that chance for a funny yolk.
Me: Thank you for eggsplaining. Glad we finally eggree.