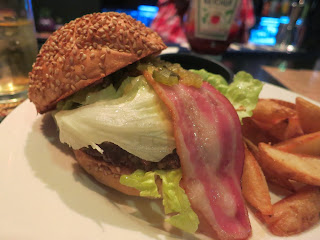 At the bondage event I did a magic show at last week, I was given the business card of a woman who on one side had a picture of herself in fetish gear and on the other side had a normal looking hamburger restaurant business card. I decided to drop by there and see if their hamburgers were good and if they were all dressed up in fetish gear.

The hamburgers were good, but everyone was disappointingly normally dressed. The woman I had met was not working the night I went there, but the other two recognized me from seeing a zombie picture of me on Facebook.
Posted by Jonas at 5:33 PM