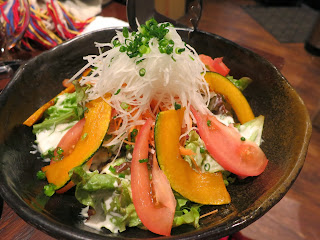 Christmas is the time for having expensive dinner with your girlfriend in Japan. Preferably Western style food. I did not have anyone to hang out with on Christmas (my friends either have girlfriends that they are expected to have romantic dates with, or they work evenings and nights (or both)), but as luck would have it one of my friends had more or less the same predicament. She even managed to find a restaurant with seats for us (the first 4 that I tried and the first 5 that she tried were already fully booked).

We ended up in a nice restaurant serving Japanese food, and as their specialty or gimmick they also served vegetable cocktails. We tried potato cocktail (running a potato through a mixer, adding alcohol and milk), sweet potato cocktail, pumpkin cocktail, and something else along those lines. It was a bit like drinking melted ice cream. My friend felt that one was enough (when she had her second one) and then switched to Japanese sake.


The food was great. She had set us up with the "whatever the staff recommends" course. This is good because she is hopelessly indecisive, so the less decisions there are to make about what to order the better. We got some fish stew type starter, pumpkin salad, roasted chicken (Japanese Christmas food), shabu-shabu, shell fish to grill ourselves, sushi, cake and ice cream. It was almost too much food to eat, and I am still not hungry (almost 24 hours later). We also had three hours of unlimited drinking, including the potato cocktails that were probably also close to being food.


While grilling shellfish, one of the sea snails exploded and sent boiling hot sea snail liquids mixed with boiling alcohol all over my arm, jacket, and trousers. This kind of exciting things tend to happen when my friend is around, though it is never her fault. This time, she also did almost no crazy things, though she did use her chopsticks to fish out things from her drinks, which is a bit unconventional. 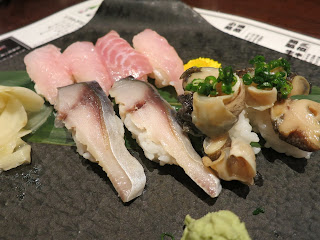 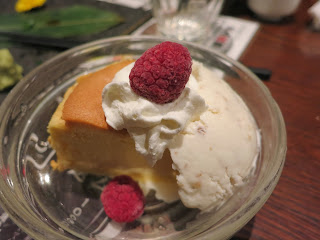 Not only did my friend find a restaurant, she also brought me a Christmas present (I did not bring one for her...). This was a set of candy for kids, in a very cute metal box.