Every year since four years or so ago, there is an event called the "Hokkaido Magic Convention" held here in Sapporo. This year the magician Dr. Leon was invited as one of the guest performers, and since I had never seen him live I decided to go and watch this years convention. 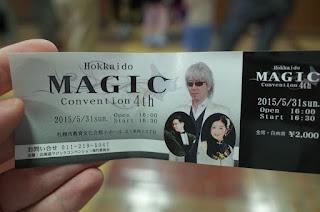 There were two other guest performers, both who looked nothing at all like the photos on the event posters and tickets, haha. They were pretty funny when performing, though. Dr. Leon was the most entertaining, though, and it was interesting to see what kind of magic he had chosen to do on the very large stage they performed on. The magic I have seen him do on TV or YouTube has been mainly close up magic, so I did not know what to expect when he performed in front of hundreds of people.

He did some card effects that work well from stage, having two spectators on stage pick ten cards each and then making three cards disappear from one spectator's pocket and end up in the other spectator's pocket and the "tossed out deck" where a few spectators all peek at cards in a deck of cards they toss around between themselves in the audience and he then names their cards. During the tossed out deck, the spectators were asked to turn of a blinking light they had if he named their card. One light seemed to never go off, so Dr Leon himself was very surprised. It turned out this spectator did not know that the Japanese word クラブ ("kurabu") refers to "clubs" (クラブ is one word for this, but many people call that mark 三つ葉 ("mitsuba", three leaves). He also did two versions of having metal chains pass through his body, he produced a snow storm, and produced a bowling ball, and more.


There was also a competition during the convention. Five contestants did about 10 minutes of magic each, and a group of 6 professional magicians then awarded one of them the status of best magician of the Hokkaido convention.

The first guy did magic with ropes and silks. I liked him a lot. He was (or at least seemed) very relaxed and did magic with a good tempo so you never got bored. He did not do anything particularly inventive, but he performed well and was entertaining.

The second guy did lots of difficult slight of hand magic, producing billiard balls, cards, and flowers. He did some very difficult stuff, and did most of it very well. He was not that entertaining, though.

The next contestant was a 60 year old woman who did the Cups and Balls with huge rice bowls. She did it fairly well, but it was a bit slow paced for my taste.

The second to last magician did lots of different magic. He came out and produced a dove, then produced a bunch of different face masks. He then changed the color of his suit, and followed that with some billiard ball magic. He kept doing trick after trick and did most of them well. Towards the end, he flashed quite a lot when producing bigger objects, though. To me, apart from the very obvious flashes, the biggest problem was that there was no connection between the tricks. He produced a dove, put it on a peg, and then ignored it for the rest of the show. He changed the color of his suit, but for no apparent reason, etc. The theme came over as "I bought 17 cool magic tricks and now I am going to show them all to you in a random order".

The last contestant turned out to be a guy I know a little. He has only done magic for 10 months, they said. He has done juggling and balloon art professionally for years, though, so he is an experienced entertainer. He did some very nice magic with a very entertaining presentation. It was nice to see someone from the juggling world produce large amounts of playing cards. The attention to detail in how the cards appear an the balance of the card fans etc. was impressive. He had the best presentation by far, and the magic was interesting too. He deservedly won.