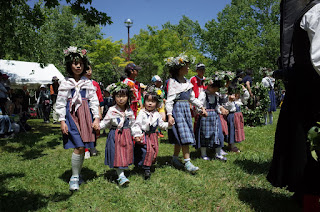 Outside Sapporo there is place called Sweden Hills, and they celebrate some Swedish holidays there. Usually not on the actual day of the holiday, but still. 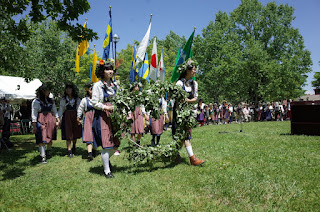 One of the things they celebrate is Swedish midsummer. This is one of the biggest events during the year in Sweden (possibly second after Christmas, which is number one). Usually you go to a nearby park where there is a May Pole, sit on a blanked and have a picknick, dance around the May pole, and get drunk. This is if the weather is good. If the weather is bad, which is common, you do not do much except complain about the weather and get drunk.


Swedish midsummer also usually means eating strawberries. Other things that are midsummer food are fresh potatoes (on a good/warm year the first potatoes become available around midsummer in Sweden) and pickle herring. 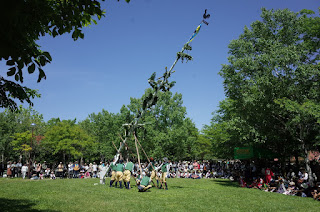 People dancing traditional midsummer dances around the May pole often wear wreaths of flowers on their heads. The dancing is often accompanied by live music from folk music groups.


At Sweden Hills they have people playing Swedish midsummer songs, and they are very good. They also ask some folk dancing group from Sapporo to come and lead the dancing around the May pole. Many people wear Swedish traditional dresses. As I lived in Stockholm, I only know one person in Sweden who owns such clothes. To me it is always a bit weird to see 70 people, all Japanese, wearing such clothes. I had never seen more than three people in such clothes at the same time before I came to Japan.

The dancing around the May pole is fairly Swedish, but they use mainly songs and dances that I never hear when I was a kid (which is when you attend the dancing in Sweden). They also never do the most popular dances, like the one with the frogs. This year, there were lots of Swedish exchange students visiting the midsummer festival, and after the dancing was over, they went over to the musicians and asked them if they could play the frog song. Then they danced this dance too, before leaving. It is not really midsummer without that song, and luckily the musicians knew the tune. 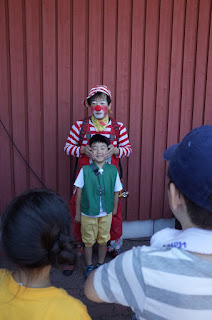 There was also a clown entertaining people at the festival. It turned out to be a guy I know. It was the first time I saw him perform. He was really good, of course. I was impressed by how he can communicate without using any words at all. I have a hard time communicating even when using words, haha.

There was also food available. There was something called a "Scandinavian plate". This was advertised as Swedish midsummer food, and lots of the food you got was kind of Swedish, and some of it was midsummer food. There was bread and cheese, which is common in Sweden. The bread was not particularly Swedish, but at least it was not sweet bread like most Japanese bread. There was a potato, and at midsummer we eat lots of potatoes in Sweden. This potato did not taste like Swedish potato types, and at midsummer you are normally supposed to try to get the "fresh" potatoes (the first potatoes of the year), which at this time of the year are really really tiny in Sweden (like grapes). There was also ham, which is common in Sweden but which is pretty strongly connected with Christmas food. There was also pickled herring, which is midsummer food (though we have it at other holidays too), and which was excellent. All the food was good, but apart from the herring it was not really something I would expect to eat at midsummer in Sweden.

I also bought an extra, very big, container with only pickled herring. The herring turned out to be excellent and to taste like Swedish pickled herring. I was told that someone living in Sweden Hills had made all of this herring herself. Impressive.

I also bought the "recommended food" that a young girl recommended me. It was a Japanese crepe with maple syrup, soy milk based whipped cream, and bananas. Not Swedish, but pretty good.
Posted by Jonas at 5:39 PM