Getting flowers from beautiful women 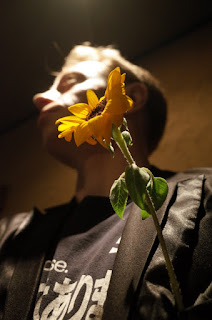 I rushed home early from seeing all the fun things at the Hokkaido Shrine Festival, because I had promised a friend to do a magic show at the after party of the wedding of two of his friends.

When I got there, I was told that they wanted my performance to be the last thing at the party and that I could just join the party to pass the one and a half hour or so until then. I knew a few people at the party but most people I had never met before (on account of only having met the bride and groom once). People kept asking me if I was from the bride's side or the groom's side, which was a bit awkward since I did not know either, haha.

People also kept telling me that there had been a magician doing a magic show at the previous party they had all just come from... Great. No one had told me about that, haha. But when I did my magic show, everyone laughed at the right places, and afterwards around 20 people came up to me and asked for my business card (which I don't normally hand out when performing at weddings, but am happy to hand out if people ask for them).

When I left, I got a flower from the bride because she liked the show. The next day, I ran into a woman who had also attended the party at the Shrine Festival. She looked very different in a festival outfit (yukata, Japanese hairdo) compared to her wedding outfit (fancy dress, Western hairdo), but she recognized me and said: "Ah, Jonas. Tettere!" Tettere is from a magic trick I do a lot recently.

Last year I did a magic show at the Sapporo Sheraton hotel, and the next day I ran into the bride and groom at the Shrine Festival too. They also looked very different in casual clothes compared to the wedding dress and tuxedo I had seen them in before, but they also recognized me. Not so many blond people in this city.
Posted by Jonas at 6:38 PM