Random meetings and more food at the Sapporo festival 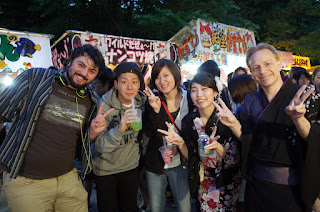 Day two of the Hokkaido Shrine Festival I had to work (since it was a Monday) but I managed to leave work before the festival closes (22:00 or so) so I decided to have dinner at the food stalls. The park is really close to my home, so that is a convenient place to eat. When I was looking at some croissant taiyaki waffles, a girl behind me said: "Ah, Jonas". It was a friend of a friend who I have met at many barbecue parties. She was there with her French boyfriend, who happens to share the same (rare) last name as the French guy in my lab.


We took a photo together, and when they had disappeared another girl behind me said: "Ah, Jonas". She was from the wedding party I had performed magic at the day before. I also met some people that I know from our magic bar.