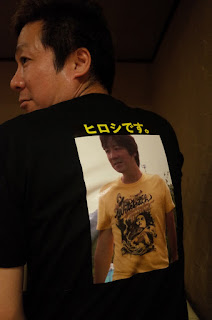 One of my friends is called Hiroshi. It was his birthday a few days ago. Since he seems to eat nothing but soup curry and Japanese curry, I gave him a t-shirt that says: "I love curry" (sold by the same company that makes the cannibal animal t-shirts I wear).

Another friend gave him a shirt with a photo of soup curry that also said "I love curry". It also had a photo of our friend on the back, with the text "I am Hiroshi", which apparently is something some Japanese comedian used as his catch phrase some time.
Posted by Jonas at 5:34 PM