June 14 to 16 every year has the "Sapporo Festival" or the "Hokkaido Shrine Festival" as it is also called. During these three days there are lots of stalls selling festival food both at the Hokkaido Shrine and in the big Nakajima Koen park.


There are also religious things going on. Processions of temple or shrine related people parade from one shrine to another while playing flutes and drums. They also carry or drag around "omikoshi", vehicles for the gods. This is one time during the year when the gods can thus visit other gods or get to see the town, not just stay in their shrine.


There are also other forms of entertainment. There is usually a monkey show at the temple, which is very entertaining. In the park there is a motorcycle show (very impressive), a variety show where people do weird things, a few "haunted house" style places, jumping castles for kids, dart throwing, cork gun shooting, etc. 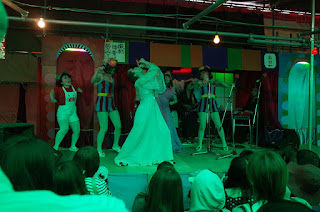