Every year there is a "Swedish fair" from the chocolate (and cookie) maker Royce. The main Royce factory is located just outside Sweden Hills, a place where they have lots of cultural exchange with a small place in northern Sweden. Every year they make some cookies and other things that are supposedly kind of Swedish. Most of these are not very Swedish, but they are usually pretty good.

This year they had five different "Swedish" things for sale. One was vodka filled chocolate. This sounds like something you would find in Sweden, since both vodka and chocolate are common and popular in Sweden. I have never seen vodka chocolate in Sweden, though.

Then there were some hazelnut cookies. This sounds like something we have in Sweden, and I am sure you can find people who make cookies with hazelnuts in them. I would not call it something particularly Swedish or particularly common in Sweden, though.

Then there was something called "lingontårta". This is something that sounds very Swedish, but "tårta" implies a soft and layered cake in Swedish. These things are more like muffins. So the word to describe them is wrong.

Then there are the "kokosbollar". This word is used for a very common sweet in Swedish. The product looks very much like actual kokosbollar. If you take a bite, it turns out to be completely different though, haha. They sell something that is a ball shaped cookie (crunchy). Actual kokosbollar are made by mixing butter, sugar, oatmeal, and kakao powder, so they are very soft.

Finally, the had something called "ostkaka", which translates as "cheese cake". Swedish cheese cake is kind of strange and is perhaps better described as pudding. It is very soft. These things on sale are cookies. Not soft.

All the products are fine cookies and chocolate, but none of them are particularly Swedish.

I took it upon myself to make some kokosbollar at home and give my friends to try. They agreed that what was sold and what I had made were completely different things. 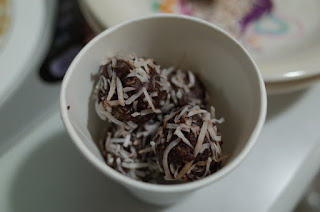 I got some home made pickles and home made curry in return, which were extremely good! 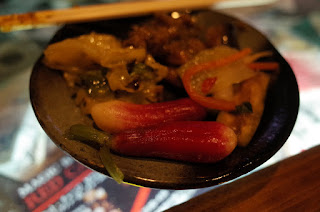