As a contrast to the weird and disgusting food from many of the blog posts lately, here is one with the fairly normal food we had yesterday. I went to an izakaya (which roughly translates into a Japanese style bar) with my Swedish and Greek colleagues. 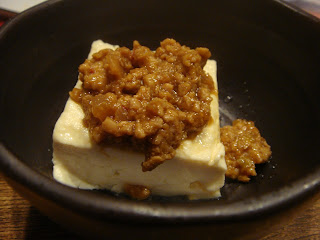 We ordered "nomihoudai" (two hours of "all you can drink", i.e. a fixed price no matter how much you manage drink). That included the tofu with minced meat thingy above. This was pretty good. 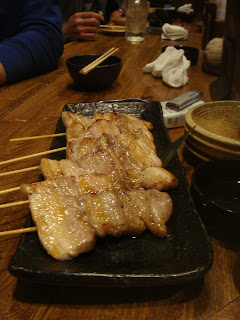 The place we went to was (at least according to my colleagues) famous for pork skewers, so we ordered a bunch of that. They were very good. 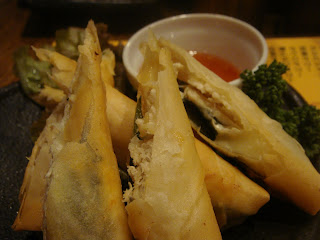 Next thing to show up was spring rolls with chicken and Camembert cheese. Also good. 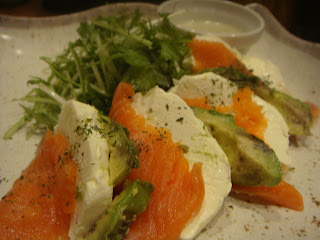 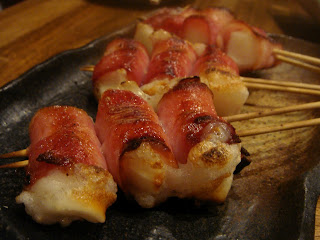 This is a very Japanese dish, mochi-bacon. Mochi means "rice cakes". Basically you smash rice with a wooden club until it is a sticky mass and then make small cakes out of it. It is very chewy/sticky/hard to tear with your teeth, and every year some old people die from getting mochi stuck in their throats and suffocating. Mochi wrapped in bacon and grilled is very nice. 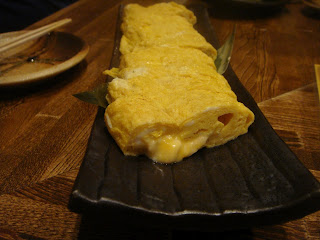 This is some kind of egg and cheese combination that my colleagues ordered since they liked it the last time they were there. It was good. 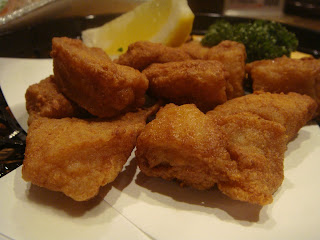 This is "deep fried pork fat". We discussed this before ordering it and came to the conclusion that while it is probably not the healthiest food in the world, pork fat (with small pieces of meat stuck to them) is good and deep frying it should make it great. It was good, but since I need to lose 10 kg of body weight and my colleagues are even worse off, perhaps not the smartest choice :-) 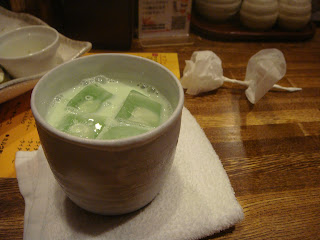 My colleagues kept drinking beers (though I think they only had 8 or so per person), but since I do not like beer I tried other things. This is "matcha milk", tea ceremony green tea (matcha, not to be confused with ryokucha, normal green tea) liqueur mixed with milk. And served in a traditional looking cup instead of a glass. Not that great, but kind of Japanese at least. 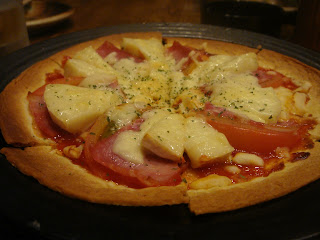 Camembert cheese pizza. The bread part is about as thick as a paper and tastes about the same (the standard Japanese style pizza), but the pizza as a whole was good. 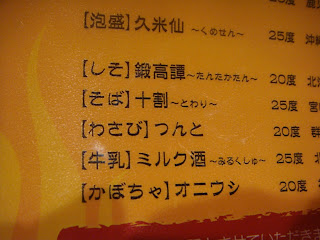 On the list of alcohols, there were groups like "potato based", "rice based", "wheat based", and then "others". Under others there were things like "wasabi based" and "milk based". The milk based one was apparently a Hokkaido speciality so I asked what it was like. The bartender said it did not taste much of milk at all (which is not that helpful, considering there are plenty of things that do not taste of milk). 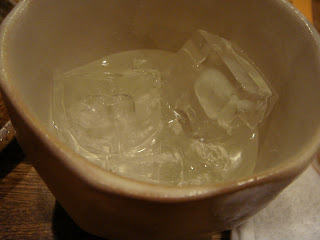 He gave me a little milk based sake, and it looked and tasted exactly like normal Japanese sake.

Next to me at the counter there were two Japanese women. After two hours they started trying to speak to my Greek colleague (the one farthest away from them). He does not speak much Japanese, so they were trying to communicate in English, which worked so-so. When he introduced me and they did not catch my name (Jonas does not sound like a Japanese word or name so it is apparently hard for Japanese people to figure out what you are saying though they have no problem saying it if you explain the details of the name), I did my normal schtick with explaining it as: "Yoo-nasu, written with the yoo from Hokuyou Ginko [a large bank here] and nasu from the vegetable [nasu is the Japanese word for eggplant]" they thought it was hysterical. And they thought it was funny that I could speak Japanese very well. I told them that I can only do conversations on trivial topics since I never studied Japanese and only learned it by talking to my friends about silly tings, they thought that was even funnier. Then they went home.

My Greek colleague entertained us by asking if my Swedish colleague used to "download the smoke into his lungs" when he was smoking cigars. Then he kept using that expression when talking about inhaling smoke the rest of the evening. He also told that in Greek the expression for pipe smoking also means oral sex. I told him that the Swedish word for pipe (which is the same as the Greek word) is only one letter duplication away from being the word for having sex, so it was "close, but no cigar". And my colleagues were almost dying with laughter. Drunk people are easy to entertain :-)
Posted by Jonas at 3:45 PM