Osaka trip: statues in the park, cookies in the hotel room

My second morning in Osaka I spent in a park. I had plans for meeting a magician friend from Sappoor in the afternoon, but no plans until then.


When I met my friend the day before, I gave her a set of Swedish cookies. She did not have room for them in her bag, so she asked me to carry them for her while we were sightseeing. Of course, we both forgot about them later and I found them still in my bag when I was looking through my bag in the hotel room... So I figured since I was still in Osaka I could hand over the cookies (again) during my friends lunch break. 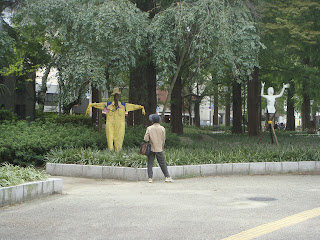 She described where she works and I tried to find my way over there. It turned out to be really easy to go there, so I was standing in the subway station pondering how to kill 2 hours or so. The station staff thought that I was a foreigner and completely lost (mostly true) and asked me if I needed help finding my way through the subway system. I said no really, but was there anything interesting to see or do near where I was going? No, it is an office area, with nothing but offices. Maybe a cafe if I was lucky, I was told. I chatted with the man from the subway for about 10 minutes about things to see, and decided to go more or less to the office area anyway.

I spent an hour or so watching people play with their dogs in the park, and homeless people relaxing in the sun. I liked the fact that the homeless people were spending the morning reading the newspaper. Of my friends in Sapporo (who are mainly not homeless), only one reads the paper.
I then met up with my friend and we had lunch at a French cafe called "Le 日本食堂", which was nice.