In Japan, or at least here in Sapporo, people like to use the English expression "let's". They use it in a strange way, though. Usually it is "let's [some noun not describing an action]", such as "Let's Hokudai Festival!" or "Let's English conversation!". 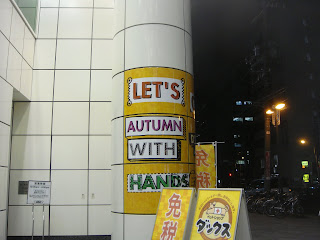 Today I went to the large and famous Sapporo branch of the Tokyu Hands stores. Their current slogan is apparently: "Let's autumn with hands".