There is a restaurant on the outskirts of Sapporo that serves (or at least used to serve, I have not been there in years) strange food. A Japanese friend of mine figured that since I am weird, we should go there and eat weird food together. I invited the guy who recommended the grasshopper and bee larvae restaurant to me to come along too. Since he has a car and the restaurant is hard to get to, that was a good idea.

We had lots of weird food there, so there will be more reports from this trip later. Here is a snake fillet though (center stage, there are also worms and a frog pictured): 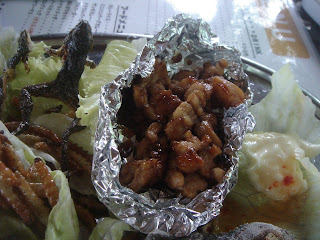 The snake fillet was fairly tasteless. No bad taste at all, but not much taste of anything else either. The meat was very hard and chewy. So snake was like eating normal meat that someone failed to prepare properly and thus turned out to be really really hard. Other than that, not really any different from "normal" meat.

Taste: OK (not much taste at all)
Texture: very hard/chewy
Looks: OK
Overall impression: not disgusting, but not pleasurable; might as well avoid
Posted by Jonas at 5:36 PM