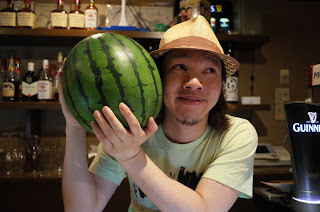 One guy who showed up in our magic bar was supposed to meet two of his friends there, but they left before he got to the bar because they thought he was too late. He had bought a water melon to share, to be nice since he was late. For some reason, water melons are super expensive in Japan (in Sweden, where it is much more difficult to grow things because it is cold and dark, they are much cheaper), so it was a nice gesture, especially since he was late because he was not allowed to leave work.

Anyway, he left the water melon in our bar and told us to eat it. It was very good.
Posted by Jonas at 10:31 AM