Police parked in front of my building 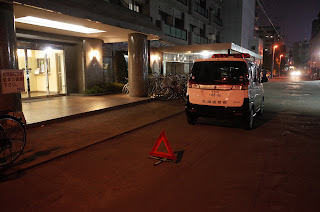 People tell me I live in a "bad neighborhood" (by Japanese standards), and I do see the police quite often. One time some police officers and an ambulance crew came out from the apartment two or three doors down from mine in the corridor carrying a stretcher with a (full) body bag. They asked if I wanted to cram into the elevator with them, but it was pretty packed already so I said I would take the stairs instead.

One time, some police officers asked me to open the (locked) entrance door and let them in when I was coming home, and then they ran very fast out of the elevator towards some apartment down the hall on a different floor than mine.

This time, there was a patrol car parked in front of the building, but nothing out of the ordinary was going on as far as I could tell.

I also get stopped by the police quite a lot, but they are always very polite and nice to deal with.
Posted by Jonas at 5:01 PM