Our guest is a very busy researcher, so after having had dinner in Asakusa he needed to go back to his hotel and e-mail important people about important stuff. This meant I had some time to do non-work things before it was even midnight. I got on the monorail Yurikamome (some people call this a monorail (because it looks similar to one) but apparently technically it is not a monorail; it is a "new transportation system" in Japanese) to Odaiba.


Odaiba is a district in Tokyo built entirely on "reclaimed land". Artificial islands were built by dumping landfill into the Tokyo harbor. The airport is also build on such an island.


Odaiba is known mainly as an entertainment district for young people, if I understand correctly. I was there to see the "Tokyo Trick Art Museum", though.

As luck would have it, a woman I know from Sapporo was also in Tokyo this Monday. She posted a photo on Facebook complaining about the heat in Tokyo and I mentioned that I was in Tokyo too. So she ended up coming to the Trick Art Museum 20 minutes after me, and we took lots of photos together. 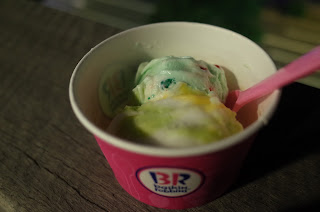 As a form of thank you for staying around taking photos for two hours, I bought her some ice cream. 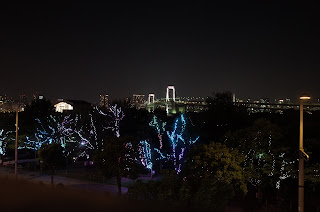 In Odaiba, they had something that looked like Christmas decorations blinking and flashing during the night. But August is a little bit too early for Christmas, right?
Posted by Jonas at 2:06 PM