I had to go to Tokyo for an important meeting early on Saturday morning, which meant an afternoon flight from Sapporo on Friday. The Friday we have the "once per year super fireworks festival", so that timing sucked. It was also the Friday a singer I know was going to visit our university. She e-mailed me and asked if I had time to meet, since she was going to be at the university anyway. 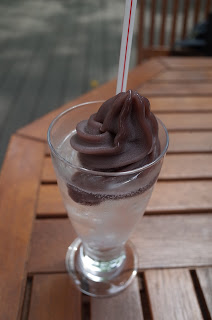 Since I was leaving at two in the afternoon, I suggested we meet at twelve and have coffee. She was supposed to have lunch with some professor at our university later, but he did not have time to meet up until 13:45, so we would have to have separate meetings.

I met with my friend the singer in a cafe near the main entrance to our university. It has been open for a few years now, and my Swedish friends often went there they said, but I had never been there. I ordered something that looked like sweet bean paste in water, but which was actually "hasukappu" ("honeyberry"?) ice cream in lemon soda. It was good, but everyone agrees that it looks like Japanese bean paste.
Posted by Jonas at 6:14 PM