Working on a Saturday 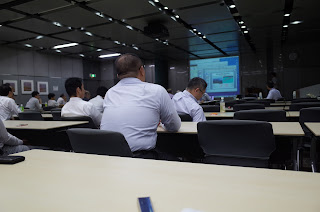 I got up ridiculously early on Saturday, checked my e-mail and saw that my colleagues in Sapporo had sent me lots of photos of fantastic fireworks in Sapporo ("If you look at these, it will be just as if you were here! And it is great here!", and tried to get to the Japanese government building where our meeting was held. It was 35 degrees Celsius, and walking on black asphalt surrounded by concrete walls was very tiring. But I got there more or less on time. Covered in sweat, though.


There were research presentations from all the teams in the Japanese government's "Big Data" research funding program. It started early, and when the last presentation ended it was just about enough time for me to run (again, 35 degrees Celsius) to the train and get to the airport in time to catch the last flight of the evening to Sapporo. I was more or less running for the train when my professor shouted for me and said that the report in English that our team was required to submit and that he was too busy to write so he had asked me to write it needed to be copied to his computer then and there, because the deadline was already past and apparently he could not access his e-mail, where I had sent my finished report. So a very stressed Jonas had to reboot the computer, find a USB stick, copy files, and then run to the airport. I made the flight with a few minutes to spare, though.


I met some of the international reviewers from the Big Data funding program, and since some of them are friends of mine, that was nice. They are funny. We did not have that much time to talk, since the meeting time was full of presentations and the breaks were few and short, but it was still nice to see them.
Posted by Jonas at 6:36 PM