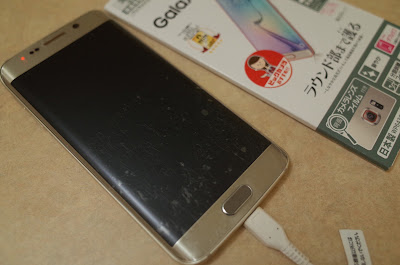 When I stuffed my fairly large cell phone into my not so spacious pocket, the protective film got stuck to the inside of my pocket and proceeded to glue itself to my pocket and remove itself from my cell phone for about half the length of the phone. Removing the phone from the pocket and putting folding down the film again did make it stick to the phone again, but with large amounts of cloth fibers stuck under the film. Not a great look. I ended up buying a new protective film with the points I got from the store when I bought the phone. This film is extremely expensive, by the way... 1700 yen.
Posted by Jonas at 6:23 PM