One magical night in Nagoya 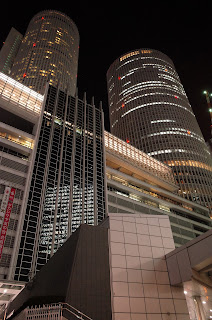 After having worked the whole Silver Week holiday, I asked my boss if it was OK to use some vacation days and go back to Sweden for two weeks. He first thought I said one week and was a bit skeptical but relented. After I understood that he though I would be back in five days (which is a bit short since the just the travel to and from my parents' place takes three days) I pointed out that I would actually be gone for two whole weeks. He then said that that was pretty much impossible, but I argued that since I had just lost four public holidays to work and then had my salary deducted too, I did not feel that motivated to work. And since I did not have anything in particular that needed to be done in October, it was also a good time to use up the vacation days, and I was finally allowed to go on vacation.


I bought some surprisingly cheap tickets to Sweden (only 60% of what I paid the last time). I had a very early flight from Nagoya to Europe, so I had to fly from Sapporo to Nagoya the night before. I found a magic bar in Nagoya (there are many) and spent an hour and a half there. It was fun.