In my previous lab at the university we had a student from Asahikawa, the second largest city on the Hokkaido island (Sapporo being the largest). One day I bought a ticket to Asahikawa for half the price from a friend who for some reason had bought a ticket months before but never gotten around to using it and the day I bought it was the last day it could be used. I asked our student from Asahikawa for a good restaurant to go to in Asahikawa and he recommended a yakitori (grilled chicken on skewers) place that had both good chicken and weird food on the menu.


I also managed to get hold of two aquaintances that lived in Asahikawa; two young (around 20) Japanese girls. They picked me up at the station and we went looking for the weird food. We ordered "inago" (grasshoppers) and "hachi-no-ko" (bee larvae, literally children of bees). This is actually Japanese food and not considered weird food at all in some parts of Japan. My Hokkaido friends consider it weird and not at all Japanese food, though. Perhaps because Hokkaido is too cold to house much in the way of insects? Anyway, friends from Gunma (further south in Japan) confirm that this is completely normal, and popular, Japanese food.

In Sweden we do not eat insects, so this food seemed strange to me. The two young girls that were with me also thought the idea of eating insects was disgusting, but we all dug in anyway. The girls managed to eat insects fairly well. I just figured "when in Japan..." and ate all I could find.

The inago grasshoppers were prepared in something sweet and tasted very much like raisins. A little bit dry, but otherwise quite good.

The hachi-no-ko bee larvae came in some kind of sauce that was also a bit sweet. They did not taste much except for the sauce taste, so the taste was good. Since these are larvae/egg like things, they do however explode in your mouth when you bite down on them. Thinking: "Ah, the inside of mouth just got covered in bee intestines" does feel a bit disgusting. Other than that, this too was quite fine.

Summary:
Taste: good
Texture: fine (crunchy) for the grasshoppers, a bit disgusting for the bee larvae
Look: a bit disgusting if you are not used to eating insects
Overall impression: surprsingly good, would eat again

P.S. While inago are quite good, I have also tried kourogi grasshoppers (a larger breed of grasshoppers) and these taste horrible. Do not mistakenly eat kourogi.
Posted by Jonas at 2:54 PM No comments:

The French exchange student in our lab pointed out that our university coop sells chocolate that they call "PetitBit". Presumably they used the English "bit" to indicate that it is a stack of small bits of chocolate, and the French "petit" to indicate that these bits are small. Since "petit" is French and there is a French word "bit" too, as someone who knows French it is not unreasonable to assume that both words are French. In which case it means "small dick".

Calling your product "small dick" is kind of funny. Strangely enough, our French exchange student keeps buying these and then asking me and others in the lab if we "want some small dick" from him...

In Japan, "petit" is quite often used but it is normally spelled "puchi". It took me quite a long time before I realized that the "puchi" that you see everywhere to indicate a smaller than normal version of something was actually a loanword from French.
Posted by Jonas at 2:36 PM No comments:

The topic of today's blog entry, tachi (or shirako) belongs in the later category, completely normal food. It can be served raw (common) or cooked in various ways. I have tried it lightly grilled (first time I had it), raw (also that same night), tempura fried, and raw in soy sauce together with raw oysters (a New Years feast delicacy). It is also common in miso soup and on sushi.

Tachi does not taste very much at all, and the taste is not bad, unless you really dislike raw fish taste, but then a lot of Japanese food will be tough for you. When you eat it, it is very soft and it kind of just melts in your mouth. This is apparently one of the good things about tachi from the perspective of most of my Japanese friends, but to me it is quite disgusting and one of the reasons I dislike this food...

Another reason to dislike tachi is the look of it. It looks as if someone handed you a raw brain from a small animal. Even Japanese people admit that it looks like a brain, but they helpfully tell you: "No, no, it just looks like a brain. It is actually sperm." I am not entirely convinced that this is so much more appetizing though...

This used to be cheap food I am told, and many people have fond memories of eating lots of this when they were kids. Nowadays it is considered more of a delicacy and is usually a bit expensive. It is not hard to find, though. Most izakaya (Japanese bars) have it on the menu in different forms, and many kaiten-zushi ("conveyor belt" sushi bars, sushi moves by you and you grab anything that looks good) serve it at least during the tachi season of the year.


Summary
Taste: not that bad (but not really good)
Texture: disgusting (melts in your mouth in a disgusting way)
Look: disgusting (looks like the raw brain of a small animal)
Misc: is actually raw sperm, and thinking of this may be unappetizing to some

In Japan, there are many signs, t-shirts, posters, product names, etc. that are written with Latin letters or have foreign names. Sometimes (surprisingly often, actually) the English (usually it is English) is quite broken. There are for instance more signs in Japan telling me that a shop is "Close" than there are signs that correctly state it is "Closed".

Sometimes the English or other foreign language is broken in funny ways. Here is a photo from our university coop, that evidently sells a "tit collection+". Though in this case it is just the (un)fortunate placement of the price tag that makes it interesting (it is supposed to say "Petit collection"). 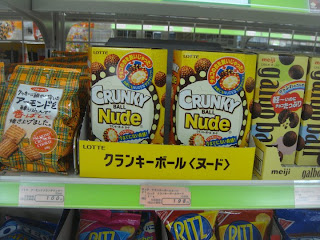 Here is another nice product sold at the coop: "Crunky Ball Nude". Who names a produce crunky nude balls? "Nude" and "Ball" can be expected to be understood by Japanese people too as what you might think of when hearing "nude balls".
Posted by Jonas at 5:23 PM No comments: 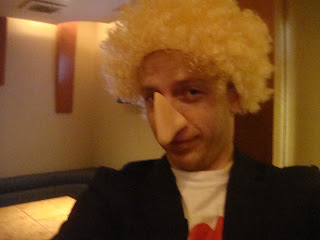 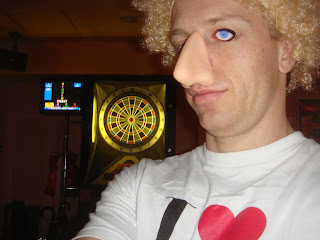 First Post! And boobies! (since sex sells, pictures of breasts and penises included)

On account of the old photo blog of my life in Sapporo having died the death of no more updates in 2008, I have decided to try to use actual blogging software to see if this will increase the number of updates I care to make.

First out is the tit and penis chocolate that I found two weeks ago. This is sold in a souvenir shop in the tourist street here in Sapporo, so possibly we are famous for tits and penises. Judging from the size of these chocolate things, perhaps not in a flattering way, though. Considering the estimated bust size of my female friends in Sapporo, the chocolate may be more or less on target in size, but my friends tell me it is just the clothes they wear that makes them look slim/undernourished/flat. Stating that this seems unlikely but if they remove the clothing and show me I may be convinced otherwise has so far mainly resulted in me being physically hurt.

The shop also sell cell phone straps with a Hokkaido-shaped attachment with two breasts called おっぱいどう "Oppaido" (sounds vaguely like Hokkaido in Japanese).
Posted by Jonas at 10:17 PM No comments: