When I got home yesterday, I found a CD with photos of my in my mailbox. It was my friend who got married last year who had sent me a CD with the photos taken by the wedding photographer that I was visible in. The photographer was very funny and a good photographer, so some of the photos of me were quite nice too.

In the comments it was suggested that I put the two photos of me and the cameraman together, so here is a quick hack doing that: 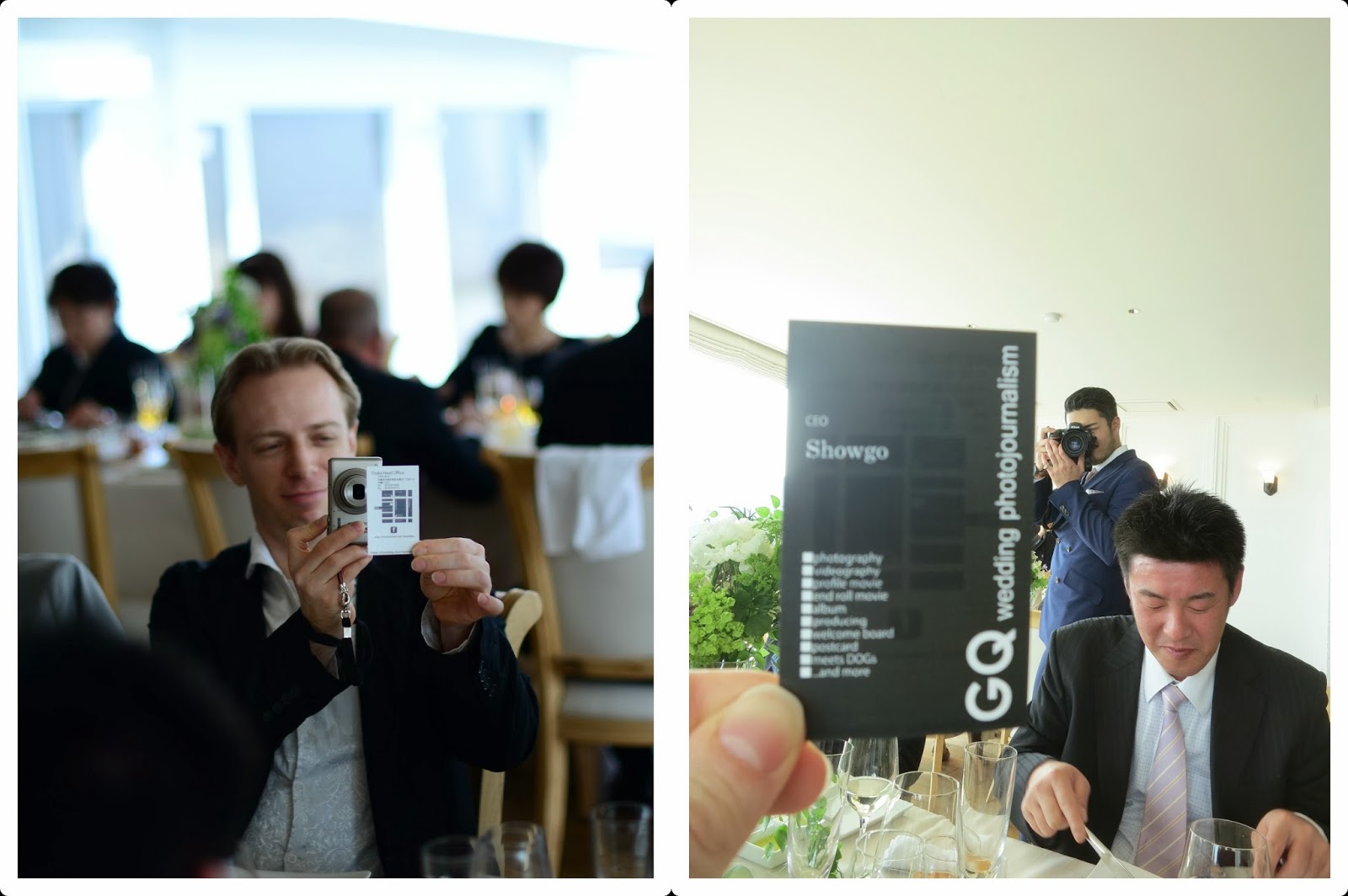 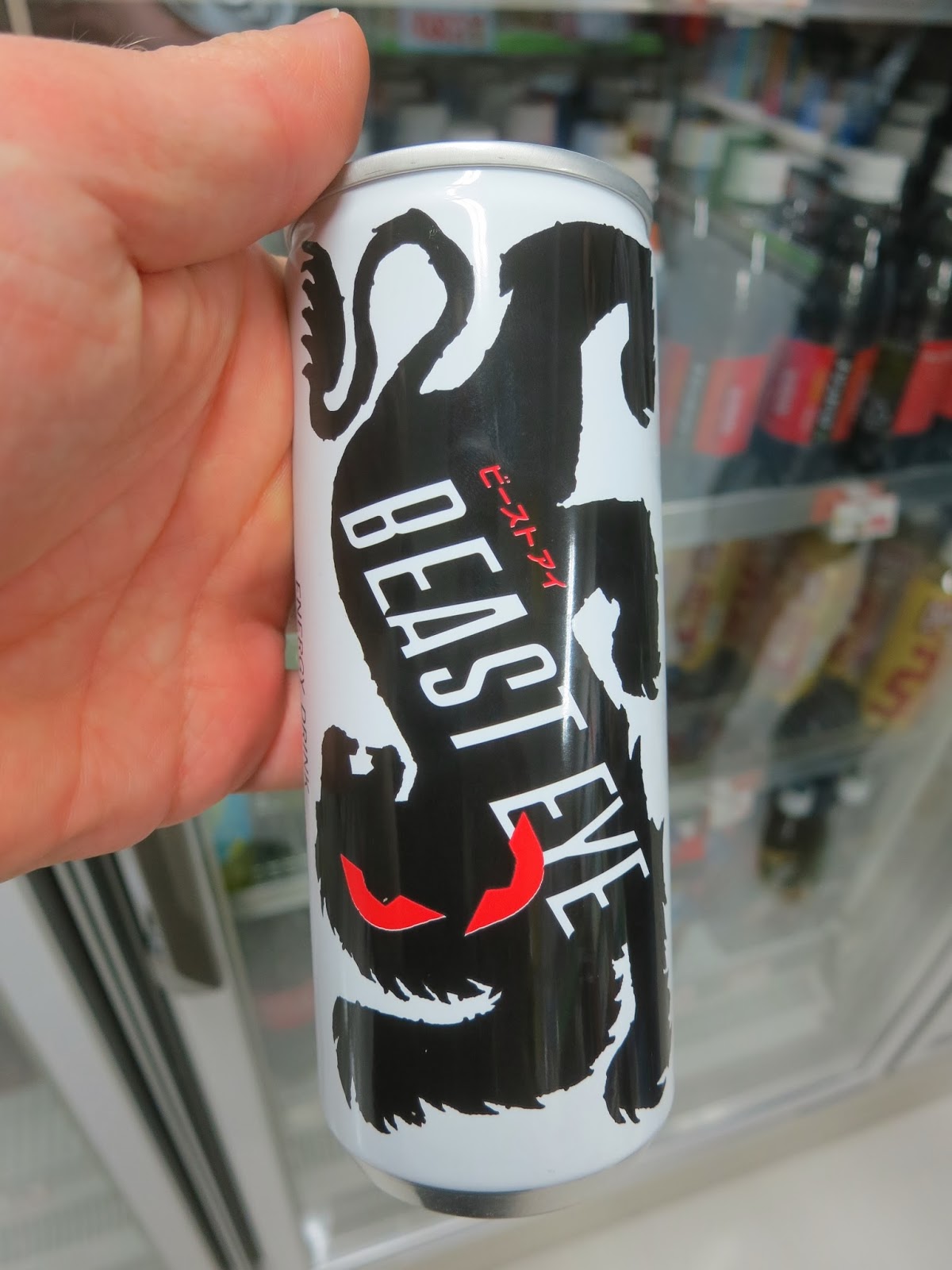 Two new products showed up in our university coop. One is an energy drink called "Beast Eye", where the logo is a bit strange. If you orient the can so that the lion in the logo is correctly oriented, the text is upside down. And of course, if you orient it so that the text is readable, the lion is upside down. Why would you make that design choice... 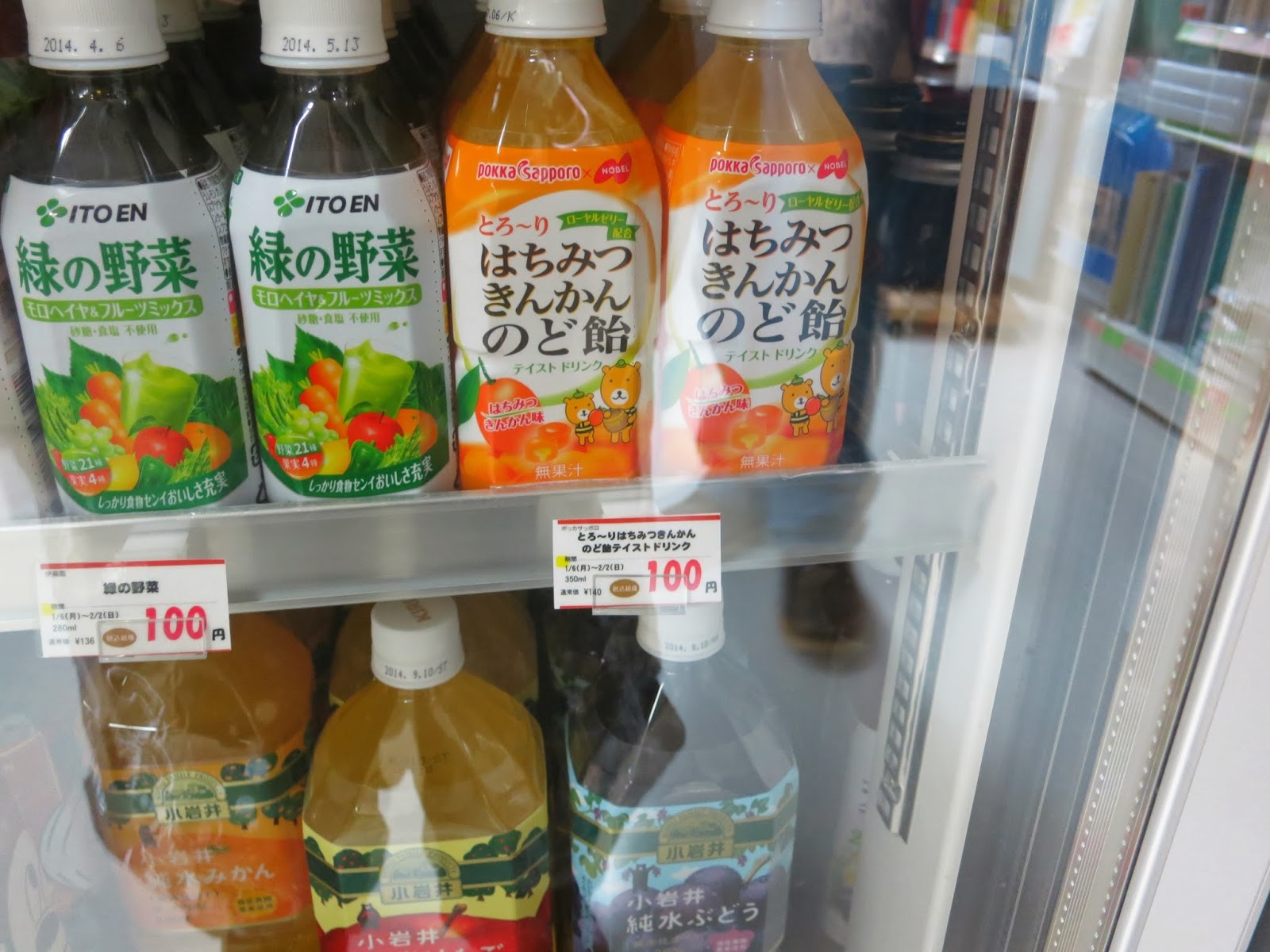 This meant he did not want me to order anything that did not require shaking. So I ended up drinking a lot of strange cocktails. He produced some coconut milk that some customer had brought because they wanted some cocktail to be made using coconut milk (and not milk + coconut liqueur that many bars use). They only wanted one cocktail, though, so they left the rest of the coconut milk and my friend thought it would be good for me to try out the more uncommon cocktails.

I also ran into a girl who is a Facebook friend of mine and who did some "cosplay" of a Macross character recently. She was not in costume this time, though.

Coat or no coat 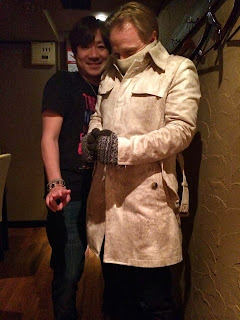 My boss in the magic bar thinks it is very funny that I now have a coat. I also once said: "It is cold today!" when walking half naked in a snow storm together with him. Based on this, he thinks me saying: "It is not very cold today" or "Sapporo does not get very cold" (compared to Sweden it does not) is just some sort of joke. 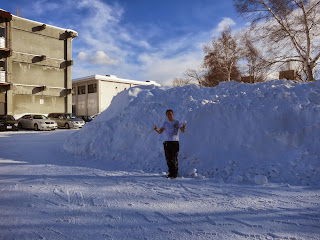 Yesterday, he asked me to pose wearing a coat so he could put a photo of that on Facebook. Today I took a photo in more normal settings, short sleeved in the snow, to balance things out, haha.
Posted by Jonas at 5:35 PM 2 comments:

Yesterday I met one of my magic hobbyist friends. We had Japanese food and talked about magic for a few hours. While waiting for him to get off work (he works holidays and Sundays too), I played a ユーフォーキャッチャー (UFO-catcher, crane game) in an arcade. I played only once, and as luck would have it I got what I wanted, and more. I wanted a small pen knife shaped like a Japanese katana ("samurai sword"). I rarely manage to pick anything in these games, but this time I got it on the first try, and it scraped two other pen knives with it too. I want to use it for one of my magic tricks.  I tried it out later that night in our magic bar, and it seems to work very well. Much better than the pen I used to use. 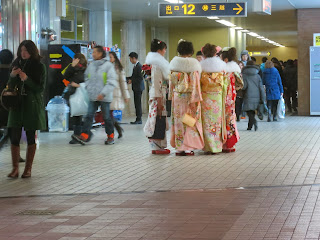 Yesterday was the 成人式 (seijinshiki, coming of age day) here in Japan, and people who have turned 20 years old since the last coming of age day dress up and have ceremonies (and photos taken) to celebrate that they are now adults (and they can now vote, smoke, drink etc.). 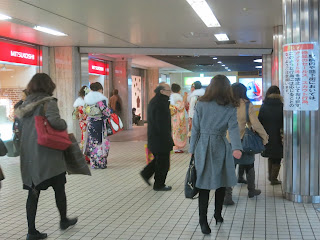 Men often wear suits (and some women do too) and women often wear colorful kimonos (some men wear Japanese clothing, though much less colorful; usually they wear hakama). I like these colors and clothes. In Sapporo, coming of age day is a bit cold, so I guess your feet might not like this type of clothing. 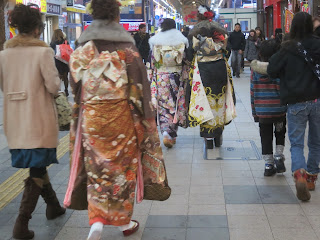 I have been thinking of going to one of the places were tourists can try on Japanese kinonos and have photos taken in traditional Japanese settings, but I never get around to it. The closest I have come so far is when I dressed up as a geisha in Kyoto. Which was fun, though.
Posted by Jonas at 5:22 PM No comments:

Party at the boss's house

Every year, our professor invites everyone to his home for a 新年会 (shinnenkai, start of the new year party). He usually schedules these for days when I am super busy, but this year I had the opportunity to attend.

I said I would go, and since it was to start quite early I asked the guys in our magic bar if it was OK if I left early the night before. They said sure, but asked where I was going. That made me realize that I do not actually know where my professor lives... No one had e-mailed me the address or anything like that. I did know in what general area he lives, though.

I went to the nearest subway station, and figured that there would be other people there that would know where to go. Like Dirk Gently, I followed some people that seemed to know where they were going. I also saw some students from our lab, so it seemed promising. The people I was following did try to get me to turn up the wrong road, though. But in the end, I reached the party.

There were over 20 people there, and the professor's wife had to spend long hours cooking for everyone. There was also a lot of alcohol there. Apparently you could only open bottles in a certain order (empty the cheap wines before opening the expensive ones, the same for all other types of alcohol), or your graduation from the lab would be delayed one year. This meant that most people got to try the cheaper (but not cheap) wines, and when it was time to break out the really expensive stuff many had already left or were too drunk to drink more (or to understand the quality if they did drink).

I tried 5 types of whisky, 3 types of Japanese sake, some Champagne, and some wine. I do not like alcohol, and when I tell people that I have never tried any Japanese sake (or whisky, or whatever) that was good, I am usually told that "Ah, you have just never tried any of the good ones". Now I have tried lots of expensive stuff, so that argument will no longer work on me, haha. The food was great (and the expensive whisky was much better than "normal" whisky, but still not something I would call good).


Our professor is a book collector, and he has an incredible number of books in his home (and at work). He showed us some, and they were very interesting. 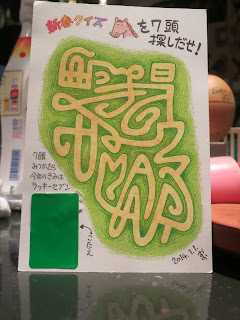 At Ropossa I was shown a New Year post card that says "there are seven horses [not exactly correctly translated] hidden here". It was quite clever. If you cannot read Japanese, it is probably completely uninteresting, though, haha.

I was also shown a black and white photo that some people have trouble seeing what it shows, but once you have seen it clearly, you can never un-see it. And I was given a big nail to hammer through my hand, as a gift. Very sturdy construction. 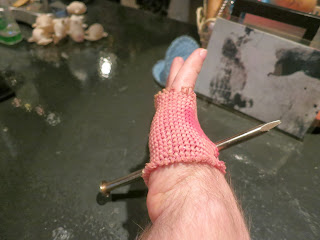 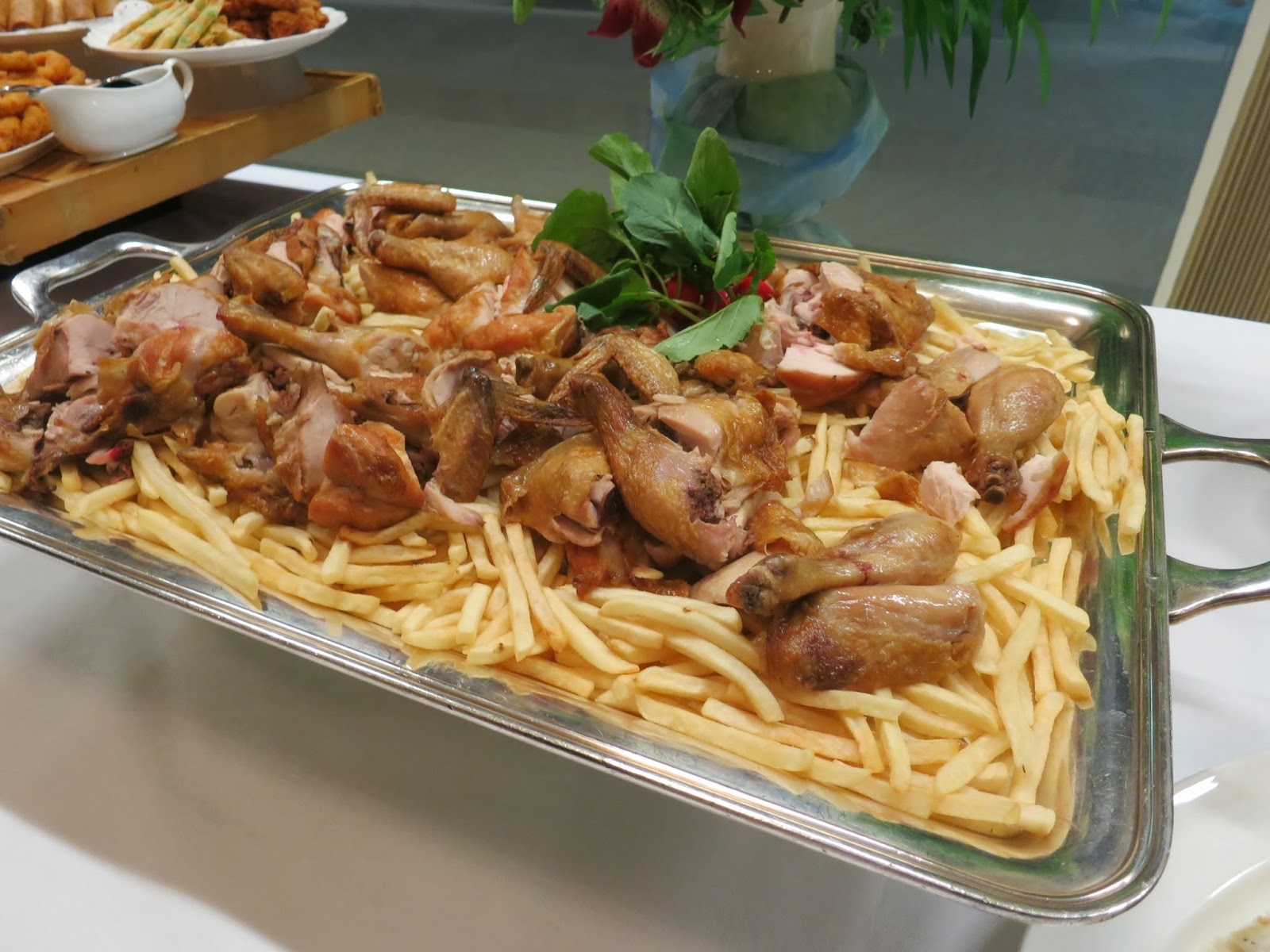 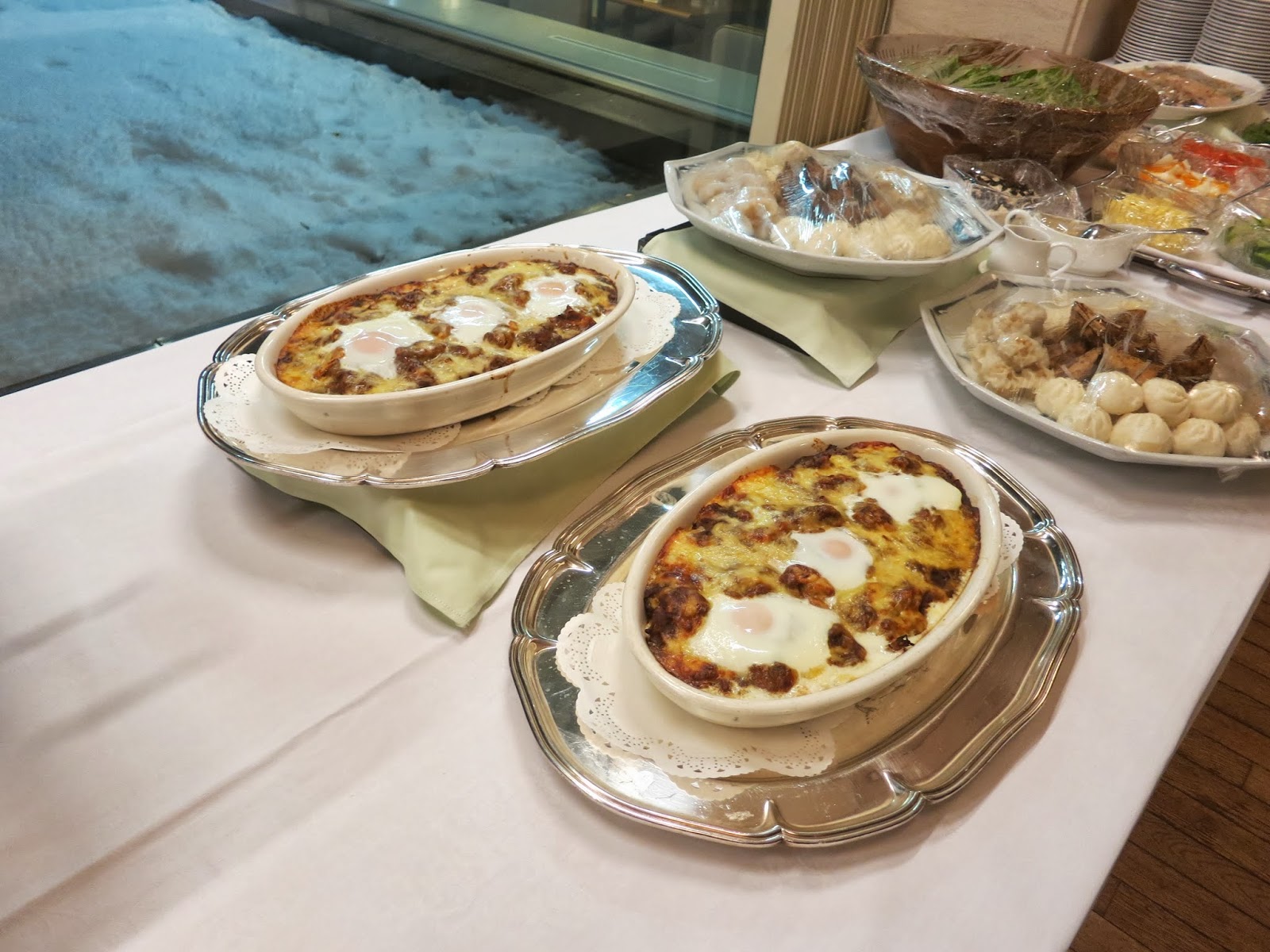 There is a professor working at the Information Science department that also does magic. He started learning magic about two and a half years ago, I think. He found out that I am a magician, and every year he finds me and asks me to show him something. He also shows me things he has learned recently. This year he also performed for a bunch of other people, and he had me show some things to one of the secretaries that happened to pass by. She later came with another secretary and told me to do the "perfect match" (predicting the perfect type of man for the woman you do the magic for) again. 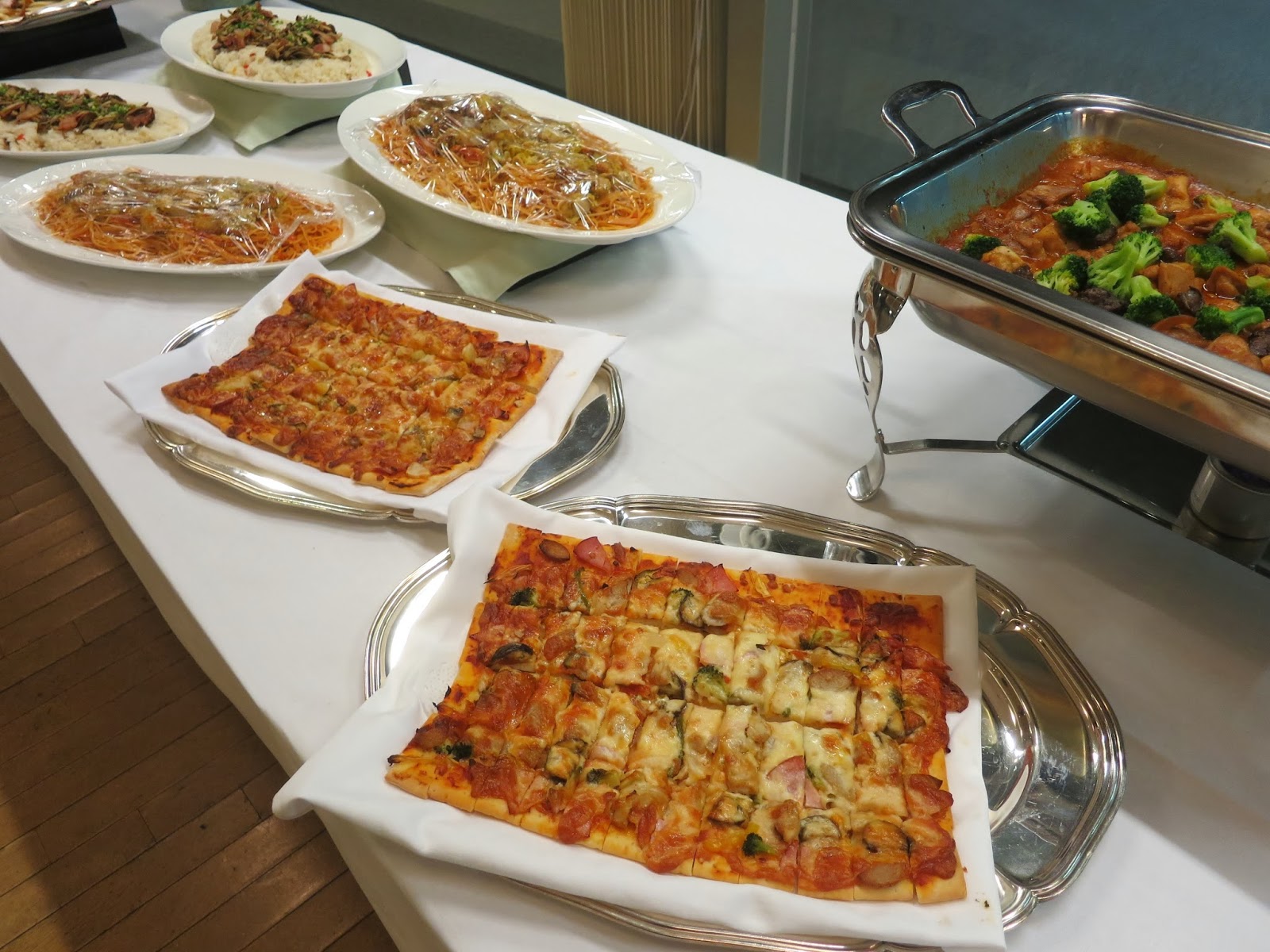 I also hammered a nail into my nose, did some ESP style card magic, and made some of the other guy's rubber bands disappear. It was quite fun. 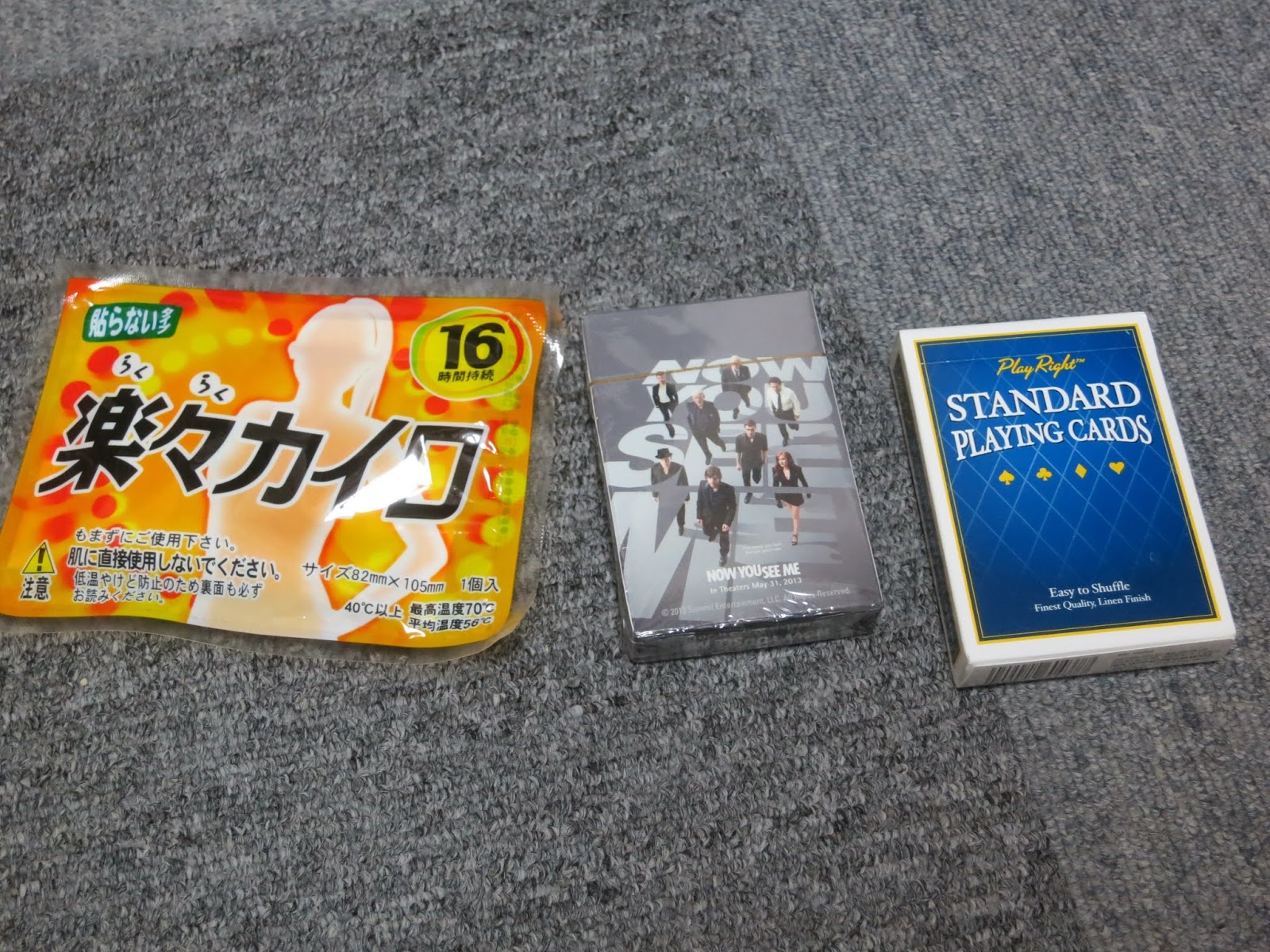 The visiting American magician gave me some American playing cards, which was very nice. On the same day, I also bought two stamps to send post cards to friends in Sapporo. The post office then gave me a chemical heating pad as a gift for buying stamps.
Posted by Jonas at 8:05 PM No comments:

Recently I have been trying to show a visiting American magician some of the magic scene here in Sapporo, and I wrote about that on my other blog.
Posted by Jonas at 8:03 PM No comments:

Yesterday I visited the bar Cocktail Bar Harada together with an American magician. Mr Harada is happy to show you magic if you are interested, and he also speaks English very well. I wrote about our visit on my other blog.
Posted by Jonas at 8:01 PM No comments:

Two days ago I visited the Sapporo magic bar "Hey Pola" with an American magician. It was a lot of fun, and I wrote about it on my other blog.
Posted by Jonas at 7:59 PM No comments: 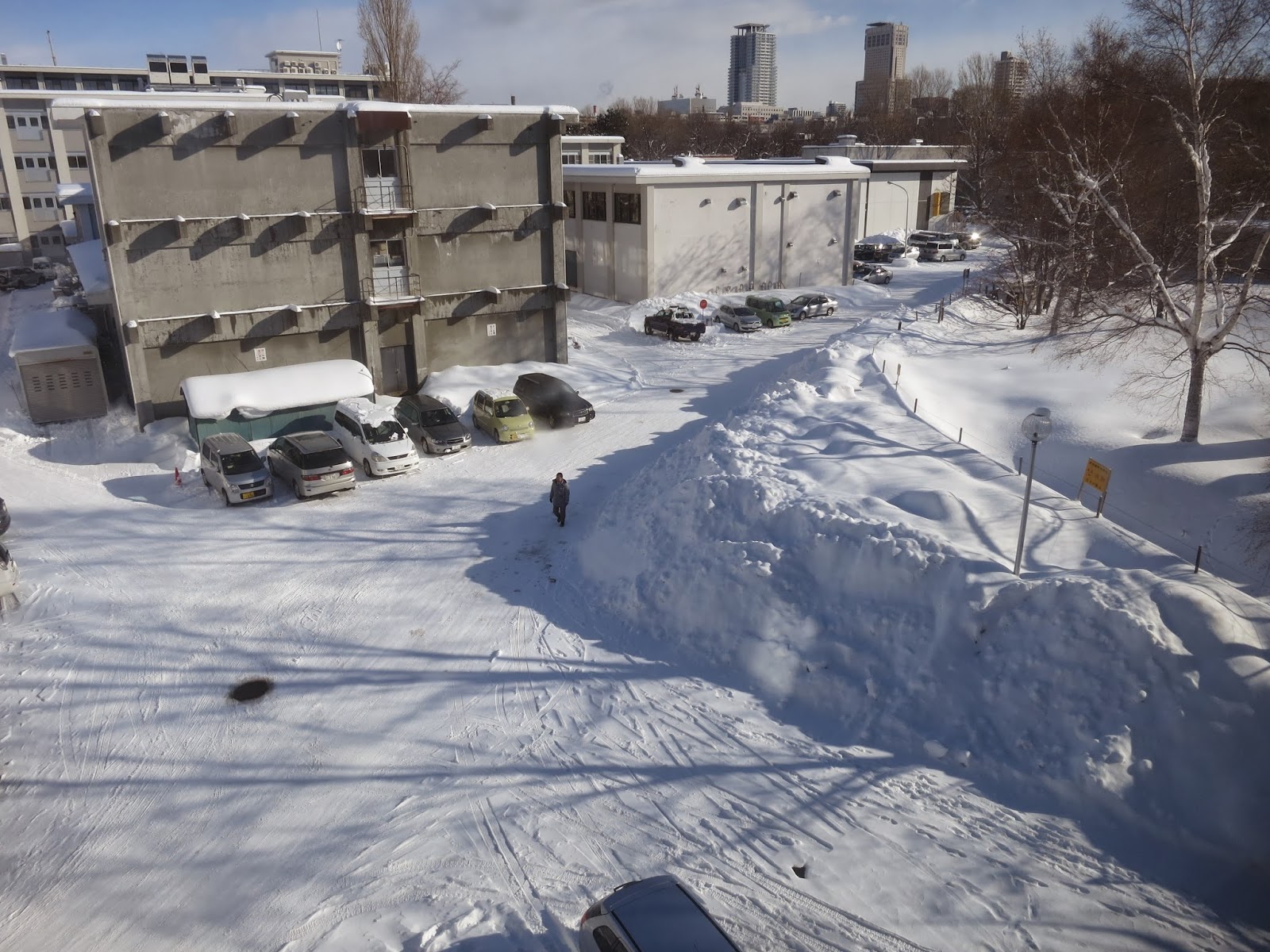 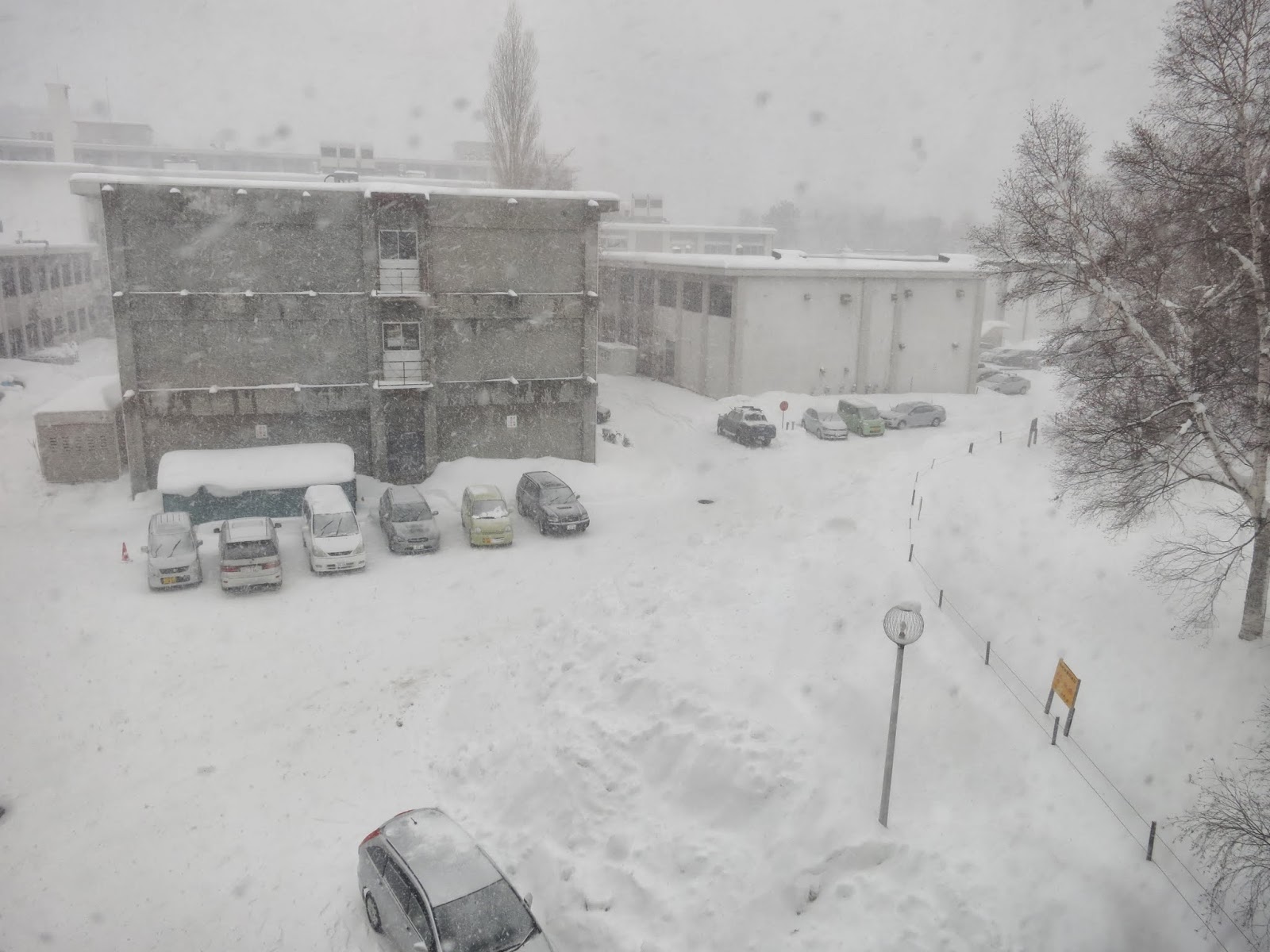 This is the view from the window near our elevator at work. When going to lunch, the weather was great. An hour or so later, not so great.
Posted by Jonas at 5:08 PM No comments:

When I was shopping today I saw a guy doing some magic (and singing and more) in the Sapporo ARIO shopping mall.
Posted by Jonas at 7:43 PM No comments:

Movie clip of me doing some magic at New Year

I put up a clip of me doing some magic for my brother's wife and her friends over New Year in Saitama.
Posted by Jonas at 7:37 PM No comments:

Yesterday night I stopped by our magic bar and said Happy New Year to our owner. He and I then went to Ropossa, a fun "magic snack". It was super crowded! We got New Year gifts!


We also saw the Mama doing some magic, and we talked to a guy who is the leader of one of Sapporo's top "Yosakoi" dance teams. He was interested in having us come to one of their parties and perform magic for the dancers.