Yesterday I attended Rootstock 2015. This was a bondage S&M event, with lots of things going on. I was there to do magic. At the previous Rootstock event I was asked to do 30 minutes of magic on the stage, dressed as a zombie. This time I was asked to walk around and do close up magic to people when nothing else in particular was going on. Dressed as a zombie.
There were many different performances at the event. There were four different bands playing music, mainly punk. They were all very good. There was a funny comedian called Dama. There was a great pole dance team called Nasty Cats that were great. They must be much stronger than I am, despite probably not weighing even half of what I do... They did some incredibly gymnastic things.
There was a striptease dancer called Sarai Ichimiya who did all kinds of things (dancing, acting, telling jokes, taking her clothes off, etc.) who was also really good. There were of course also bondage performances. The first one starred a girl I know from non-bondage circumstances too (she is dating a friend of one of my friends, a guy I have known since eight years ago or so). She had some men come up and stage and then tied them up, whipped then until blood came out, kicked them in the groin, bit them really hard, etc. She looked extremely happy all the time and laughed a lot, so she was very entertaining as a performer. Some of the stuff looked way more painful than what I find interesting to look at, though.
The second bondage performance was done by the organizer, the girl who invited me to these events. She tied up another girl, poured melted candle wax on her, whipped her, choked her, lifted her by the hair, etc. More of a serious drama style performance, unlike the first one which was more "let's laugh".
I kept running into people that I know. I know pretty much nothing about bondage, but since I performed at one of these events before, lots of people I met there still remember me. They come up to me and say hello in the supermarket, for instance. This time, there were lots of non-bondage things going on too, and many people where there to see one of the bands, for instance. I waved to a guy I know because he is extremely good at doing some things with playing cards, but he just looked confused. I found him again half an hour or so later when there was some down time in the program. When I asked him if he remembered me from when he visited our magic bar, he figured out who I am. I guess the zombie look threw him off. I also met a woman who visits the bar my friend works at. She was there to help with a tattoo shop that sold things (and gave people tattoos on the spot). 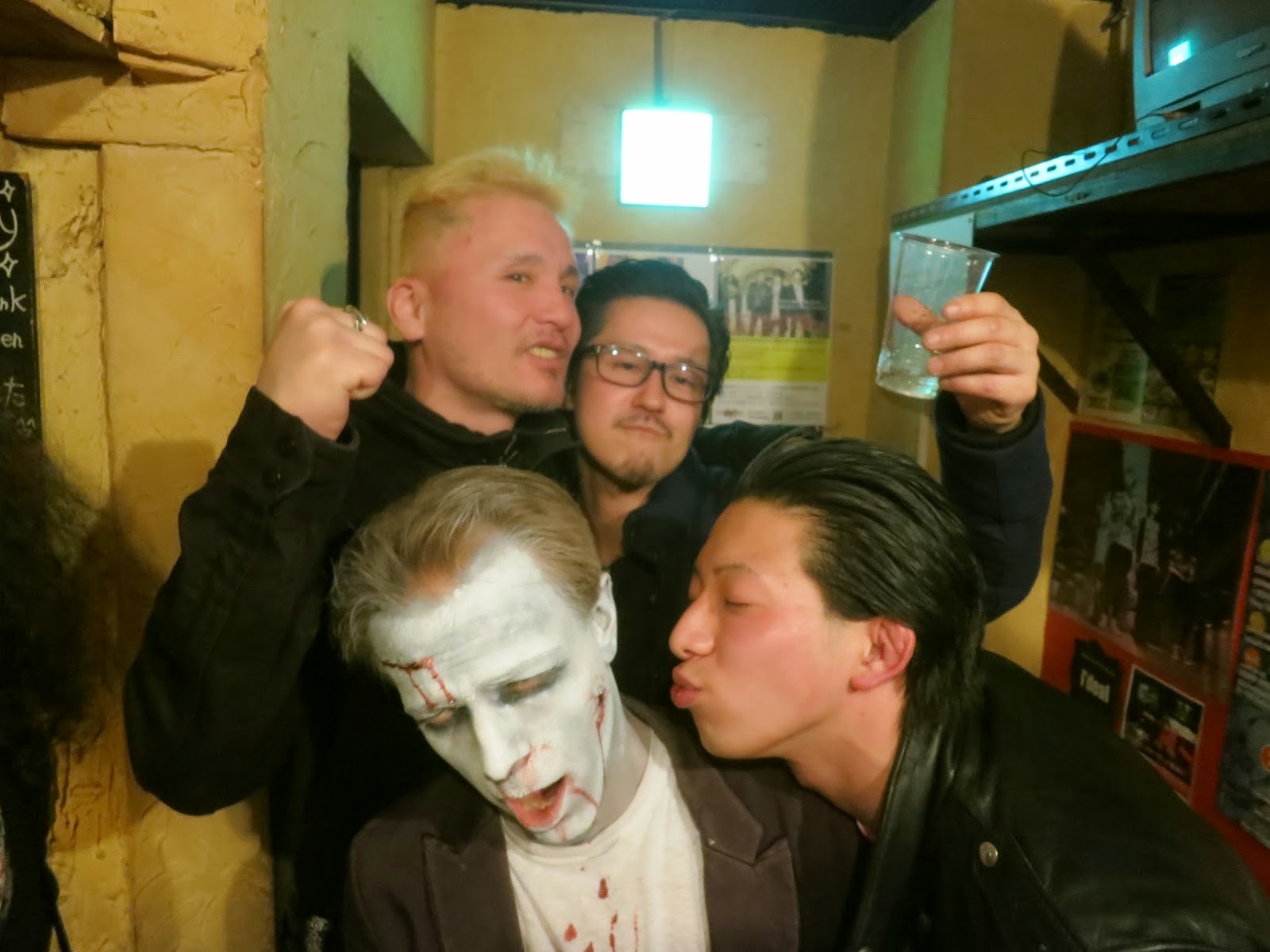 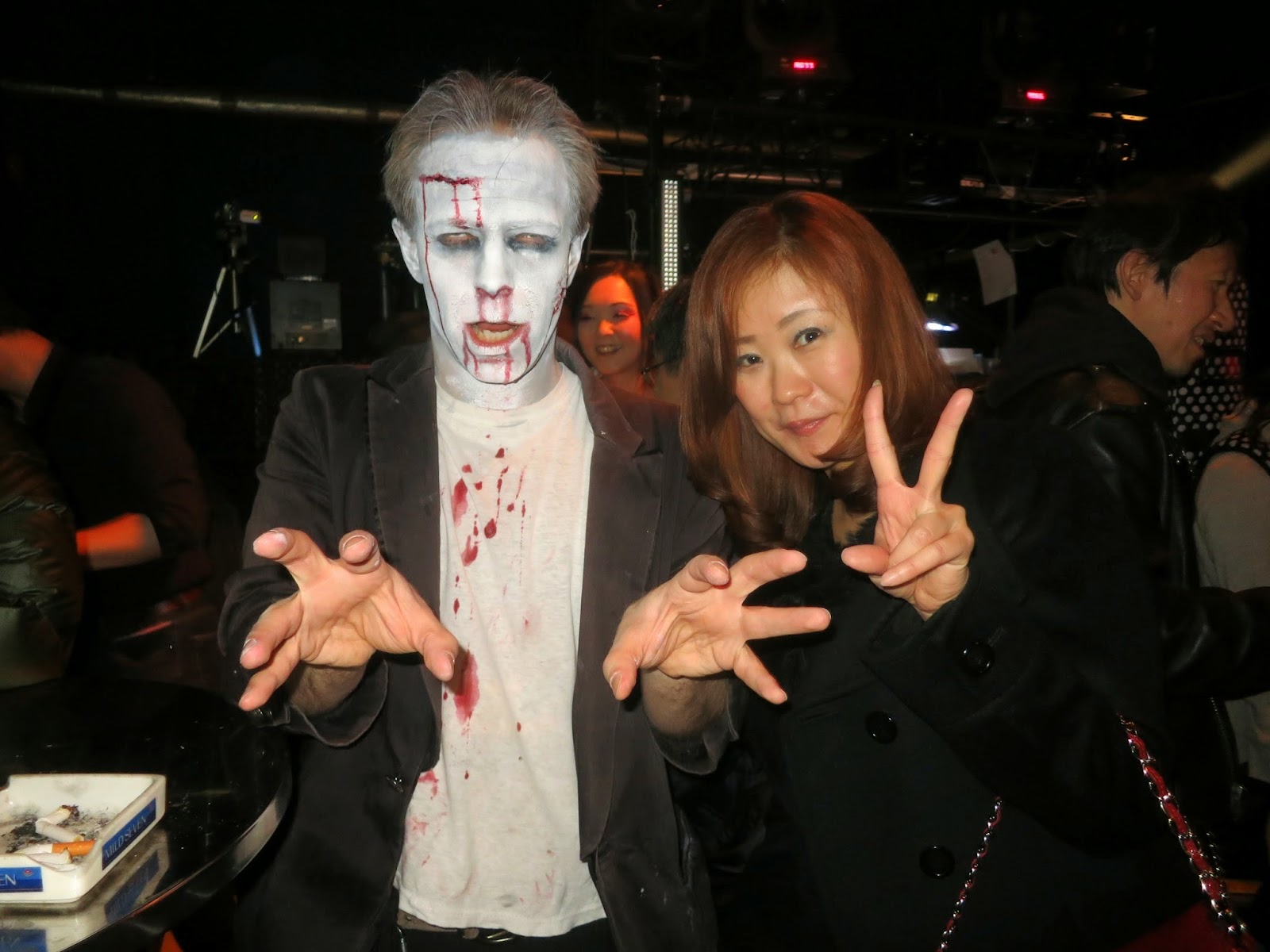 After the event was over, there was a party for staff. There there was a special performance where a man put a girl in a big zip-lock plastic bag and then sucked out all the air with something that looked like a vacuum cleaner. And when the girl is about to pass out, you open bag again. I have seen the same man do precisely that at another event where one of my friends was performing.
Apart from all the performances, there were also people selling things. Food, clothes, toys, sex toys, tattoos, fashion accessories, and more.
I bought some food. Two people I know where there selling hamburgers, so I bought one from them. It was excellent. I also bought some meat loaf from another woman. It was great. She gave me some more food for free too. Which was also good.
There was a giant hamburger up for sale too. It had 3 kg of meat inside, and the bread had been made to special order from a bakery. It looked way too big for any one person to finish. In the end, no one felt up to the challenge, so at the party after everything was over, it was given to a woman who happened to have her birthday that day. It was of course too big for her too, so it was cut up and shared between many people. I got one (huge) slice, and the hamburger was great!
People also came up to me and gave me things. One woman gave me chocolate because I did some magic for her. Another woman, who I know a little since she is friends with one of the magicians in our magic bar asked me if I can drink alcohol. I said yes. Then she said: "Then I am giving you this drink. I ordered a gin and tonic and it was tastes much worse than I imagined". I am not sure that was a gift to be happy about, but still. A gift is a gift, I guess. The drink tasted more like Moscow mule than gin and tonic, so I guess they made her the wrong drink (and that was why she was unhappy with the taste). There was also a guy who gave me a home made sweet potato dessert that he had made himself.
Apart from people performing, selling, cooking, etc. there were also people there just to watch and have fun. Many of them wanted to take photos together with me. Many of them looked weird, so I also took photos with some of them.