I bought my first yukata two years ago when my parents visited Sapporo. I was quite happy with it and it has served me well. This year, I ended up buying two new yukatas. One with playing card patterning, since my friends insisted this would be great for me as a magician, and one that just looked very nice that I found in a shop when I went to the wrong shop looking for the playing card yukata.

Sadly, both the new yukatas came with obis (belts) with a fake knot and Velcro. I have finally become happy with my results when tying the obi myself (my old yukata has a normal obi that you have to do everything with yourself). The new obis are pretty, but I am thinking of trying to find something similar without Velcro.

Anyway, my friends pester me about photos, so today I spent my sick-day taking pictures of myself in yukatas. 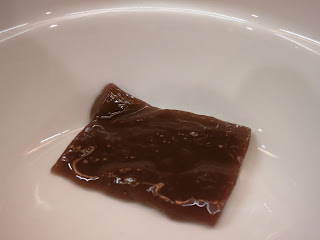 In Japan, raw liver was (and still is, I guess) a popular thing to eat. I do not like it particularly much. The taste is fine, but the way it just melts in your mouth is a bit unpleasant. And it looks kind of gross.

After someone died from food poisoning after eating raw beef (also popular; in general, raw food is popular so I have tried raw chicken, raw horse, raw beef, raw eggs, raw fish, raw fish sperm, raw liver, raw deer, raw deer liver, and probably many other raw things... the only things Japanese people do not like to eat raw are vegetables, go figure), there is a new law forbidding the serving of raw meat. This includes the raw liver. Raw fish is still OK, of course.

An acquaintance of mine bought "liver sashimi konnyaku", a new product. It looks like raw liver but is made from konnyaku. He gave me a slice to try. It does not taste very much, and the texture is slightly different from raw liver. It is much softer than konnyaku usually is, though. And it looks a lot like raw liver.
Posted by Jonas at 5:00 PM No comments: 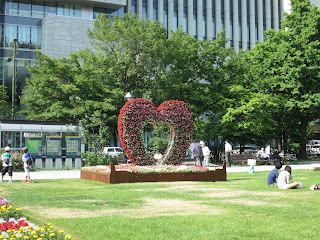 On our way back from lunch today we passed Odori park (we also had to visit a bank, and a ticket selling office; me to translate, the others to do business). This flower arrangement is new, I think.
Posted by Jonas at 5:13 PM No comments: 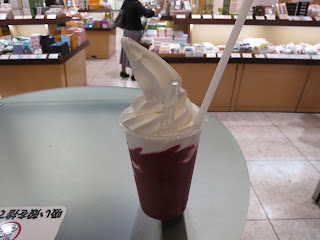 The Greek guys also took us to an ice cream and fresh pressed juice bar on our way back from lunch. They consider it to have the best ice cream in Sapporo.

You could have "soft cream" in vanilla, chocolate, melon, or strawberry taste. It could come served in a cup, a cone, or floating on juice of your choice.

When I cannot decide, I usually pick the most expensive thing, since if it is expensive it must be good (right?). So I got ice cream floating on freshly mixed blackcurrants. I asked if you could have any kind of ice cream even when ordering the juice thing, and they told me yes. After which I still ordered vanilla and they laughed at me...

Double or nothing Chinese food 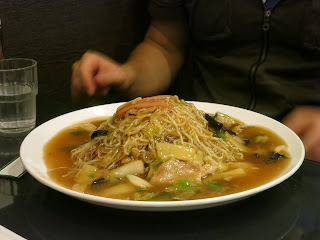 Today a Greek colleague of mine took me, our French exchange student, and a visiting Greek professor from France (yes) to a Chinese restaurant with a peculiar system. If you order ankake yakisoba, their specialty, you pay 682 yen for "normal size". You can also order "large" or "enormous", and these sizes will also cost 682 yen if you finish all your food. If you leave something on your plate (or give food to your friends), you will have to pay twice the normal price instead. 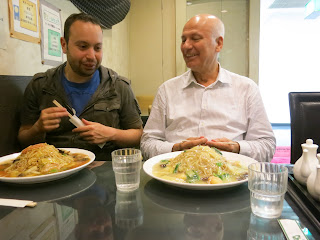 Even the "normal" size was pretty large, but the two Greek guys ordered the middle size ("large"). Both managed to finish their meals. I ordered something completely different, which was also good.
Posted by Jonas at 5:07 PM No comments:

Magic show for kids at MACS

On Saturday I did a magic show at the English conversation school MACS. I was there last year too, and then did around 30 minutes of magic followed by teaching the kids two simple card tricks for another 30 minutes.

This year it was much the same. So I had to come up with more or less 30 minutes of new material, which was a bit difficult. I have some other new material since last year, but some of it is not suitable for kids...
Anyway, I had lots of fun, and the kids seemed to have fun too.

In Tokyo, the recently finished building the Tokyo Sky Tree. It is 634 meters high, and thus one of the highest man made structures in the world (currently number 2, I think).

Since it is newly opened, if you want to go up to the observation deck you have to book tickets well in advance. It is sold out for the next 6 months, I am told!

We had no tickets, so we only took pictures from below, and went shopping in the shopping area underneath/around the tower. There is a Studio Ghibli (Japanese anime) shop that is very nice, and a shop selling food sample thingies made from plastic that is also very interesting. The shopping areas are also very crowded, though. 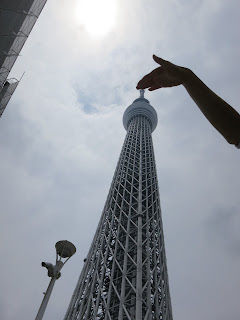 I went to Tokyo with a friend to visit some magic bars. More details are available at my magic blog.

First, I also wanted to buy a t-shirt with a salmon eating salmon sushi. I have one, but I use it for magic and would like to have two or three more, so I can do this trick several days in a row without having to do laundry every day. Sadly, the t-shirt shop where I bought it is now gone! A big shock! No other shop nearby (or anywhere else in the world that I know of) sells this t-shirt either... I ended up buying a few other t-shirts instead. One has a family of bears eating a bear paw (same series as the salmon), one has "ドM" written on it (which means "very M", as in the M from S&M), and one has "by some definition, a god" written on it in Japanese.

The magic bars were great. We went to one place called Usagi-ya, that we had not been to before, that served great food too. We had a full course meal, and got to see two different magicians perform during our dinner.

Then we went to Magic Bar Surprise, just two minutes walk from Usagi-ya. There, three different magicians did magic for us. One of them remembered me very well from my previous visit.

Finally, we went to the magic bar Half Moon, which is possibly the best magic bar in Tokyo. This was great, as always.

Swedish things at the Sapporo Festival 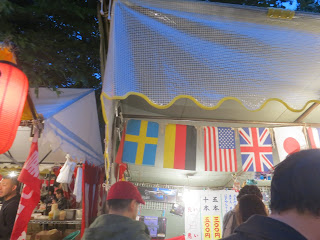 When looking through my photos from the Sapporo Festival, I noticed a lot of Swedish flags. 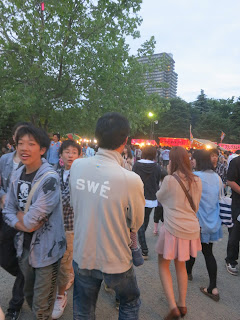 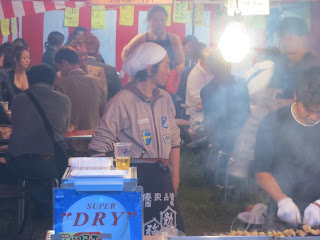 I have a magician friend who does magic as a hobby. We were introduced by a girl working in a bar where both of us used to go but where we had actually never met. She told me: "There is another magician who comes here a lot. Next time he comes, I will call you." After she introduced us, we have become very good friends.

Anyway, the restaurant where she now works had their one year anniversary recently, and she asked us if we could do some magic at their anniversary party. The timing was really bad, since we were scheduled to fly to Tokyo early the next day, but we said yes anyway because she was the one who introduced us.

We walked around and did close up magic for people, and also did two sets of parlor magic in front of all the guests. We even did a small illusion, making one of the waiters disappear and then reappear outside the restaurant.


There were some other performances during the night too, like stand up comedy, singing, and a group of people playing African drums (they were great!).
Posted by Jonas at 4:32 PM No comments:

After visiting the shrine festival, I also went to Nakajima-Koen park to have some more festival food and to see some fun sights.

I always wondered what the "Bikkuri House" was. Bikkuri means being surprised in Japanese. I asked a Japanese friend and he said it was where people eat live snakes or do other grotesque carnival style things. It is always right next to the "obake yashiki" (ghost house), which I guess also makes you "bikkuri".
Anyway, I decided to go inside and see for myself. It turns out that my friend was wrong. The bikkuri house was actually a metal box inside another metal box. You go inside, sit down on a bench, and then the staff starts spinning these boxes back and forth in different directions. The inner box does not actually do a 360 degrees rotation, but you feel quite sick after all the walls are spinning around and your guts are bouncing up and down from the fairly large rotation of the inner box... It does not help that you just spent a few hours eating weird stuff in the festival either... I managed to not throw up, but would not recommend the ride, haha. 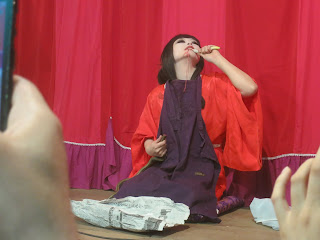 The place where people eat live snakes turned out to be the house next to the bikkuri house (not the ghost house, though; on the other side). I went inside just as the "eating a live snake" part of the show was about to start. The place was packed and people stood packed like sardines. The carnival people inside immediately noticed that I was a foreigner and said that since this was a very special show probably not available in Europe, I should stand right in the center, in the front line. So they made everyone else make a path for me, so I could go and stand in the best location for the show! 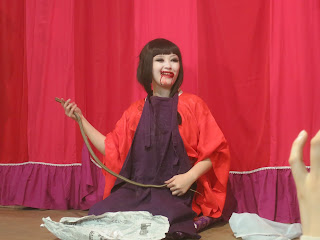 Then a woman came on stage, sat down and put on an apron. Another woman walked around with a live snake and had the people in the front (including me) touch the snake to check that it was a real snake.

The snake eating woman then licked the snake for awhile, and then bit into it. She tore it in two using her teeth. Then she squeezed out all the blood from the snake into her mouth. Finally she bit off a few centimeter of snake that she chewed and swallowed.

After that, she was going to put away the bloody snake leftovers but suddenly changed her mind and threw the snake carcass at the girls standing next to me, haha. Actually she had switched out the snake for a rubber snake, but the reaction was very funny, though somewhat painful. Suddenly there was a 1.5 by 1.5 meters large whole in the audience, where people had been crammed in before... People jumped out of the way of the flying snake onto other people, and stepped on each others' feet etc. Lots of screaming, haha.

The show continued with some singing and dancing, and then a girl with huge boobs showed up. They did some magic where this girl floated in the air. Finally, a very short girl came out and lifted a "very heavy rock". The people on stage asked a kid if he knew what the thing on stage was and he said something like "looks like Styrofoam" but they apparently "could not hear what he was saying" so they asked a slightly older boy. He said that it was a "rock", and they said that indeed it is nice to see people mature enough to answer questions properly, haha.