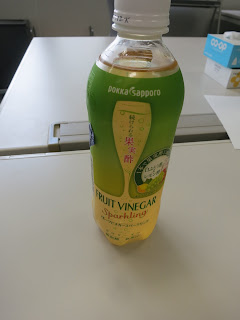 Today I found a new drink in our coop: "Fruit Vinegar Sparkling". This is grape juice mixed with vinegar and then carbonated. I did not like it. My colleague tells me drinking vinegar is popular now because "it makes you lose weight".
Posted by Jonas at 6:05 PM 1 comment: 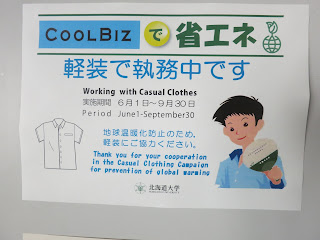 The office here has a sign that says that everyone should wear casual clothes from June to September, to save the planet and prevent global warming. They also recommend that you set your air conditioner to 28℃ and stop wearing a jacket (or even untie your necktie!) instead of cooling the rooms more than that. I wear were casual clothes all the time, so I guess that makes me very environmentally friendly.
Posted by Jonas at 5:01 PM No comments: 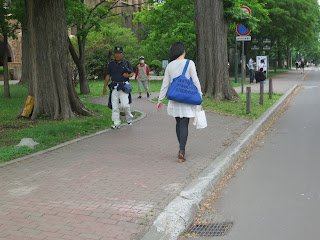 Today I saw a girl with a bag with Swedish text on it inside our university. The text is a bit strange, and if I still remember my Swedish correctly, it is also incorrect.

The bag says: "Ska tåget stanna på Stockholm?", which roughly means "Will the train stop in Stockholm?". Why you would want that on your bag is not obvious, but then again, why not? If I were to write that sentence in Swedish, I would use a different preposition, though. "Ska tåget stanna i Stockholm?" is what I would write, or even "Kommer tåget stanns i Stockholm?". To me, "på" is not only unnatural, it is wrong. But I rarely use Swedish anymore, so I may be wrong.
Posted by Jonas at 4:58 PM 2 comments:


One week after the Yosakoi festival we have the Sapporo Festival. The Hokkaido Shrine and other shrines have lots of Shinto things that they do, and the big Nakajima Koen park is filled with food stands and strange attractions.
I like this festival, since the food stands sell some interesting food and it is a good chance to use my yukatas. There is one negative side to the festival though, which is that the temple outside my building becomes very active in the mornings. There are parades of religious things being carried between different temples and shrines in the city, and the processions are accompanied by musicians. They play the same 5 second flute melody over and over for hours, and they bang huge drums very loudly. The processions are also very long and very slow, so they get stuck at the red light in the intersection outside my building, so a single procession can be outside my window for 30 minutes. This makes it hard to sleep on Saturday and Sunday morning...

The festival area is filled with fun, though. I saw a woman eat a snake that was still alive when she started chewing on it, and another woman eat a raw chicken and drink melted candles. There was also a guy that stopped an electric fan with his tongue. Other tents have "ghost house" experiences, motorcycle show of death, shooting games, ring throwing games, soccer games, baseball games, carving shapes in sugar games, and much more. But mainly there are endless rows of food.


The Hokkaido shrine also has food stands during this period, and some shows. They have karate shows, monkey shows, and, somewhat unexpectedly, jazz concerts. 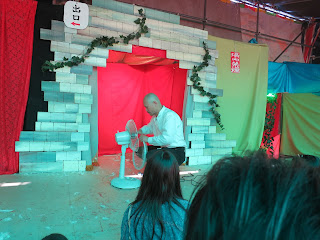 Broken back pasta, and free pudding 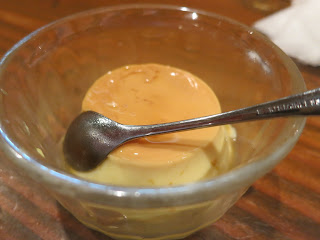 I finally found time to visit a pasta place I like, and which I used to visit once or twice per week. Now it had been over 8 months since last time. It is a very small place, with the owner doing all the work himself.

When I had just moved to Japan, I lived close to this restaurant and the owner would usually talk to me about all kinds of things so I learned a lot of my Japanese by eating there. When I went there now, he said "long time no see", and asked if I had tried to come there recently. I said no, since I have been travelling and been away from Sapporo more than I have been here, lately. He also closes at 20:00, and despite my contract saying I should only work until 17:00 I rarely get away before 20:00.

Anyway, the restaurant had been closed from the middle of January until quite recently, he told me. He had fallen out of a window when removing snow from his house and when he hit the ground he broke his back. He spent one month in a hospital and two months recovering at home.

Now he is back in the restaurant, and his wife has started making vanilla pudding for his restaurant. I gave me a serving of pudding for free, and it was very good. The pasta is also very good.
Posted by Jonas at 4:30 PM No comments:

"Please calmly run for your lives" 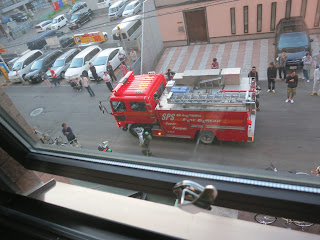 On Thursday morning I woke up to an alarm and thought that morning had come way too early. It turned out not to be my alarm clock, and not to be morning. At four in the morning the building started shouting, and it said: "There is a fire. Please calmly run for your lives." So I grabbed my passport, my external harddrive with my photos, and the work laptop (because I am just that nice to my employer to save their property), put on some clothes and then calmly ran down the stairs (I live on the 9th floor) and stood outside with a lot of other people for an hour or so.

It luckily turned out to be a false alarm, so the building and the rest of my stuff, is still doing fine. While waiting around outside, I figured it might have been a good idea to bring all my banking stuff too. Trying to access my Japanese bank accounts without the proper papers may well be quite difficult. Accessing my Swedish bank without my current props would require physically going to Sweden.

While waiting, I e-mailed a friend and explained that I had "避難" (evacuated) because my house had a "火事" (fire). When I was allowed back into my apartment, I was not very sleepy so I decided to do the hip thing and update Facebook and Twitter about my daily life. Then I wrote "家事です。落ち着いて非難しなさい" instead of "火事です。落ち着いて避難しなさい", which reads the same but means something very different. I blame being very tired and the stupid kanji prediction of Windows (my cellphone defaulted to the correct kanji) since I have never used the word 非難 but have used 避難 many times and would expect it to default to that (excuses excuses...). So instead of "The house is on fire, run for your lives" it became "Housework is ongoing, make sure you complain"... Though since the fire alarm is only spoken Japanese, and since there was no fire, I guess it could be that it was warning us about housework.
Posted by Jonas at 4:23 PM No comments:


After the school festival and the clean-up was over, the magic club had a party. Usually they have the parties on Fridays, but this time it was a Sunday so I could attend. At the second "after party", the people who entered the club because they are magic nerds (like me) ended up pulling out cards or coins from their bags (not even I walk around with 10 decks of cards... nerds...) and doing maniac level magic to each other. Good times. 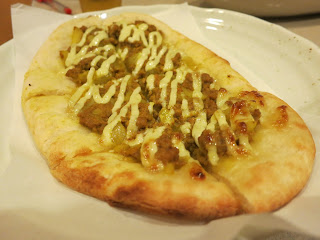 A surprisingly large number of members have never done any magic or been interested in magic before joining the club, they just join because apparently in Japan you have to join some club and if you do not like sports, why not magic? They were mostly drinking alcohol instead of doing magic. 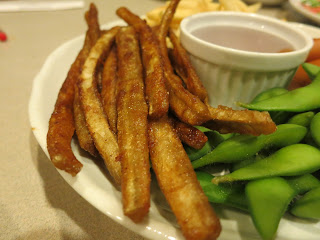 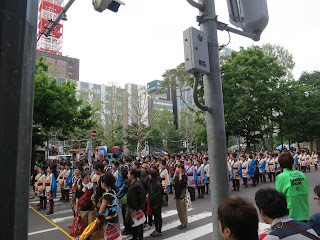 The same days as the Hokudai school festival, there was also the Yosakoi festival in Sapporo. I like this festival too and would have liked to go there, but since I spent most of these days in Germany listening to not that exciting research presentations, I missed this year. I saw two performances on my way home (the streets are closed off and it is hard to pass).

Yosakoi is a kind of team dancing to techno version of old traditional songs, and the team members have to do some old traditional moves some time during the dance performance. The rest of the rules seem to be "anything goes", though I have not checked any details. 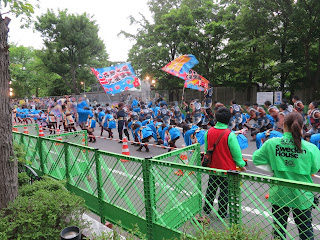 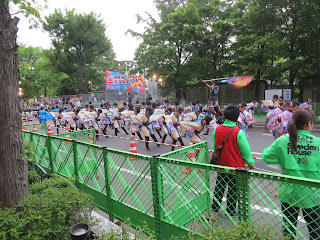 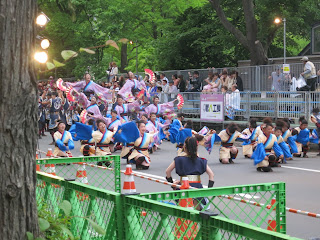 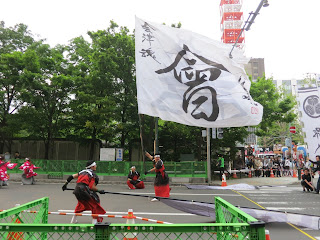 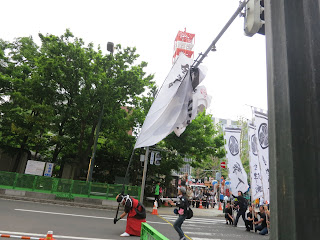 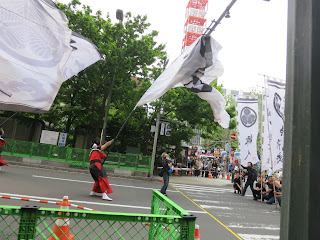 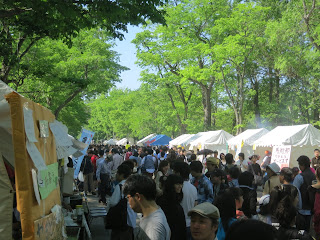 The university school festival is a fun event, and it started two days before I even got back to Sapporo, soI missed most of it. I did manage to see some of the performances, and eat some of the food, though.