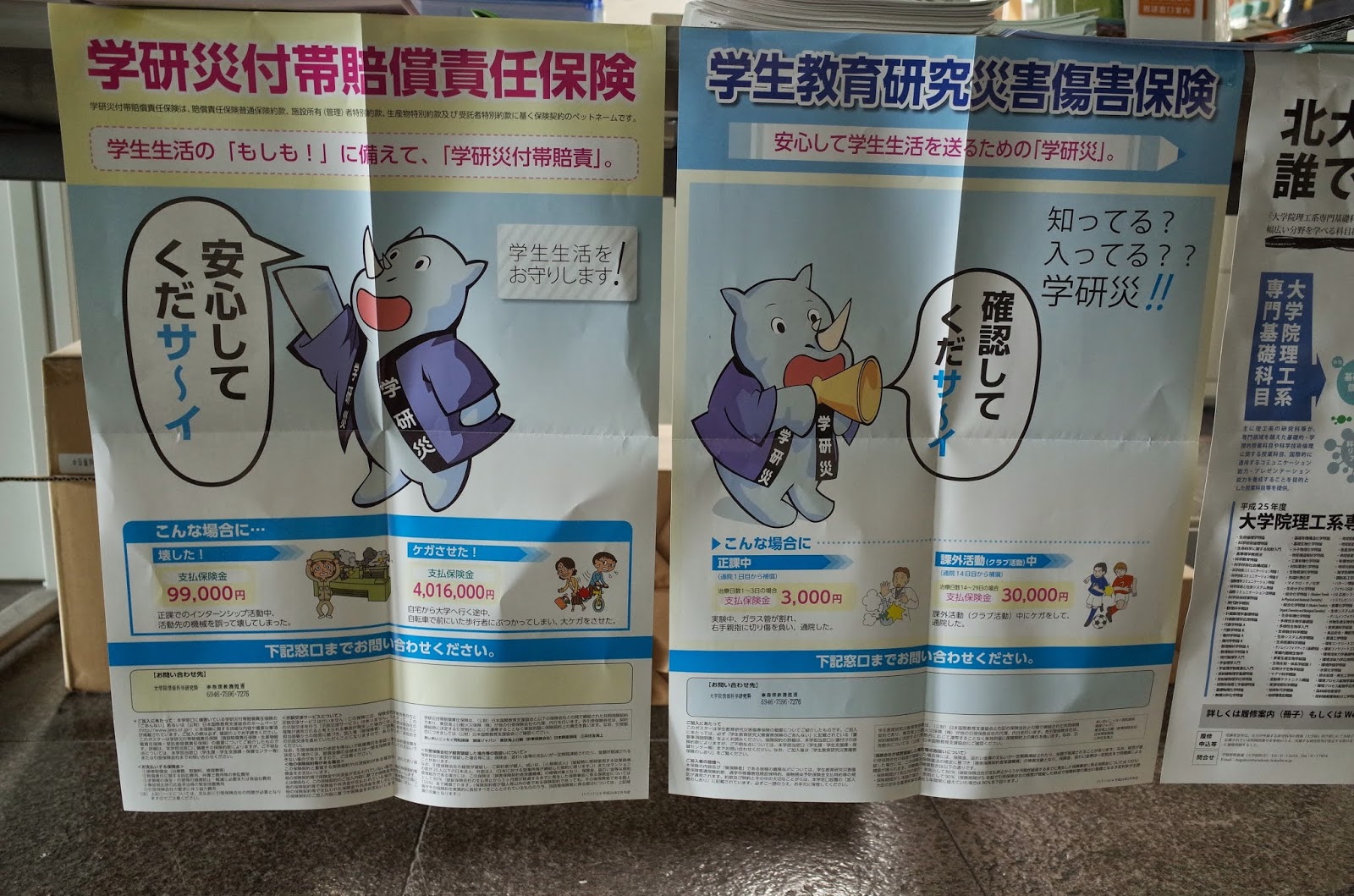 My colleague tells me there are lots of videos from Japanese TV with bad animal puns to teach people polite Japanese.
Posted by Jonas at 5:06 PM No comments: 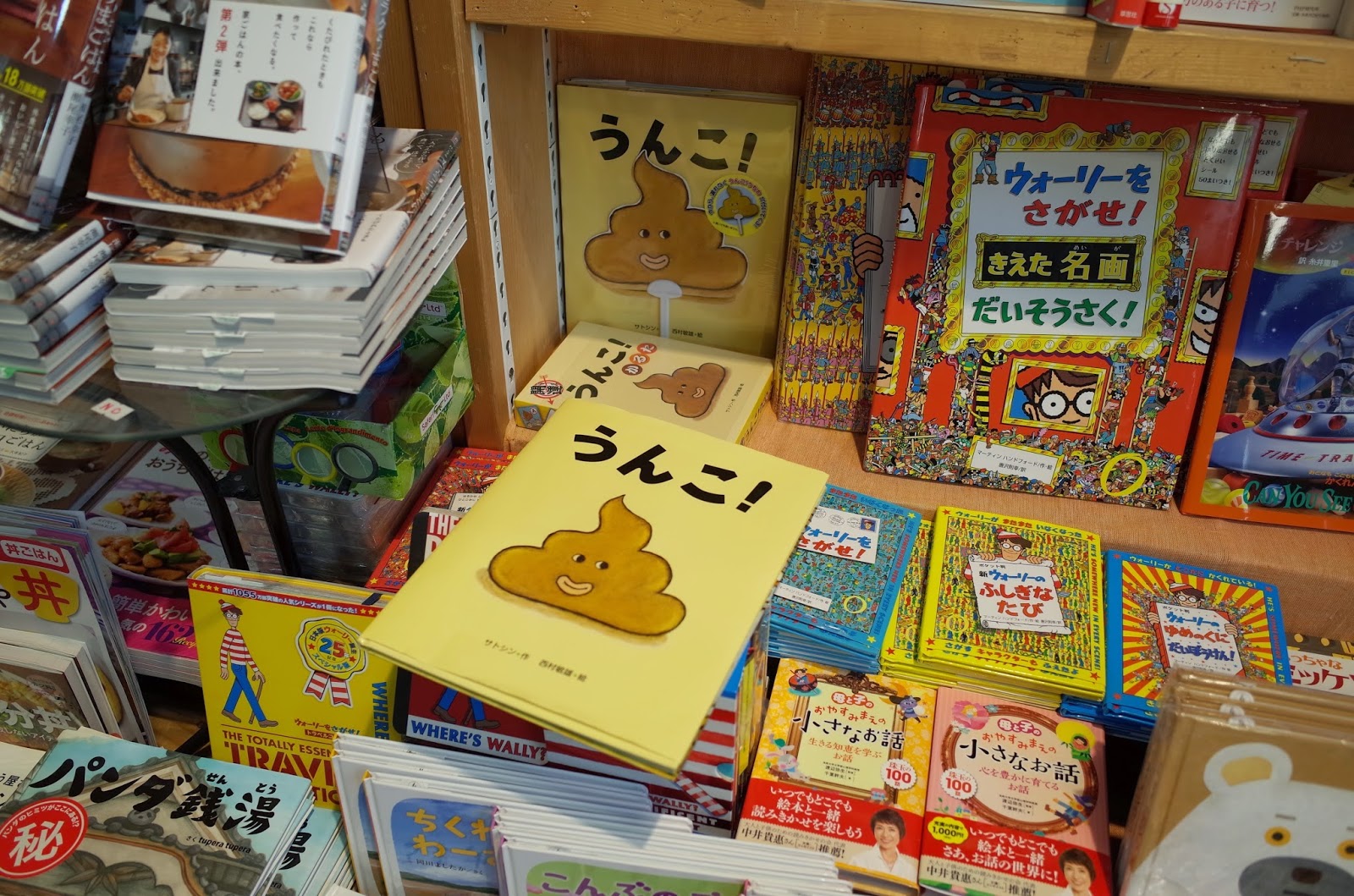 I was looking for some interesting books to use for a magic trick I want to do, and found books and karuta cards (Japanese card game) with うんこ ("unko", shit). Which was not appropriate for my needs, but would be a great gift for one of my friends.
Posted by Jonas at 5:03 PM No comments:

Everyone can get married 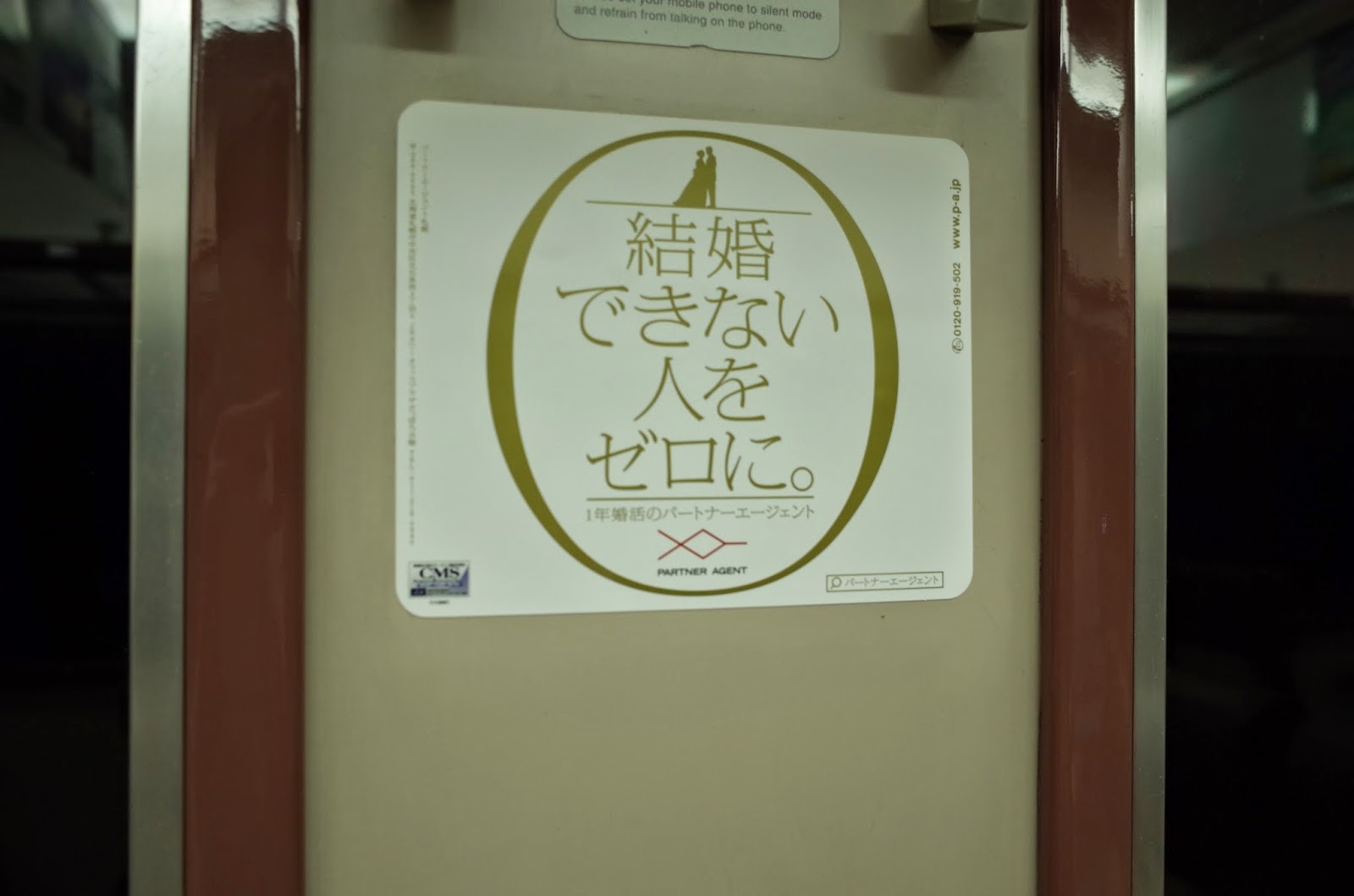 In a train I rode there was a notice talking about making "people that cannot get married" into "zero". Sounds like a difficult task.
Posted by Jonas at 5:01 PM No comments: 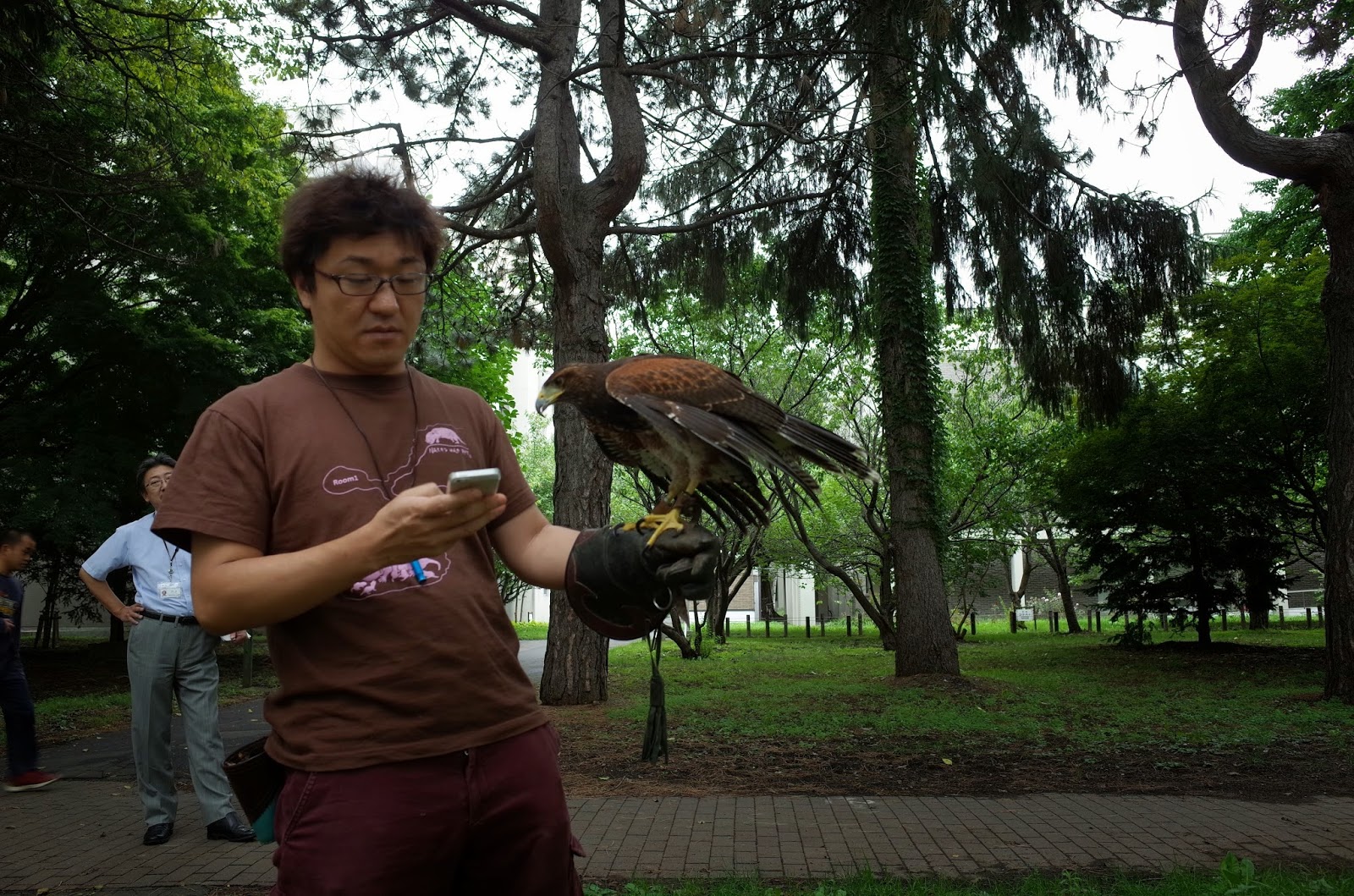 When I was out on my lunch break, I saw a guy carrying around a huge and very cool bird. I stopped to take a photo, and he then said: "Ah, Jonas!" and took a photo of me, haha. We met at an event where I did magic. He was going around inside our (enormous) university campus with this bird to chase away the large crows we have many of. 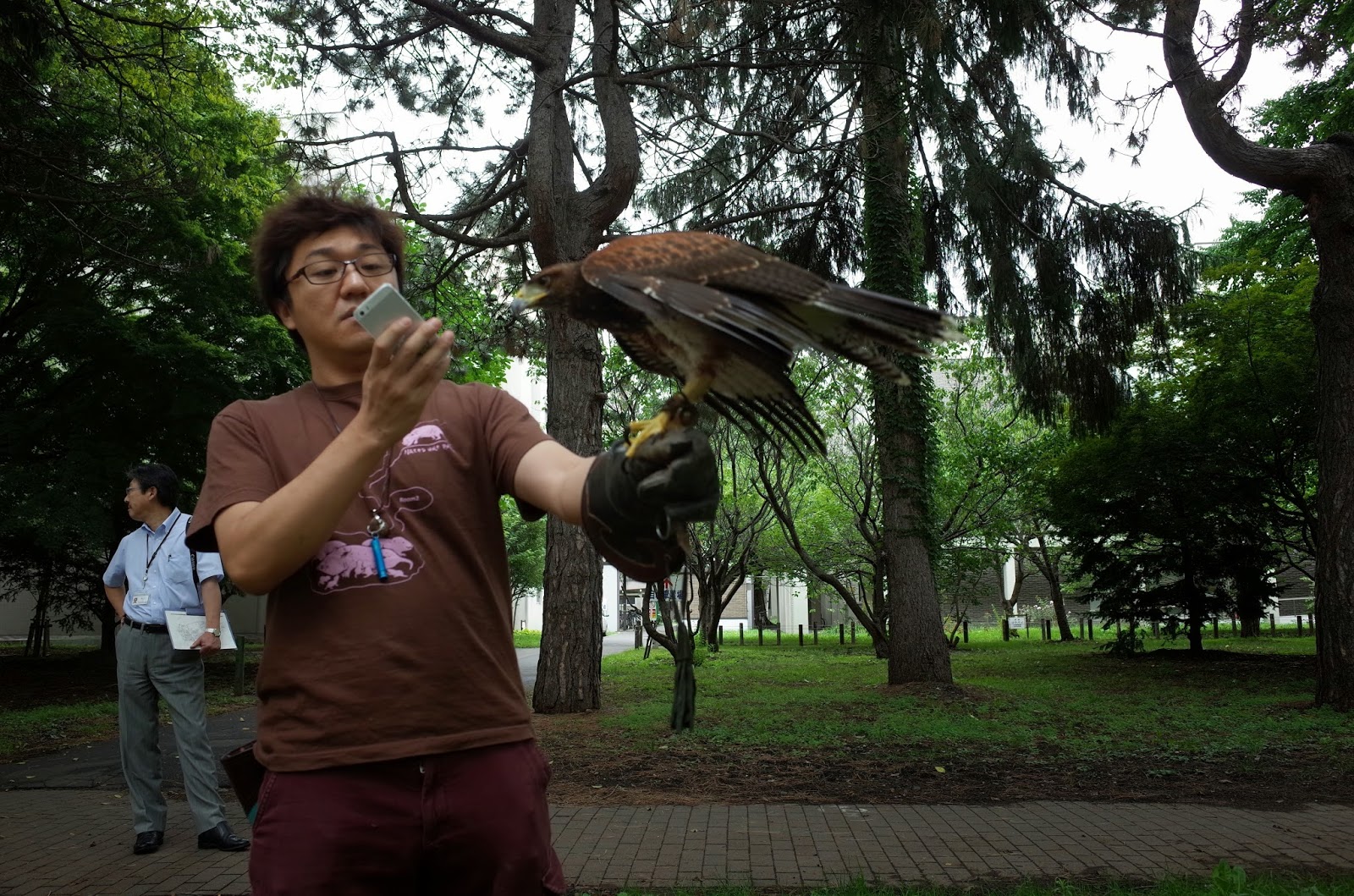 I was invited by some friends out in Sweden Hills to come over for some barbecue. They have their own fields, so the vegetables are always extremely good at their place. For instance, they dug up potatoes right before starting the barbecue.
They also had some Japanese fireworks. And lanterns from IKEA. 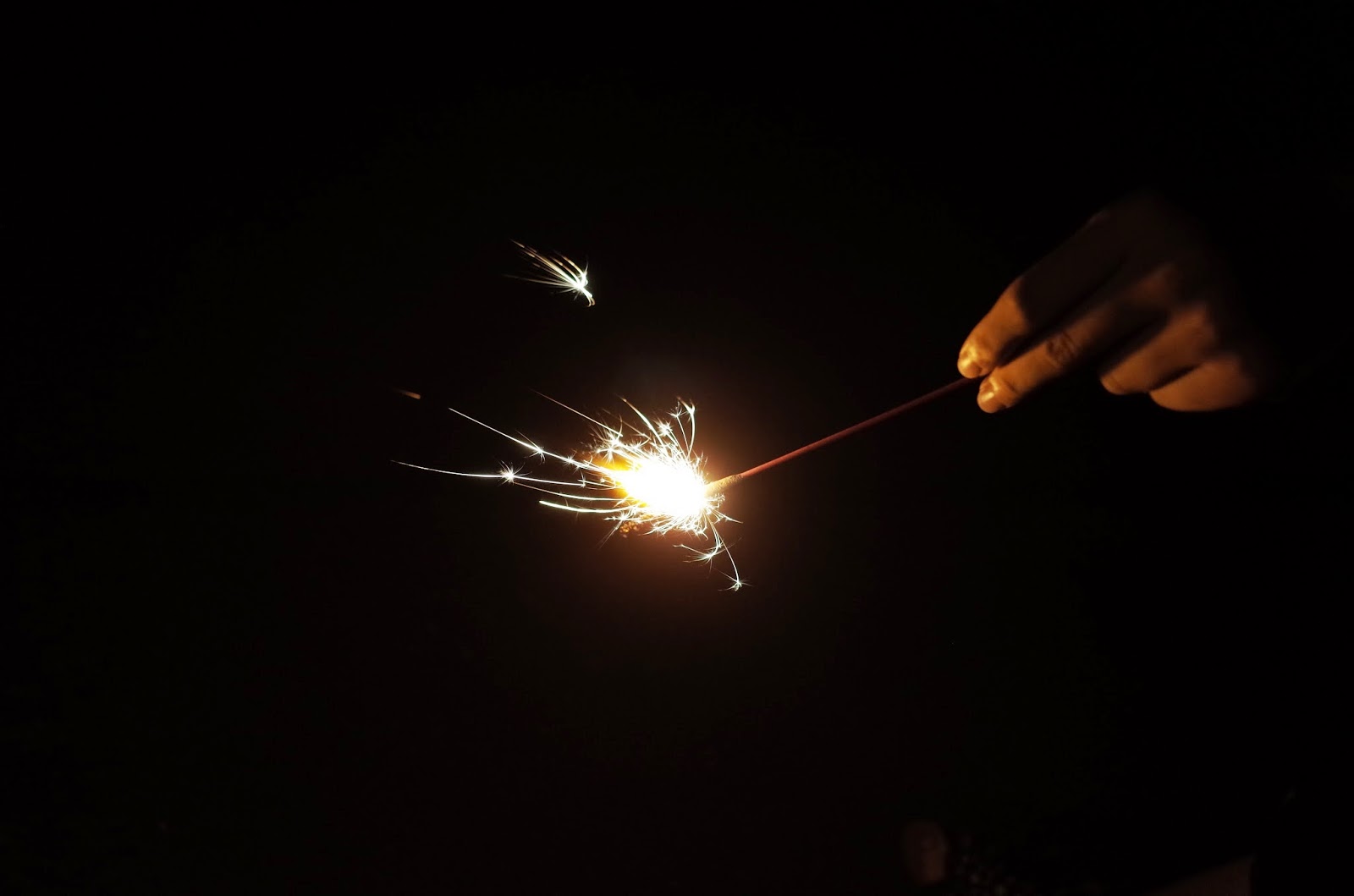 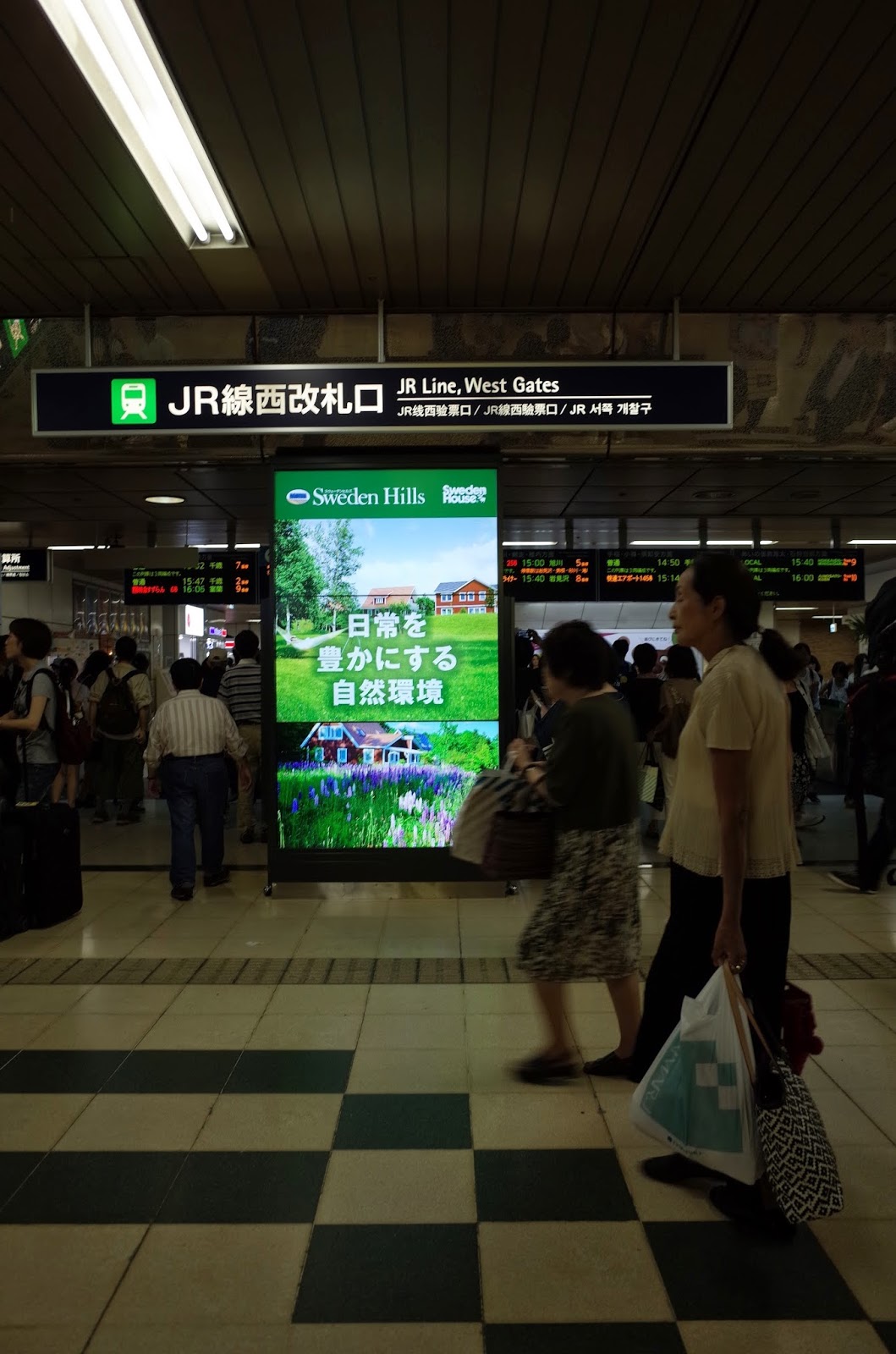 At Sapporo Station there was a promotional animation for Sweden Hills on a giant monitor.
Posted by Jonas at 4:51 PM No comments:

Me on TV again: waiting at a traffic light 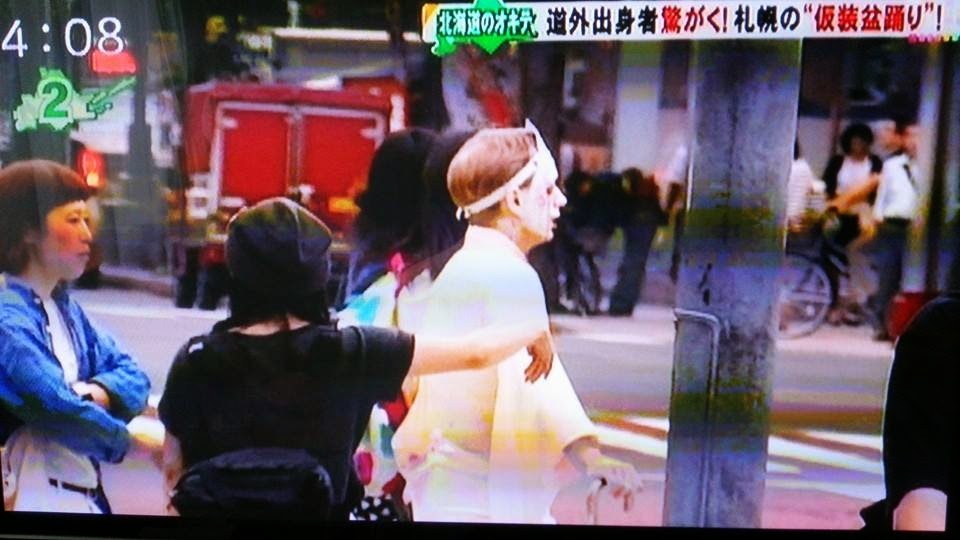 Some of my friends told me that I had been on TV. There was a program that showed things from the Bon-Odori costume competition, and even though I did not get a prize, I was featured in the program. They showed me dancing in front of the judges (below), and me waiting at a traffic light (above). I love it that they show a ghost just waiting for a green light, haha. 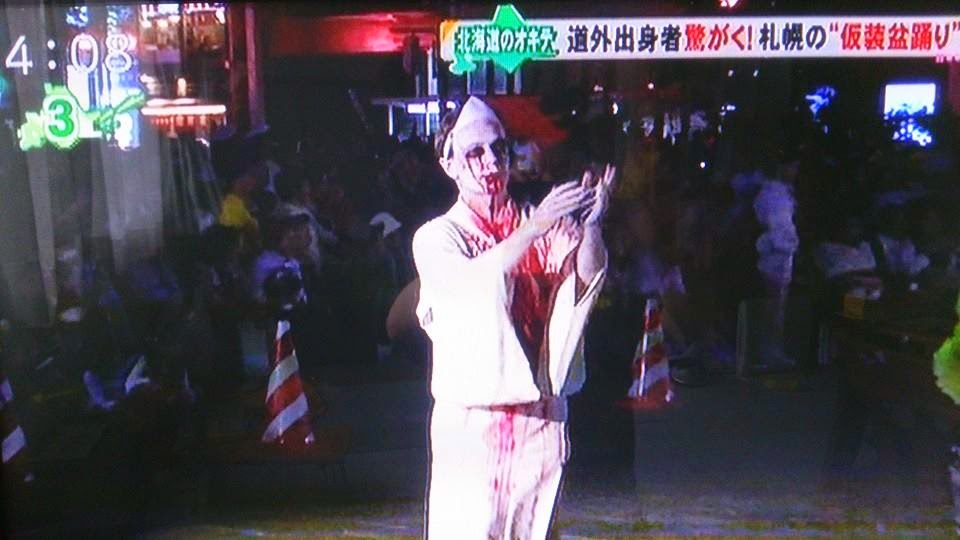 I did not have a chance to see this show myself. I do not have a TV, and it was broadcast when I was still at work. It would have been nice to know what they were talking about when they showed me. Did they say anything funny? The text overlay just says: "The tradition that people from outside Hokkaido do not know about; costume contests at the Bon-Odori."
Posted by Jonas at 1:22 AM 2 comments: 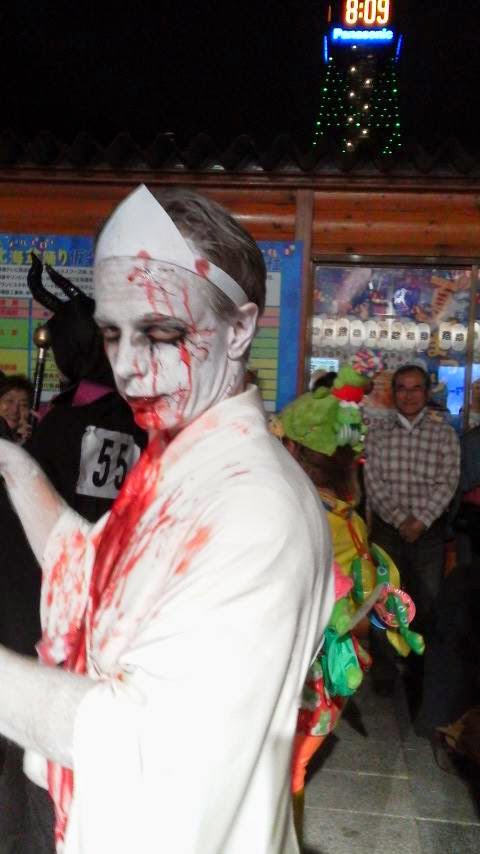 I put up a photo on Facebook saying: "It is O-Bon, the season of ghosts!", with me as a ghost. One of my acquaintances later wrote a comment saying: "My mother just e-mailed me that she saw a superb ghost at the Bon-Odori and that she took a photo. She will show it to me tomorrow. What if that ghost is Jonas?"

I answered that of course it is me. There were no other ghosts there.

The next day, this acquaintance sent me the photo above, which is the photo her mother took. It does indeed look a lot like me. The mother had said: "When I took out my camera, he turned my way and stopped moving, so I could get a good photo!" That is the kind of service I provide, haha.

I remember a woman taking a photo of me in the middle of the dancing (which must be this photo). So I have apparently met my acquaintance's mother.
Posted by Jonas at 1:18 AM No comments:

Returning to the living 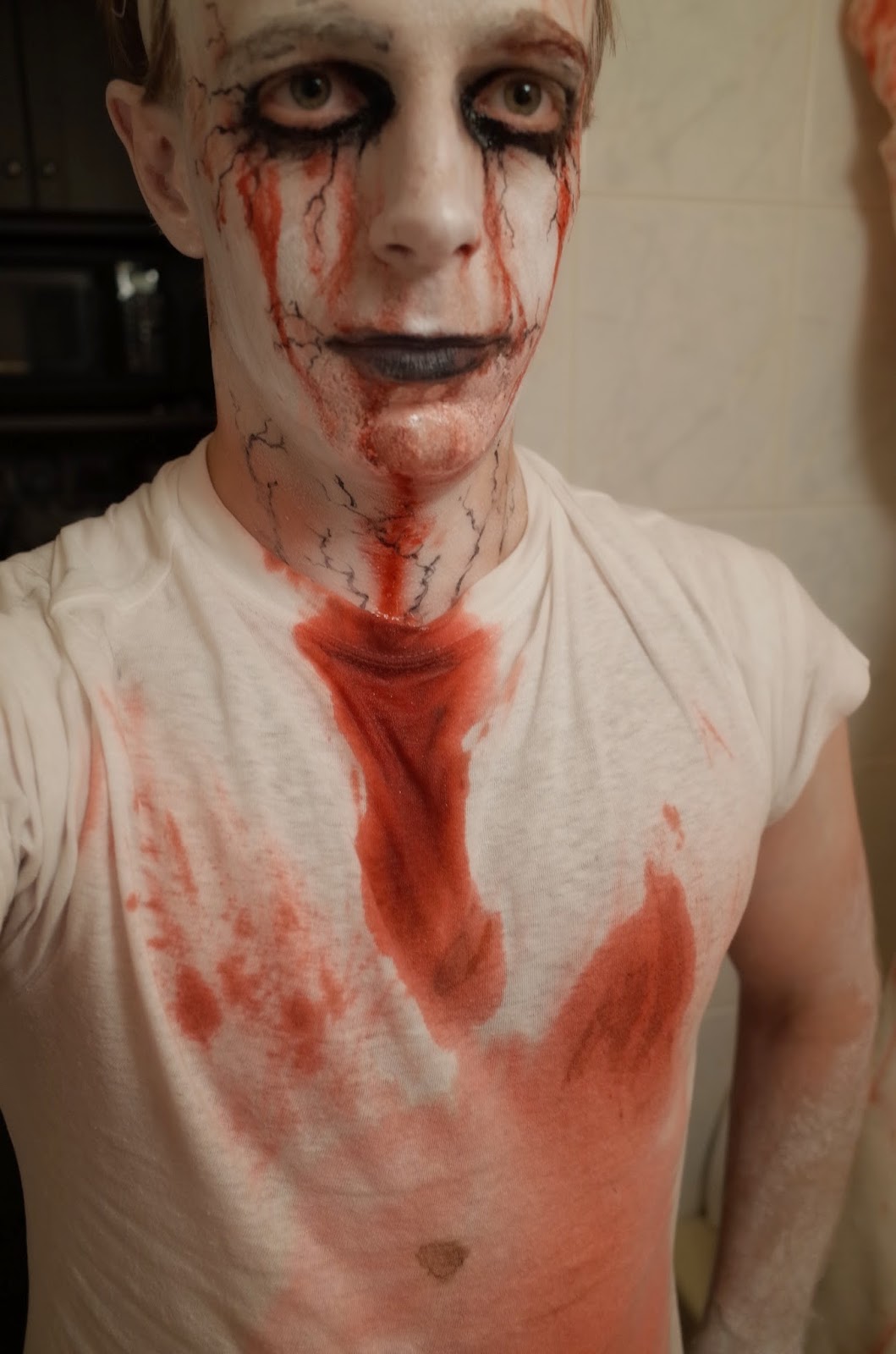 When I finally got home, I was glad I had worn a t-shirt under the heavy kimono. It was too hot, but on the other hand lots of the syrup based blood had seeped through the thick layers of kimono, and if this gets stuck in your chest hair it hurts a lot after it has dried... It took me an hour or so to get rid of most of the paint, but sitting at work the next day I found several spots of where white skin (elbow, toes)...
Posted by Jonas at 1:14 AM No comments:

Some of my friends thought it would be a good opportunity to take ghost photos in different places and in different ghost like ways when I was all painted up. Here are some of the results.


After the Bon-Odori costume competition, I went to a place called Ropossa to have some food. Several people that I know where there, and they took lots of photos of me. The food was good too. 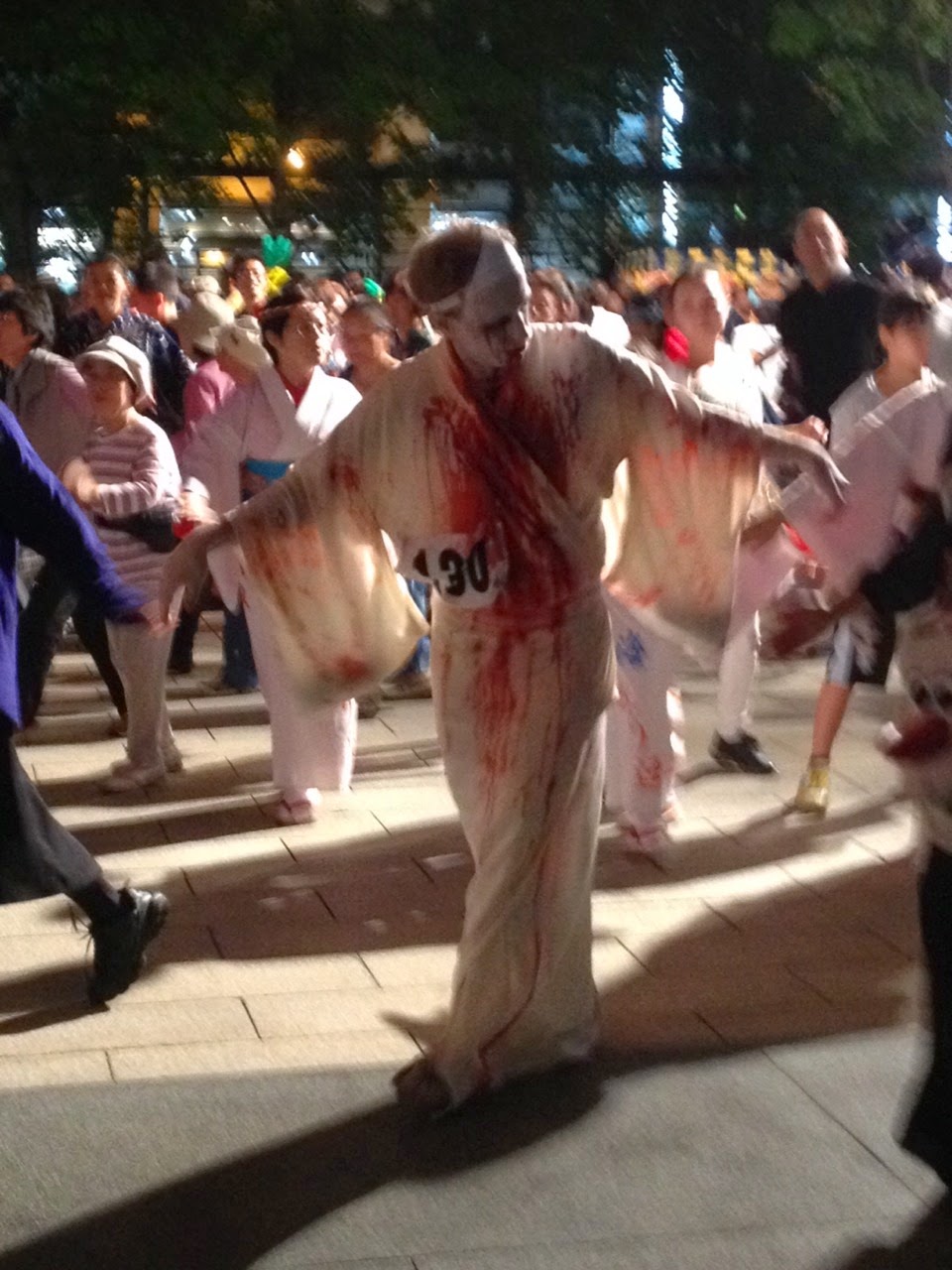 Lots of people that I know apparently watched the Hokkaid Bon-Odori costume competition. Some of them snapped photos of me dancing. I dressed up as a Japanese ghost (obake/yurei) and practiced a ghost version of the Hokkai Bon-Odori. The girl who took these photos said that the dance moves also had a ghostly impression. Since it was dark and I was moving (and my friends only use their cell phone cameras), all the photos are pretty blurry. 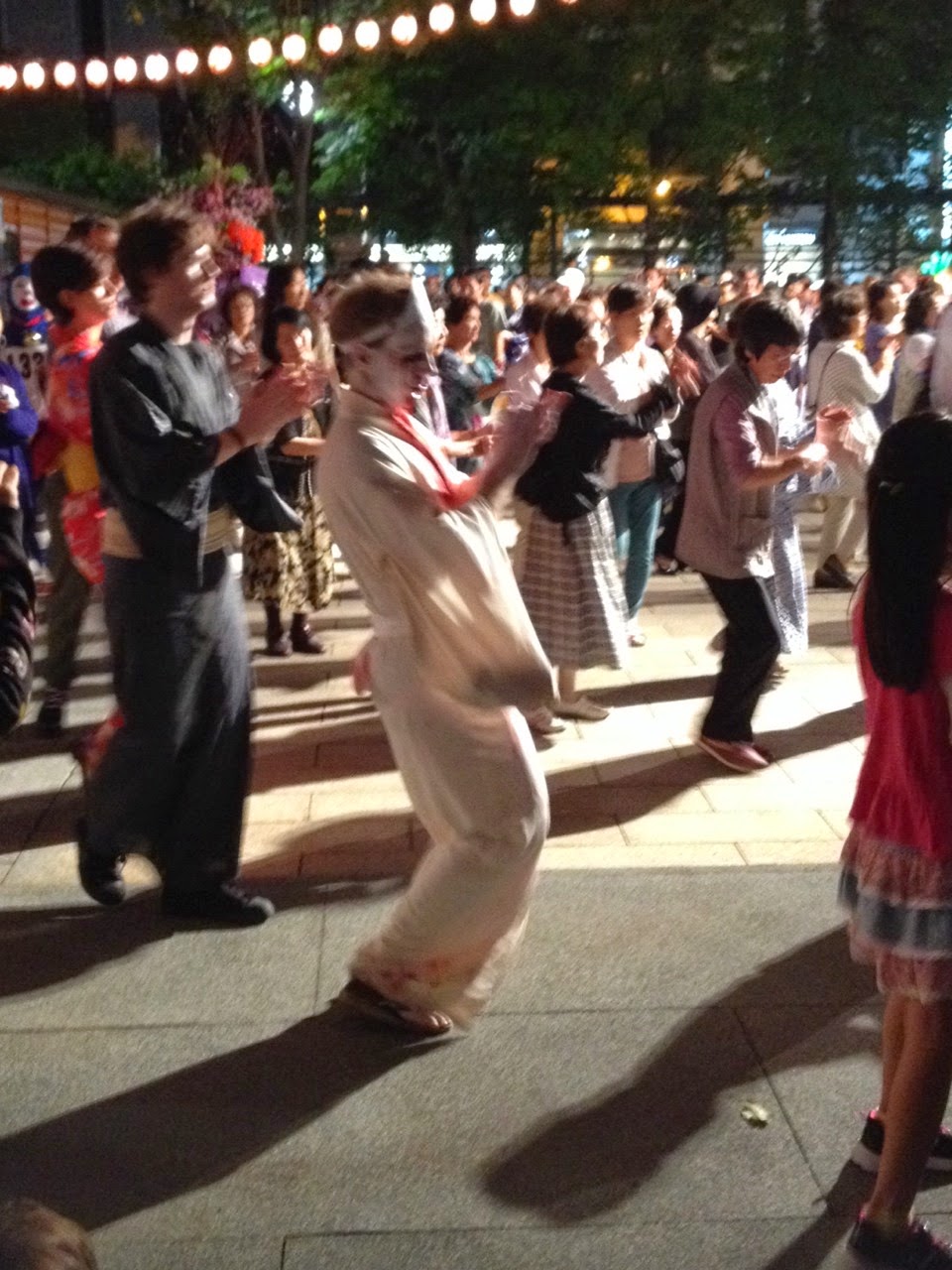 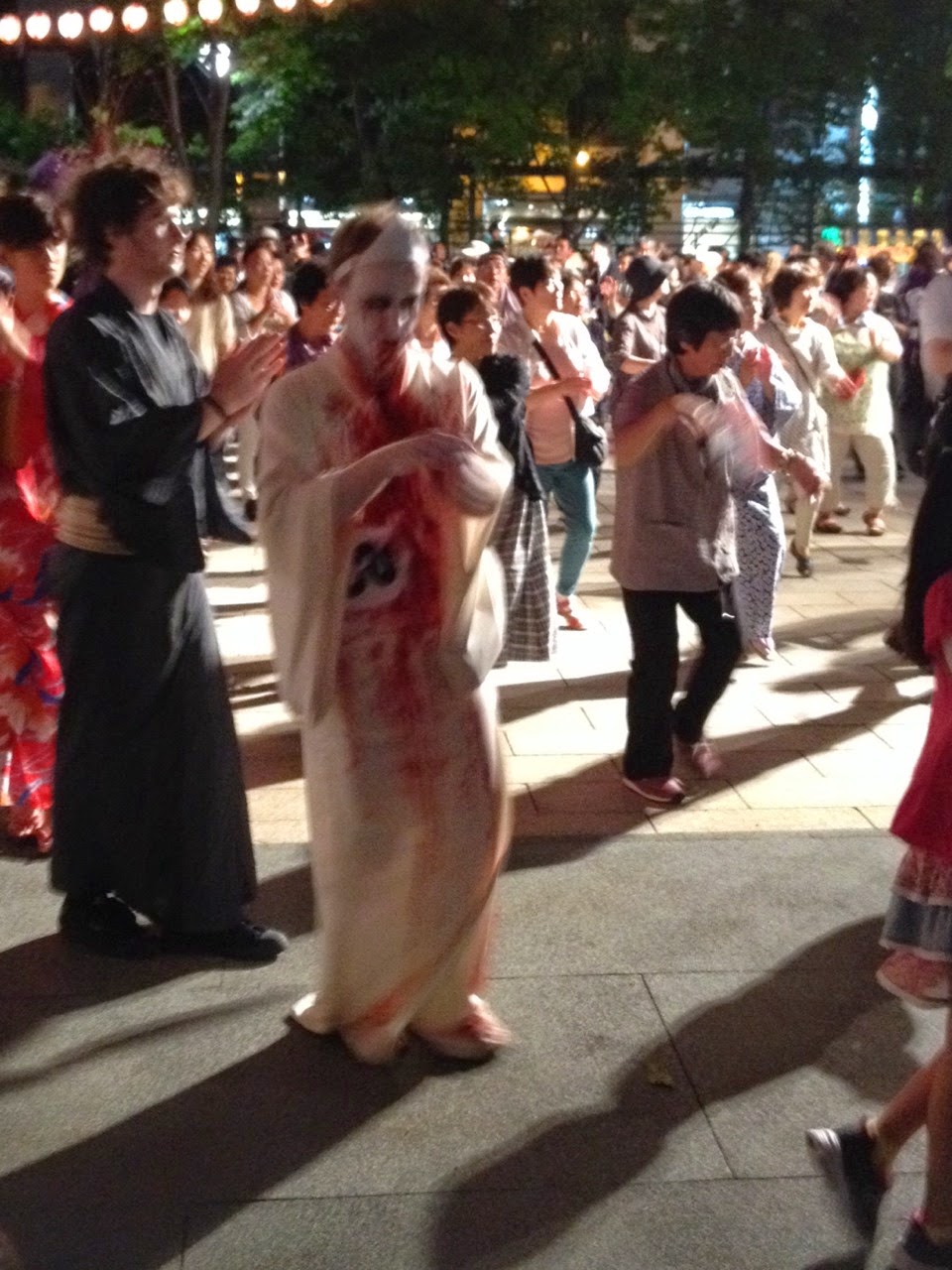 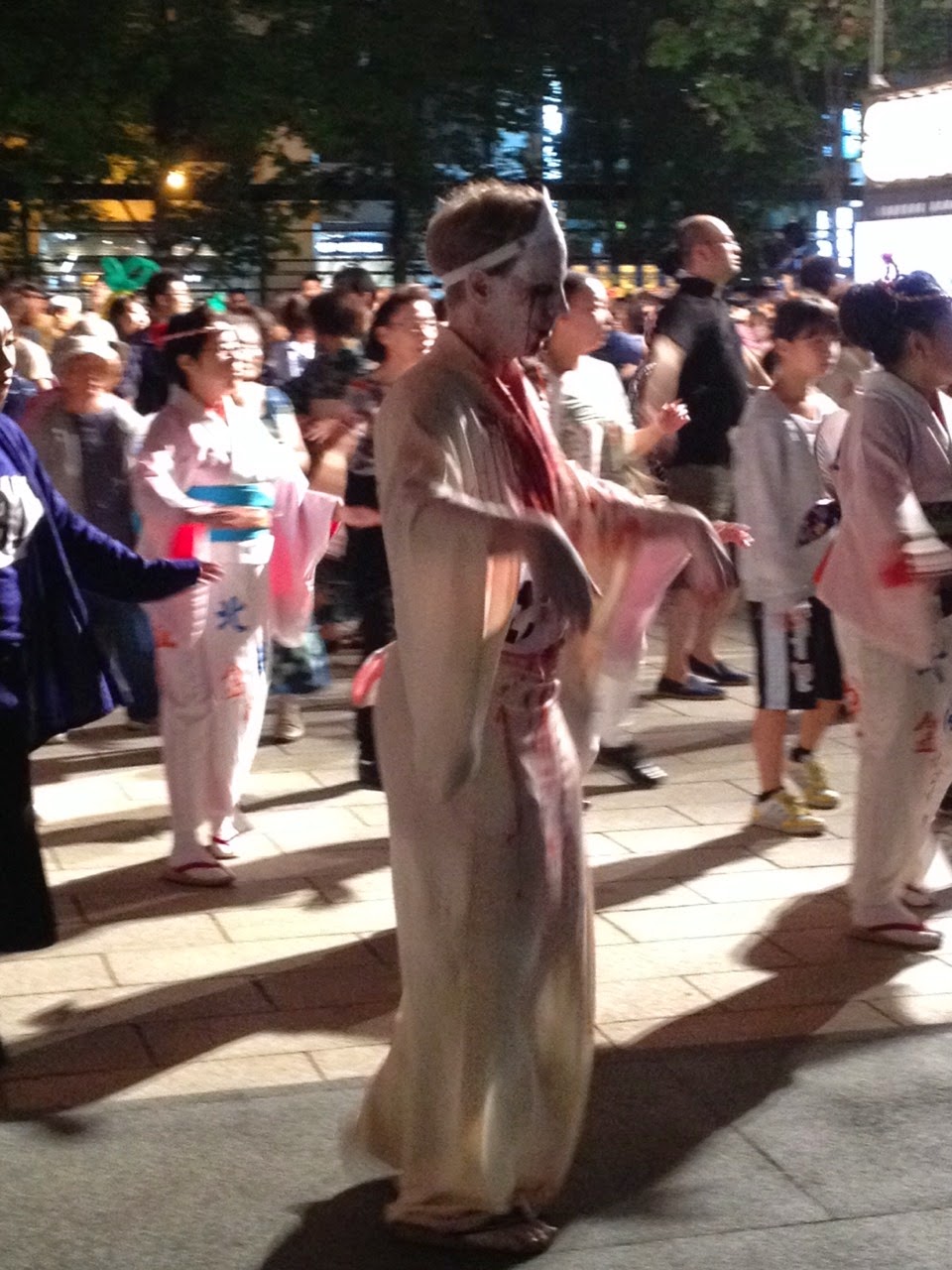 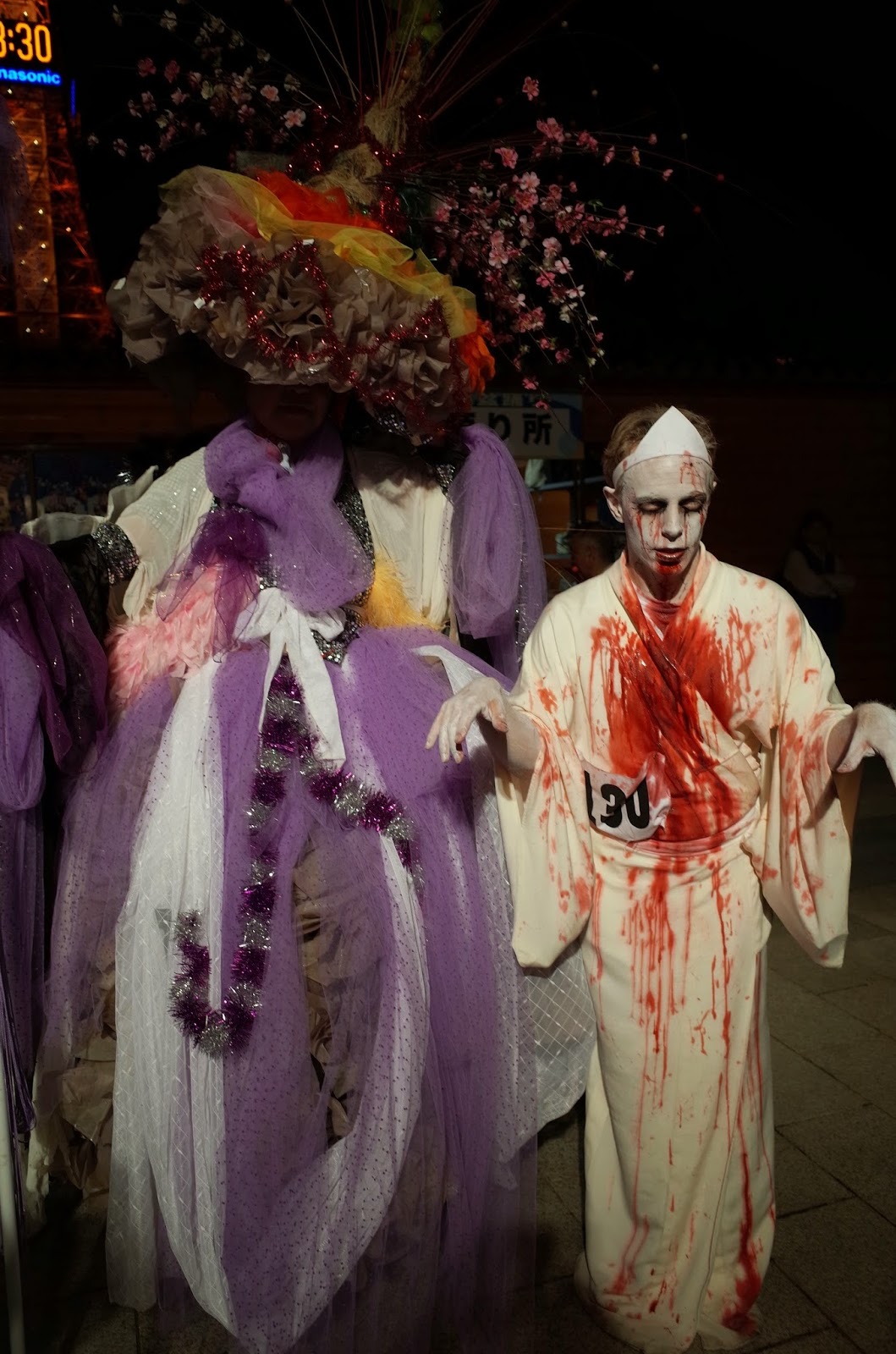 At 17:30 you registered and got white pieces of cloth with numbers that you had to stick to your chest and your back. I managed to find someone else who looked like they were also participating in the costume competition and asked them to pin my number to my back, which they kindly did. The actual competition was to start at 19:00, so you could join the kids Bon-Odori or just wait around, or put on your makeup, if unlike me you had not walked all the way through the city in costume.
While waiting around, lots of people came up to me and asked if they could take photos of me or together with me. Even more people took photos without asking. In total, I must have been in several hundred photos... One woman came up in a very nice summer kimono and asked if she could take a photo and then looked at me with a slightly surprised look. I recognized her too. She worked in a shop where I bought a bag and some yukata obis a while back, and she recognized me even through all the blood and makeup. She said that she would go check if there was a "spectators' prize" that she could vote for, and if so she would vote for me, haha. There was no such prize category, though.
At 18:45 you had to line up in a different section of the park and wait for your turn (I was participant number 130). One of my friends showed up and helped me pass the time. Two women in line in front of me (no. 127 and 128) were also pretty funny. One of them had her daughter with her, and the daughter thought I was very scary. In the end, she started crying... When it finally was your turn, you danced all alone to very quiet music in a big circle with a huge number of participants. At one end of the circle, 7 or 8 judges sat and looked at you when you danced by.
After passing the judges, you were sent to another section of the park where the normal Bon-Odori was open to everyone. The last day is always super crowded, but people in the costume competition are expected to dance in the outermost circle, and normal people are expected to go into the inner circles, so people watching get to see the costumes.
I had practiced a ghost-style variation of the Bon-Odori, and some of my friends that were there and saw me said that it was very appropriate. There were also old Japanese women cheering me on that shouted that they thought it was funny that I danced like a ghost, every time I passed the place they were standing.
After 90 minutes of dancing, which made parts of my water solvent facepaint melt, it was time for the prize ceremony. There was a prize for best kid costume, 4 special prizes, and then a countdown from place 5 to the overall winner. Of these 10 prizes, I did not get even one, haha. Two went to kids (the kid prize and one of the special prizes), two went to individuals (two of the special prizes), and the rest went to teams.
The kids and the people in the individual category were very good, as were some of the teams. There were also many other costumes that were extremely good but that did not get any prizes. I liked the predator and the Japanese "no cameras in the cinema"-character team, that even danced like that character.
After the competition was over, you could get some "participation prize" (consolation prize). You got two small cans or bottles with tea or energy drinks, and you could choose between a huge amount of tissues or a smart phone toy. I took the toy, since I get huge amounts of tissues in my mailbox for free anyway. The smart phone toy was one of the projection mapping boxes in the series that I bought myself a week or so back. This was a different design than the ones I bought, so that was pretty nice.
After getting my tea and energy drink, I ran into numbers 127 and 128 again. They said that they were surprised that I did not get any prize, but that we should definitely do costume competitions together some other time. Apparently the city of Mikasa has a grand prize of 500,000 yen in their Bon-Odori costume competition. That probably means there are many very good costumes so going there just to watch them would be interesting. My new-found costume friends said that we should meet again, but since neither them nor I would recognize each other again when out of costume, this may be difficult. They asked me for my business cards, so I gave them some that have my e-mail address, though.
I was sweating like crazy and my legs were tired, so I sat down and check my e-mails for awhile. A drunk Japanese woman that had talked to me before the competition came up and asked if I had won. I said I only got the consolation prize, and she was upset. She thought I had the best costume. She asked me: "Do you drink beer at home?" I said that I usually do not. She said that she had lots of beer cans with her and that she would give me some beer as a prize, since I had the number one costume according to her.

Some photos I got of some of the winners:
Posted by Jonas at 6:48 PM No comments: