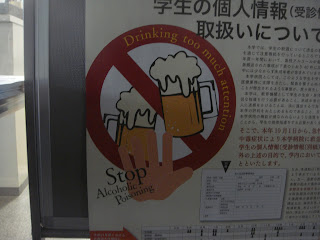 My university has a campaign called "Drinking too much attention". It aims to "stop alcoholic poisoning". I guess it would be good if we stopped poisoning alcoholics, but is it really a big problem here? Or anywhere?
Posted by Jonas at 3:10 PM No comments:

A few times per month, an old man selling Japanese crepes comes to the student cafeteria where I usually have lunch with my colleagues.

Two years ago I was trying to recruit members to the university magic club by table hopping (wandering from table to table doing magic) in the largest cafeteria on campus where all the new students eat. You go to a table with lots of young girls, do some impressive tricks to make them scream, and then lots of boys sitting at tables nearby see this and want to become magicians. Not that doing magic actually helps you get girls (though you can impress them for a short time), but young boys are easily fooled this way...

Anyway, one day the crepe man was also there, and after the main lunch rush had finished and I had visited all promising tables left, I went over to buy a crepe from him. He was impressed that I could speak Japanese and talked to me for awhile. After that, he always talks to me when I pass him trying to sneak out of the cafeteria, so I always feel obliged to buy crepes...

Today he was here again, and I (and my Greek colleague who is also easy to recognize/remember) had to buy crepes again :-) My idea of trying to lose a few of the kilos I put on in Europe last week is not doing so well. The mikan-custard-whip (custard cream, whip cream, and orange, wrapped in a very sweet crepe) crepe was pretty good and very cheap, though.
Posted by Jonas at 3:00 PM No comments: 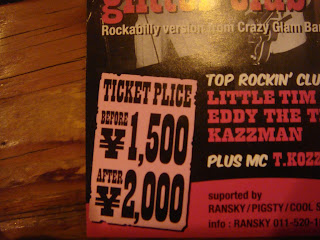 Last week there was apparently a rockabilly club event. The "ticket plice" was 1500 yen before and 2000 yen after. After what?
Posted by Jonas at 2:59 PM No comments: 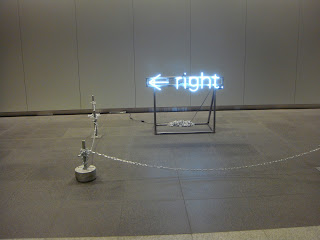 Japan, where many things are the opposite way to what you are used to: reading from right to left, driving on the left side of the road, etc.
Posted by Jonas at 2:55 PM No comments: 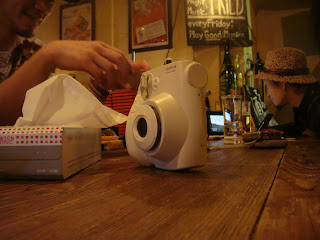 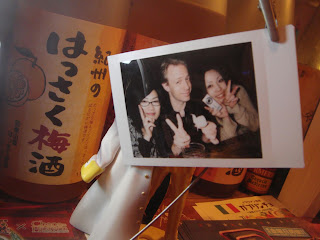 When I got back to Sapporo, I had a shower and then went out looking for food. In "Bottom Cafe", a place I often go to, I ran into a couple that I know. It was their four year anniversary, so they had been drinking and celebrating. They had taken purikura pictures, but they also had a Polaroid camera. It has been a few years since I last saw a Polaroid camera, but that is a nice toy! They took pictures of me, the staff, other guests, too.
Posted by Jonas at 6:39 PM No comments:

On Wednesday we started our journey back to Sapporo. It took about 26 hours from me leaving going out the door in Sweden until I was back in my apartment in Sapporo.

Sweden was rainy and cold, and in Sapporo it was snowing.

The trip went well, apart from my luggage being handled roughly by JAL (Japan Airlines), who usually are careful with my stuff, so one of the metal thingies are now hanging loose.

Email ThisBlogThis!Share to TwitterShare to FacebookShare to Pinterest
Labels: Stockholm

I had three goals with this trip to Sweden: visit my parents, visit my brother and his puppy, and watch magic at the magic bar in Stockholm.

Since I had Saturday, Sunday, Monday, and Tuesday in Stockholm that should not be a problem I though. I might even get to see the stage show they do at the magic bar (I usually go home to Sweden in the summer, when the magic bar is either closed or has no stage show because of summer holidays... so that would have been nice).

When checking who was performing now on their webpage, the results were: Saturday - booked for a private party (closed). Sunday and Monday - closed. Tuesday - no stage show (only during weekends)... A great shock!


Anyway, since Tuesday was the only time they were open at all, I went there after work. I managed to get there right before closing, and ordered a dessert and some tea. The magician Mr. Dannyman came to my table and showed me some magic, and I could also see him perform for a neighboring table.


He was very nice. I like his way of talking or explaining what is going on. Very ironic and funny. My type of humor. He did some tricks with ropes, rings, rubber bands, jumbo cards, and normal cards. I enjoyed his performance, and the people at the neighboring tables seemed completely floored. If only I could manage to be in Sweden when they have a stage show...

We had a nice dinner at a restaurant called "Salt" (which means salt in Swedish too). Wherever you turn inside this restaurant you see elks. There is an elk head on the wall, elk shaped decorations on the door, elk posters, etc. They also serve a lot of elk meat, though there are plenty of other things to choose from too. 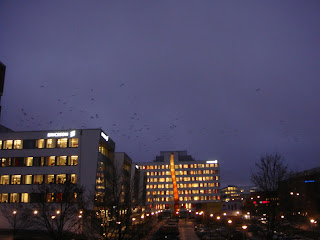 Since Sweden is quite cold in the winter, a lot of birds migrate to Africa where the winters are nicer. They gather in huge flocks and travel together. I tried to get a good shot of this flock of birds, but since it was dark and my camera is a bit slow in dark conditions, most of the birds had already landed on some building. There were many many more birds flying around just before this picture was taken.
Posted by Jonas at 4:46 PM No comments: 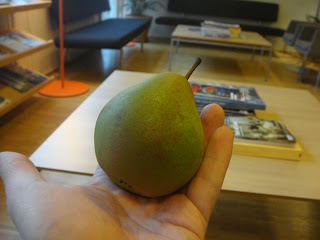 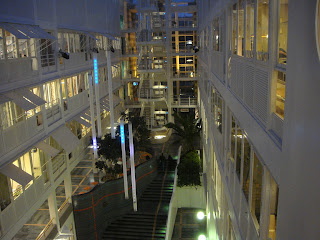 We visited SICS (the Swedish Institute of Computer Science) and held a seminar presentation there. SICS has free fruits! And they have an interesting art installation in the atrium where some rods display color patterns that are uniquely determined by information on cell phones carried by people entering the building.
Posted by Jonas at 4:44 PM 2 comments: 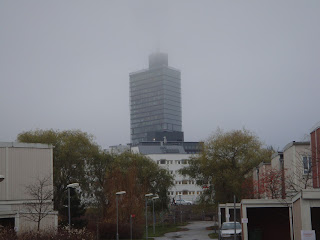 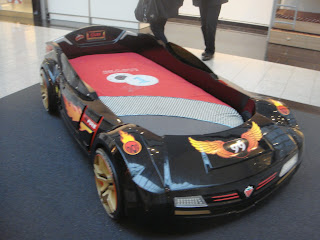 In Japan, Swedish furniture design (and other types of design) is famous for being simple but beautiful. Like this bed on display outside a furniture shop on my way to work.
Posted by Jonas at 4:32 PM No comments: 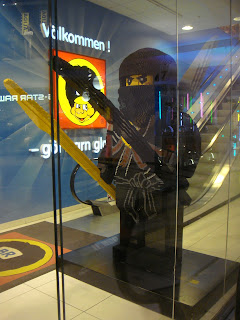 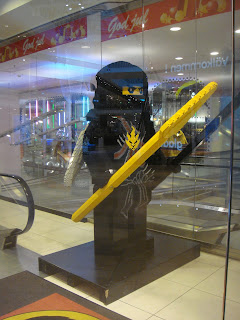 Outside a toy store there was a ninja made entirely from LEGO.
Posted by Jonas at 4:30 PM No comments: 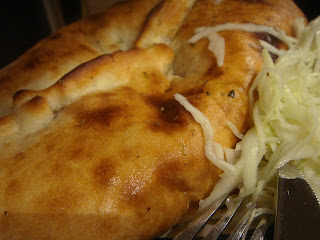 Pizza in Japan is not at all like pizza in Sweden (though both are good). In Japan, pizza is considered some form of luxury food. Probably the thinking is: pizza is Italian, Italian food is the world's greatest (or number two, fighting with French cuisine) and very high class and expensive, thus pizza must be luxury food and expensive.

In Sweden, pizza is considered junk food and is one of the few things you can eat without paying half your salary. And for some reason pizza in Sweden always comes with shredded cabbage.
Posted by Jonas at 7:08 AM No comments:

Christmas decorations: pretty ones and funny ones

Today I suddenly got some time to myself in the early evening (instead working late into the night) and took a look at the Christmas illumination and similar things they put up yesterday.


Today we spent the day at KTH (the Royal Institute of Technology) being shown interesting research in areas similar to our own and giving a short seminar on our own research.
Posted by Jonas at 6:59 AM No comments: 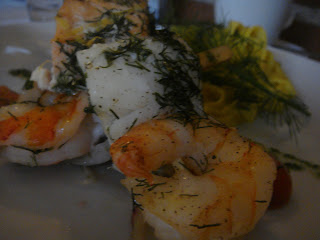 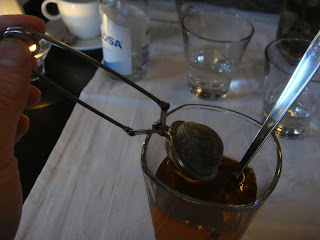 Today we had lunch at the Royal Institute of Technology (where I got my Ph.D.).
Posted by Jonas at 6:58 AM No comments:

Stockholm commuter trains, as unreliable as I remembered

Today I was supposed to meet my professor at his hotel and another Swedish colleague was also to meet up there. I am staying outside the city center and have to take the commuter trains into town. When I lived here before, the trains were very unreliable, especially during winter.

Just to be on the safe side I got out early, so even if the train I planned on taking would be late or even canceled, I could take the next train and still make it with time to spare. If they canceled both trains, I would be a little late, but almost in time, and what are the odds of that happening?

Apparently, the odds are pretty good. When I got to the station the board with train information announced that the train that should have left about an hour before I got there was coming to the station "soon". So they were about an hour behind schedule in the opposite direction, which meant no trains going there and then coming back in the direction I wanted to go... I also saw a huge mass of commuters, so I may not even get on the train if any showed up. So I gave up and called my dad to drive me to the subway (23 minutes away) instead.

The subway is more reliable, and I actually got to the hotel in time. On my way there, my colleague called me and explained that the commuter trains were having the normal problems, so despite him having had a 60 minute extra margin when starting, he would be at least 20 minutes late...

In Japan, trains are only late when there are natural disasters like earthquakes, hurricanes, or possibly snowstorms. And I have never seen a train that late even then :-)
Posted by Jonas at 6:50 AM No comments: 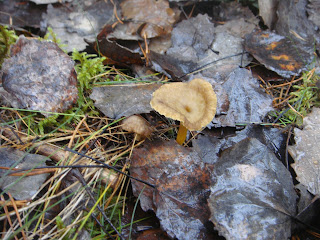 Since it is about to snow any day now, the mushroom season is pretty much over. There are still some left to be found if you know what to look for. When walking my brother's little dog, I found a grand total of two of a type I like a lot. One of them was later chewed up into pieces by the puppy, so today's catch was not that great... 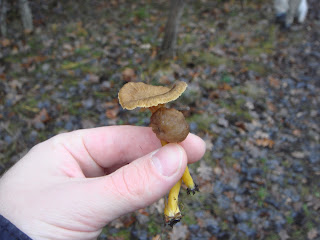 My parents have a new summer place since about two years ago. In the garden there they have apples, plums, strawberries, raspberries, blackberries, cherries (the best cherries I have tasted so far), and much more.

Apparently, they get huge amounts of apples and plums, and do not know what to do with all of it. They made jam, marmalade, put lots in the freezer, dried some, and made all kinds of dishes with fruits. They still have lots left, so they made plum pie and apple cake today.