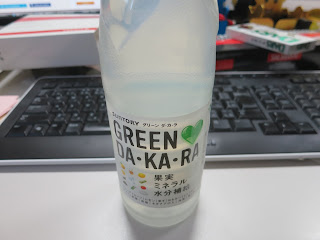 Today I found a vegetable drink that has all the minerals you could possibly need in our coop shop. The product name is "Green da ka ra". In Japanese, that means "because it is green". It is however not green. At all.
Posted by Jonas at 3:28 PM No comments: 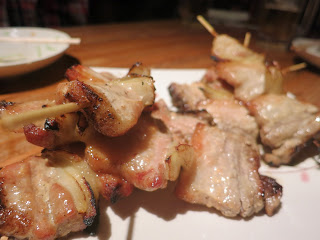 Yesterday I went out to eat yakitori ("grilled chicken", which means skewers of chicken but also allows for lots of other things, like bacon) with two colleagues. We go out twice per month and so. 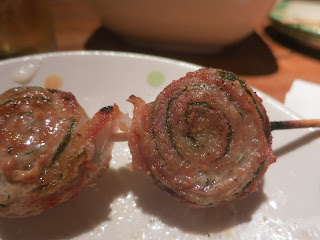 Yesterday's place was very nice. We also had long (7 hours) discussions on weather there is human caused global warming, if Jews came to Japan thousands of years ago and made Japanese people sing songs in Hebrew at Jewish like festivals, if you can call a system where groups of people around you can overrule your choices an anarchy, if Greek people are descended from aliens from Sirius, and many other things. 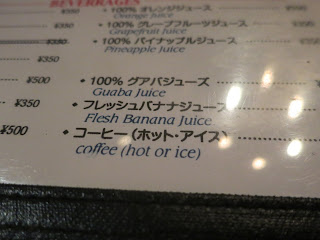 We also went to a New Orleans style bar (the first place closed at around midnight). There they served "Flesh Banana Juice" and other interesting things... ("r" and "l" are written the same in Japanese, so translations sometimes have this type of error).
Posted by Jonas at 3:25 PM No comments:

Today, I met three new people from Sweden (more or less, at least) who are currently in Sapporo. One of them is doing a six months post doc thing at the same university I work (though not in computer science but in dentistry), and the other two are the rest of the family.

One of them had found my blog, and learned that we have an "English conversation practice lunch" every Friday, so they showed up and joined us today. By this, we even managed to outnumber the Polish group, since only three Poles showed up today (sometimes six of them show up, though). They were very nice.

There are not so many people from Sweden in Sapporo. I know of 5 others, though there may be more Swedes here that I have not met. There is apparently a Swedish guy who has lived near Sapporo longer than anyone else (around 30 years) but no other Swede has ever met him. He is like Bigfoot or something, a legend that most people know but no one has seen him for real. My Greek colleague claims to have met him about a week ago, though. Reportedly, the Swedish guy lives on his own farm outside Niseko (a ski resort not far from Sapporo) and never comes to Sapporo.
Posted by Jonas at 4:23 PM No comments: 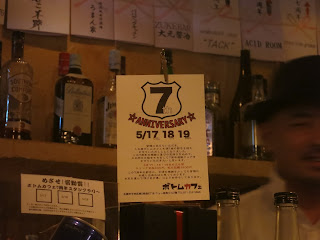 After the show, a magician friend who had showed up to watch my show took me to another place where he likes to drink. He said that a girl that works there also does a magic trick (apparently, she only does this one trick) and that she does it in a very cute way. As luck would have it, she was working yesterday, and she was free enough that she could show her magic trick to us. That was also a lot of fun.
Posted by Jonas at 4:18 PM 2 comments: 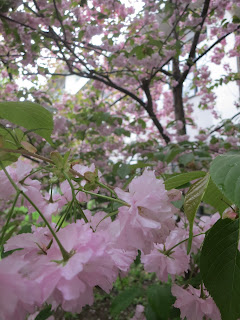 The cherry blossom season in Japan is a big thing, but it is also a very short season. Inside our university, you can still find some pink flowers, though. Despite the rain and storms we have had recently.
Posted by Jonas at 4:10 PM No comments:

Our student cafeteria has some dishes that are served every day, every year. There are also periodical dishes that show up for a few weeks and then disappear again.

Right now, there is an Okinawa & Kyushu special in the cafeteria, with dishes that are typical for those southern parts of Japan. The best dish now is "Taco rice". Tako is a Japanese word that when it comes to food usually means octopus. Japanese has many homonyms, and the word for kite is also "tako" in Japanese, as is the word for calluses. When written with kanji, they are of course all written with different kanji (蛸 for octopus, 凧 for kite, etc.) but when speaking, they are all "tako".

While homonyms are very common in Japanese, when it comes to food, tako usually means octopus since people do not normally eat calluses or kites. Taco rice has not octopus, though. Instead, here taco comes from English, and the dish has taco (the Tex-Mex style) flavored meat, cheese, salad, and rice. Okinawa has a lot of American marines, and apparently the dish was inspired by American Tex-Mex food and combined with rice (in Japan, the word for food is the same word as the word for rice, so most food has rice).

Recently, I don't know how many times I have had to have the conversation:
"Tako rice? So it has octopus?"
"No, here 'tako' comes from Mexican tacos."
"But tako in Japanese means octopus?"
"Yes, but Japanese has many homonyms. The taco in taco rice is not the octopus taco."
"But there is no octopus in this food!? And tako means octopus?!"
"Yes... and kite, and calluses, and tacos, ..."
"But where it the octopus?!"

Our French student told me he (after learning from me that taco rice is Tex-Mex tacos, not octopus takos) that he even had a similar conversation with our Japanese professor. 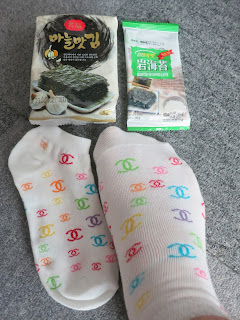 Yesterday one of my colleagues in the magic bar gave me souvenirs (omiyage) from Korea. He was in Korea for three days with his girlfriend. They even visited a magic bar over there.

I got a lot of Korean seaweed (which is very good), and a pair of Chanel socks.

Yesterday I also got a present from the magic prop maker Tenyo. If you buy three of their products they send you one more for almost free. I uploaded a movie of me doing their latest trick "Charisma", while wearing the Korean Chanel socks.
Posted by Jonas at 4:02 PM No comments:

This week they are selling used bicycles in the south part of the university campus. Since I have recently become slightly bored with student cafeteria food, I bought a bicycle so I can get outside the campus area during my very short lunch break. Our campus is the largest in Japan, and it takes me 15 to 20 minutes to get outside from our lab. Around the university there are many good restaurants though, so if you go by bike, there is a good selection of food available.

In Japan, 90% of all bicycles are silver colored, so finding your own bicycle inside the university is sometimes challenging. There are about a hundred other bicycles looking more or less the same heaped around your own bicycle. I usually search for the color of the lock, which is often the most distinguishing detail. The type of bicycle I bought (pictured above) is called a "mama chari", where "chari" is Japanese for bicycle and "mama" means mother. It is a type of uncool bicycles used by housewives when they go shopping etc. It is also the most common and most practical bicycle to have.
Posted by Jonas at 2:51 PM 5 comments:

Hanami (Cherry Blossom Viewing) with no hanas to mi

In Japan, cherry blossoms is a big thing. There are special reports on TV on how far north in the country the cherry tree blossoming line has progressed, there are things like weather reports that only do prognosis on when the trees will be in full bloom etc. When the cherry trees blossom, Japanese people do "hanami", which means "watch flowers". This means going to a place with lots of cherry trees and having a pick-nick or barbecue.

In Sapporo, the hanami season is around May 7. This is very close to the Golden Week, a week with five (non-consecutive, though) national holidays. If you are lucky, the cherry trees will look nice at the end of Golden Week here. In the south, I am told they have hanami already in January (Okinawa), so we are very late.

This year, the weather was really bad, with heavy rain during Golden Week. The cherries were in full bloom earlier than usual (it has been a warm spring) but all the petals rained away.

I went to a hanami party anyway. It started raining that day too, but it stopped again after 20 minutes of heavy rain. There was lots of food and drinks. There were also quite a lot of interesting people to meet.


The thing that surprised me the most was that there was a girl there who said to me "You look much younger in your passport photo!". That I look younger in that photo, which was taken 11 years ago, is not surprising, but the fact that she has seen my passport photo is. It turns out that she is the girl who does all the bookings for our business trips, so she knows me, my Swedish colleague, our professors, etc. She deals with our part of the university. She even asked me about our British colleague who used to travel so much but recently has not asked for any tickets at all (he now lives in the U.S.). Small world. 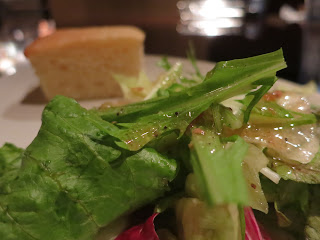 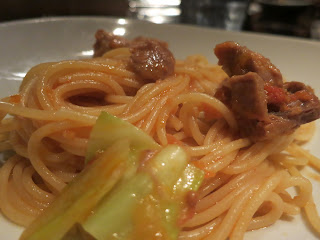 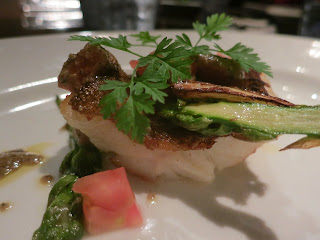